Home Primary Case Studies Stand up, Speak out and Make a Difference in Bradford

Stand up, Speak out and Make a Difference in Bradford

A project led by Remembering Srebrenica Community Champions in Bradford is creating hundreds of young Ambassadors to ensure that the lessons from genocide reach a wider audience. 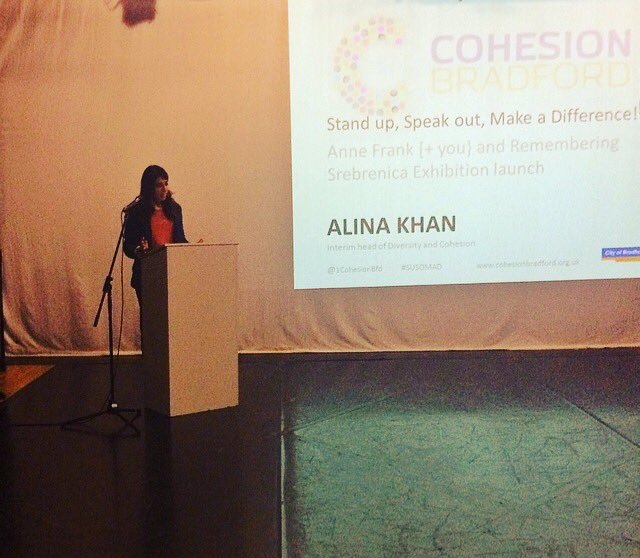 Stand up, Speak out and Make a Difference (SUSOMAD) is an inspirational project run by Cohesion Bradford, led by Remembering Srebrenica Champions Alina Khan and Geraldine Cooper. This project sends roaming exhibitions about the Holocaust and the Srebrenica genocide to visit schools around Bradford.

The SUSOMAD project was established six years ago and Srebrenica was included in the exhibition following Alina’s participation in a ‘Lessons from Srebrenica’ delegation in 2015. This followed on from a motion passed by Bradford City Council to commemorate Srebrenica in the city every year, and it therefore became a education priority for the city to ensure young people learnt the important lessons from the genocide.  The project is an exceptional example of educating young people on the importance of tackling hatred to build a cohesive community.

At its heart, the project has three core aims: to train young people as Srebrenica exhibition guides, thereby empowering them with knowledge to improve their community; to provide young people with the confidence to discuss the relevance of Srebrenica to society in the UK today; and to help teachers and staff to handle controversial issues both effectively and sensitively.

This project trains about 150 young people a year to become SUSOMAD ambassadors by teaching them about the life of Anne Frank and the Srebrenica genocide in 1995. When in a school, the exhibition is presented to the students by their peer ambassadors, in a very powerful peer-to-peer education programme. Critically, they discuss the importance of the lessons that can be learnt from the events in order to tackle prejudice in our own communities. 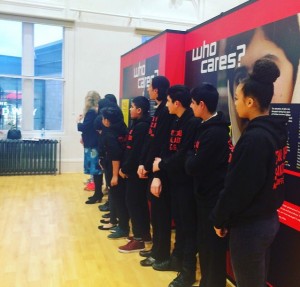 The young people involved in this project are an inspiration; they are passionate, eager to learn, and driven to tackle prejudice within their own community. They encapsulate the aims of Remembering Srebrenica by learning the lessons from the genocide in order to create a more cohesive society for all. The importance of this is clearly communicated by the young ambassadors, some of whom have experienced prejudice themselves, and their passion for tackling hatred shines through.

They talk passionately about the effect it has had: ‘For me, being an ambassador has been a unique and special experience.’ Said one student ambassador, ‘It has really improved my confidence and I have met some very interesting people along the way. The exhibitions definitely opened my eyes to a darker world.’

At the SUSOMAD launch in April, they spoke with confidence, understanding and compassion about the events in 1995, demonstrating an ability to communicate not only the facts, but also the relevance of these events to their own lives and the lessons that we need to draw upon for our own society. The achievements of these Ambassadors was also recognised at an awards ceremony in October 2016, where Remembering Srebrenica’s Director, Amy Drake, gave the keynote address in which she praised the programme for allowing young people to address the issues that are most important to them, such as human rights, prejudice, discrimination, extremism, hate crime and challenging intolerance. 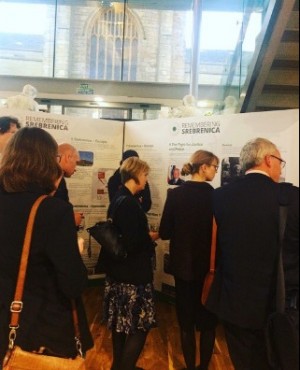 St Bede’s Catholic School, who participated in the programme, spoke highly of it: “Our boys got so much from being ambassadors, their self-esteem and confidence improved and they all feel that they achieved something from it. Some of our boys are becoming ambassadors for our school and we are promoting the Anne Frank Exhibition and anti-racism in the school by displaying the work that they completed. It is a fantastic opportunity for pupils to gain so many different achievements and I highly recommend it to other schools.”

My trip to Bosnia with @SrebrenicaUK was among the most powerful experiences of my life. https://t.co/cjBsk7SYFC