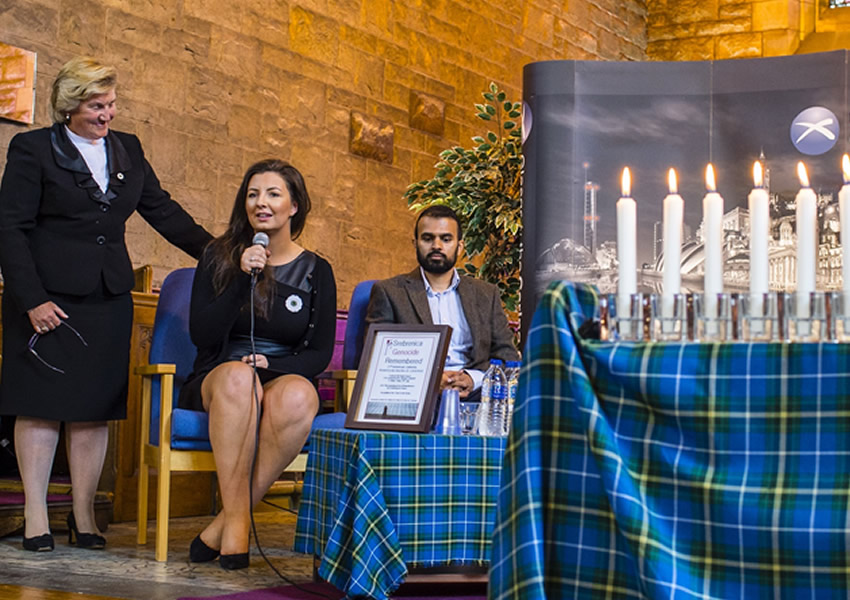 The Board of Remembering Srebrenica has organised powerful commemorations for Srebrenica Memorial Week since 2014. These events have brought together people from all sectors of society to learn the lessons from the genocide, hear survivor testimonies and pledge to build a more cohesive, stronger and safer society in Scotland.

Remembering Srebrenica Scotland held their commemoration for the 22nd Anniversary of the Srebrenica Genocide on Friday the 14th of July at St Mungo’s Museum of Religious Life and Art. Leader of the Labour Party in Scotland, Kezia Dugdale MSP spoke alongside the President of the Association of Women Victims of War, herself a survivor of rape, Bakira Hasecic.

You can watch the key moments from the commemoration in this video taken by STV:

2017 – White Armband Day, Scottish Parliament
A special event hosted by Ruth Davidson MSP and Johann Lamont MSP at the Scottish Parliament brought together MSPs from all parties who pledged to remember the victims of genocide in Bosnia-Herzegovina and bring communities in Scotland together to tackle hatred.

The National Commemoration for Scotland, organised by our Scottish board under the chairship of the very Reverend Lorna Hood, was held at Cathcart Old Church, Glasgow on Friday 15th July last year. Members of a recent Young Leaders Delegation, Sarah Farrell and John Loughton, spoke of their experiences in Bosnia and how they will share these with young people in Scotland, there was powerful testimony from Srebrenica genocide survivor Nedžad Avdić and Amra Mujkanovic and Tariq Ishaq spoke about learning the lessons from Srebrenica.

The National Commemoration for Scotland on the 20th anniversary of the genocide was held at St Giles Cathedral on Friday 10 July. Speakers from different faith organisations spoke along with survivors of the genocide and Mothers of Srebrenica. First Minister Nicola Sturgeon spoke movingly about the genocide, and hosted a reception for guests at parliament following the event.

The first commemoration is Scotland was hosted by External Affairs and International Development Minister, Humza Yousaf, at Bute House, the home of Scotland’s First Minister in Edinburgh. He said:

“The reception marking Srebrenica Memorial Day was not just about remembering the past. It will also act as a lesson for generations to come about the need to confront prejudice and hatred. It is important that Scotland’s young people learn from the lessons of the past to shape their future, so they can become responsible global citizens. Events such as Srebrenica demonstrate the need for all young people to have an understanding of, and respect for, other religions, races, beliefs and attitudes.”