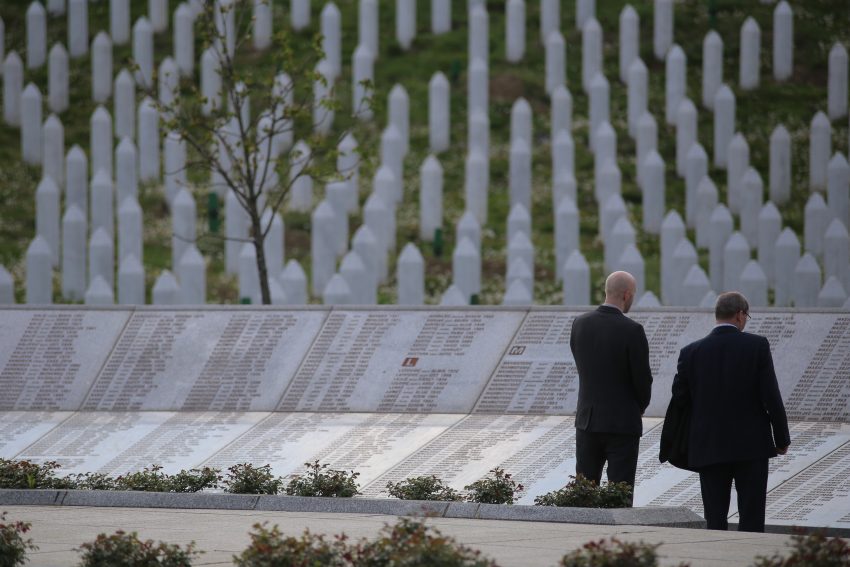 This year is the 21st anniversary of the Srebrenica genocide and the United Kingdom’s Srebrenica Memorial Week runs from Sunday 10 July to Sunday 17 July 2016. Our theme to mark this milestone anniversary is ’21: Coming of age – time to act’. This was launched by Minister of State Baroness Williams, in the House of Lords, on Monday 11 January 2016 you can see photos from the event here.

Twenty-one represents a coming of age – a passage into adulthood. Thousands of Bosnian young people never had the chance to celebrate their coming of age and were systematically murdered because of who they were. The youngest victim of the genocide was just two days old – shot in the head. The child would have turned 21 this year.

We live in turbulent times. As we witness increasing levels of hatred, particularly anti-Muslim hatred, it has never been more important to engage with young people and teach them that such hatred leads to genocide.

We aim to inspire Britain’s young people to join older generations in challenging hatred in our communities and help create a more cohesive society for all.

By doing so, we not only honour thousands of people brutally murdered for who they were, but we celebrate the hope that rises from the darkest times. Now, in 2016, it is time to act – not just for our young people, but for each and every generation. More than ever, it is vital that we come together to ensure that hatred of the kind witnessed in Srebrenica 21 years ago never takes root in our society.

Prime Minister David Cameron gave the keynote address at a reception in 10 Downing Street, whilst President Bakir Izetbegović addressed 2,000 guests at Westminster Abbey. HRH The Princess Royal represented the UK at commemorations at the Srebrenica-Potočari Memorial Complex on 11 July.

Read more about our achievements in 2015 in our special downloadable booklet.

In 2016, we are calling upon UK communities to:

Whether you have 5 minutes, 30 minutes or 60 minutes,  you can make a real difference – download our infographic to find out how. Please do tell us what you decide to do, so that we can publicise your contributions on our website.

Our enduring symbol is the Srebrenica flower. Its 11 petals reflect Srebrenica Memorial Day on 11 July and are white and green representing the innocence of those killed and hope for the future. You can purchase hand-made flower badges and help us raise funds.

Remembering Srebrenica called on UK secondary schools to take part in The 8-3-7-2 Srebrenica Memorial Tournament, which saw 1,000 young people in schools across Britain to play football on the same day – Friday 5th June.

Bosnian international goalkeeper and Tournament ambassador Asmir Begović backed the flagship event. The tournament encourages pupils to learn lessons from the genocide, with the figure 8372 representing the number of individuals who lost their lives during the genocide. We plan to stage the tournament again in 2016.

Spreading the Srebrenica story in schools

We have developed education packs which will reach 20,000 pupils by mid-2016.  These allow teachers to use the lessons from Srebrenica in Personal, social and health education (PSHE) classes to illustrate how genocide can grow if hatred and intolerance are left unchecked.

Remembering Srebrenica’s aim is to bring communities together to challenge hatred and intolerance whilst promoting a cohesive society. Our nine Regional and Country Boards help us to do this by organising and co-ordinating memorial events in their areas.  If you wish to get involved in the activities of your region or country please contact us at info@srebrenica.org.uk.

Huge thanks to @OliviaRMW & colleagues for #HMD2021 updates, & facilitating opportunities to hear from so many organisations doing such important & innovative work in these extraordinary times.

This week marks the opening of the Srebrenica-Potočari Memorial Centre where 600 victims of the Bosnian genocide were buried in 2003. Since then the Memorial Centre continues to hold a yearly mass burial and memorialise the genocide as well as its victims and survivors.

Today marks #InternationalPeaceDay. Established in 1981 by unanimous UN resolution, Peace Day provides a shared goal and commitment to a culture of peace. As a charity that works to memorialise the Bosnian Genocide, we remain committed to educating on the importance of peace.