Almost a thousand school children are taking to football pitches across Britain today to open the scoring against hatred and intolerance in a nation-wide football tournament to mark the 20th anniversary of the Srebrenica genocide. 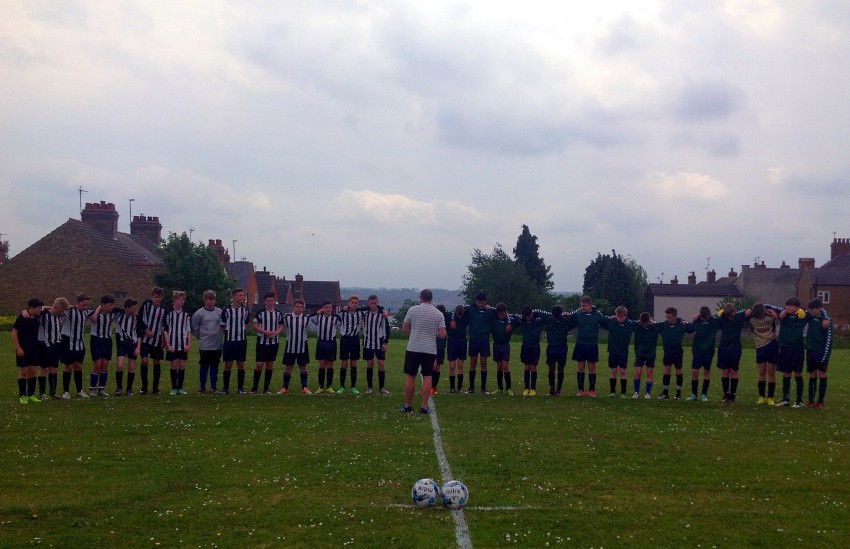 Teachers at scores of schools across the UK have signed up their pupils to take part in Remembering Srebrenica’s ‘8-3-7-2 Memorial Tournament’, which aims to get young across the country playing football on the same day – Friday 5th June.

Huxlow Science College, in Northamptonshire, are among those taking part in the tournament. The school is fielding two 11-a-side teams of pupils, aged from 12 to 14 – pitching young footballers in Year 8  against their counterparts in Year 9.

Like other young footballers across the country, they observe a minute’s silence –  pictured above – in memory of the genocide victims before the game.

We are honoured to take part in this tournament.  It is important that we remember this by playing football because of how recent it was.”

Fellow student Zak Campbell added: “Football brings people together and it is a good way of remembering how bad it was.  We don’t want it to happen again.”

The winning team from each school goes into a draw to meet tournament ambassador Bosnia-Herzegovina goalkeeper Asmir Begović. The Stoke City shot-stopper is backing the tournament, which aims to encourage pupils to learn lessons from the genocide. The figure 8372 represents the number of individuals who lost their lives during the atrocity in eastern Bosnia-Herzegovina in July 1995.

Laura Gauvrit, Assistant Headteacher, was recently part of a Remembering Srebrenica delegation to visit Bosnia.  She pledged to share her experiences with staff and students at the school.

“This tournament is the start of a programme of lessons to students in the build up to 11th July day of remembrance,” she explained.  “Assemblies will be delivered and students will discuss how to tackle hatred and intolerance.

The football match is a practical way of standing together in support of victims and survivors and showing we will work towards having a stronger more cohesive society.”

Individual schools are able to tailor the football event to their requirements – deciding who takes part, when the match kicks-off and how long it lasts. Remembering Srebrenica is providing resources for every school.

“In the 20th anniversary year of the Srebrenica genocide what more powerful way is there than football to unite our young people and inspire them to help kick racism, hatred and intolerance out of our society.

We’re delighted that students across the UK have signed up to stand united with us in remembering Srebrenica through football, learning the lessons from the past to create a better and safer future.”

Asmir Begović was himself forced to leave Bosnia as a child during the 1992-1995 conflict. He said:

“The Srebrenica genocide was the worst war crime in Europe since the Second World War. It happened 20 years ago this July in my home country of Bosnia-Herzegovina. I’m proud to support Remembering Srebrenica’s 8-3-7-2 Tournament which brings young people together through football to remember the victims and survivors. It’s a really powerful way to help the next generation to learn about the importance of tackling hatred and intolerance. This will help us to build a stronger society around the world.”

Jun 5, 2015Amil Khan
MAKE A DONATION
Remembering Srebrenica remains committed to honouring the victims and survivors of the genocide.