Some 2,000 invited guests gathered at Westminster Abbey, London to mark the 20th anniversary of the Srebrenica genocide in a high-profile memorial service. 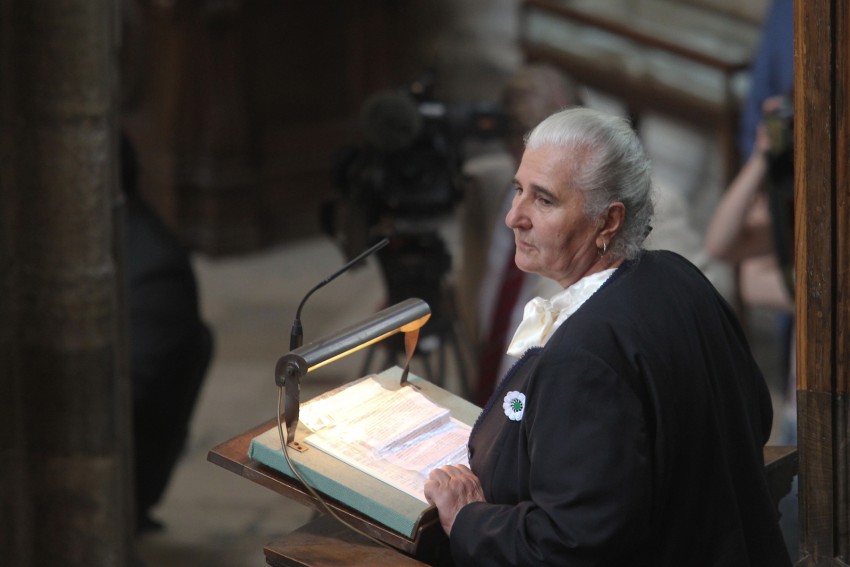 Some 2,000 invited guests gathered at Westminster Abbey, London to mark the 20th anniversary of the Srebrenica genocide a a high-profile memorial service held.

Participants lit 20 candles dedicated to the memory of genocide victims and listened as Munira Subašić, President of the Mothers of Srebrenica association, told her story.

Prime Minister The Rt Hon. David Cameron MP is hosting a Srebrenica Memorial Reception at 10 Downing Street after the service on 6 July. High-profile guests also attended a formal reception in the Houses of Parliament hosted by Speaker of the House The Rt Hon. John Bercow MP.

We must never, ever forget what happened at Srebrenica. The 20th anniversary is a moment to remember the many thousands who lost their lives, to remember their families and the missing, and the fact that for so many – including the Mothers of Srebrenica – the agony continues every day, undimmed by the passage of time. We must reaffirm our determination to act to prevent genocide in the future.”

Her Royal Highness The Princess Royal will represent the UK in Bosnia and Herzegovina at the Srebrenica-Potočari Memorial Complex on 11 July – Srebrenica Memorial Day.

“Although it has been 20 years since this inhuman atrocity, some mothers are still searching for the bones of their children. That is our life now – our biggest problem and our greatest mission. I doubt all of you can understand the pain and suffering we must endure, but I am certain that any mother can.

We still believe in goodness. We believe that truth and justice are on our side. We bear no hatred towards those who executed this inhuman plan, because hatred is weakness and we refuse to be weak.

“I appeal to you to stand by us to protect the most important human values. Stand shoulder to shoulder with us in challenging hatred and intolerance. Together we can create a better, safer, stronger world.”

The Abbey service is followed by a commemorative event on 8 July at the Senedd building, in Cardiff, hosted by Wales First Minister Carwyn Jones AM. Scotland First Minister Nicola Sturgeon MSP will host a memorial service at St Giles’ Cathedral, Edinburgh, on 10 July. And people will gather at City Hall in Belfast to mark the beginning of Srebrenica Memorial Week on 5 July.

Bosnia-Herzegovina Presidency member Bakir Izetbegović told those in the Abbey:

Genocide is one of the worst crimes known to humankind.  Srebrenica happened right here in civilised Europe – a brutal stain on the world’s conscience just 50 years after we said ‘Never again’ to the inhumanity of the Holocaust.

“The best way to ensure that this never happens again is to use the lessons of history to build a cohesive and strong society. We need to honour those who were murdered at Srebrenica, whilst alerting the next generation to the danger of ignoring hatred and intolerance. This is why I commend the work of Remembering Srebrenica in learning the lessons from our past and committing to help create a stronger, safer more cohesive society.”

The service was attended by genocide survivors and Srebrenica mothers who lost husbands, sons, fathers and brothers in the atrocity. The United Nations has described the systematic murder of 8,372 Bosnian Muslim men and boys as ‘the worst crime on European soil since the Second World War’.

Lord Ashdown became the European Union’s High Representative for Bosnia and Herzegovina in 2002, succeeding Wolfgang Petritsch in the position created under the Dayton Agreement of 1995. He is set to tell those in the Abbey:

Nothing can diminish the culpability of those who perpetrated this genocide. But, in condemning this evil, it is also right to acknowledge our passive complicity, as members of the international community for what happened.

“Whether through error, misjudgement, an inability to comprehend, or just inattention, we stood aside when we should not have done. We should therefore remember Srebrenica, not just to bear witness to those who suffered, but also as a warning to us all of what happens when we turn our back.”

Srebrenica Memorial Week leads up to the official Memorial Day on 11 July and will include a range of some 100 regional events across the UK. From Bradford to Birmingham, Surrey to Stoke-on-Trent volunteer organisers are holding memorial events, poetry readings, exhibitions and more.

On the 11 July we commemorate the men and boys systematically murdered in the small town in eastern Bosnia-Herzegovina in July 1995, during the Balkans conflict of 1992 – 1995.

Today’s memorial service is about honouring the victims and learning the lessons from the past to help illuminate the future by involving people of all faiths and non to help build a better, safer and cohesive society for all.”

It organises UK memorial events and takes individuals from communities across the UK to Srebrenica to speak to survivors and families whose loved ones were killed. Following their experience, visitors pledge to take action in their communities with projects to help raise awareness in the UK of the genocide and its consequences, whilst helping to strengthen British society against the threats posed by hatred and intolerance.

Jul 7, 2015Amil Khan
MAKE A DONATION
Remembering Srebrenica remains committed to honouring the victims and survivors of the genocide.