Home Primary Information In the Media

Remembering Srebrenica in the news. 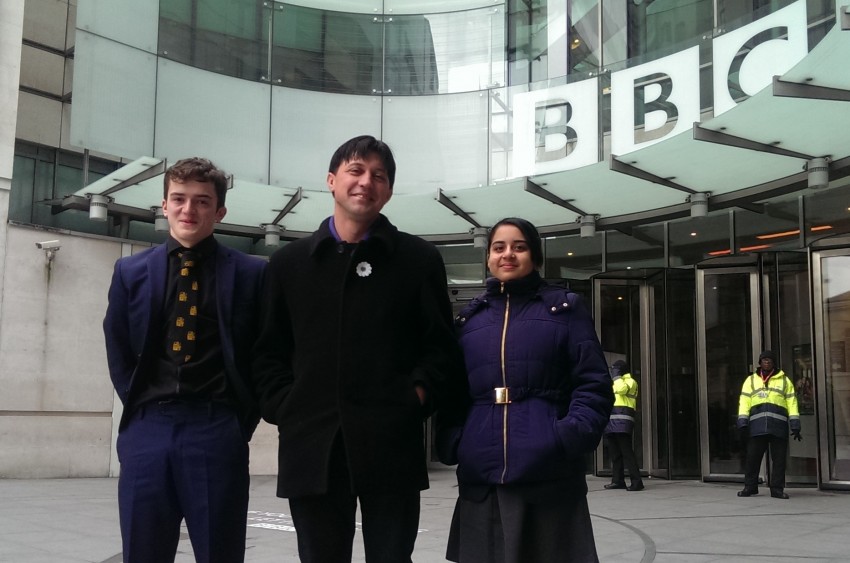 We have collected articles about Remembering Srebrenica which have appeared in print – browse them here.

Survivor of the Bosnian War Speaks at Bournemouth University

Iain Gray: Why We Must Remember Srebrenica

Survivor of Siege of Sarajevo interview

From Teenager to Soldier- The Story Of  Bosnia Survivor

From Kristallnacht to Pittsburgh- Why We Must Continue Confronting Hatred

Siege of Sarajevo Survivor to Speak in Blackburn Schools

“Gone but not Forgotten”, Ilford Man Walks a Marathon to Remember the Victims of Srebrenica

Coverage of the We Are One Upstander Awards

We Will Not Allow Hatred and Intolerance To Go Unchecked

Running to Remember in Northampton

Cultural Quarter of an Hour, September 2018

UK Must Take Lead To Protect The People Of Idlib

We Must Give A Voice To The Victims Of Rape In War.

Wartime Rape In Bosnia: A Daughters Search For Truth

Harrow Councils Honours Victims and Survivors of the Srebrenica Genocide

Interview with Lejla and Sian Damon during Srebrenica Memorial Week

Coverage of UK Commemoration of 23rd Anniversary of the Srebrenica Genocide

Interview with Lejla Damon in the Sarajevo Times

Footballers From Pleckgate High School Remember The Genocide In Srebrenica

Trying To Heal The Scars Left By The War In Bosnia

Sunderland To Join The World in Marking Srebrenica Genocide

Remembering Srebrenica, More Than 20 Years On

Thousands Killed In Srebrenica Massacre To Be Remembered in Memorial Week

Interview with a Lessons from Srebrenica Delegate

Visiting Bosnia and Learning Lessons From Our Past

Football Match In Memory of Those Killed At Srebrenica

Cardiff is Celebrating the Courage of Genocide Survivors

We Will Remember: 23 Years Since The Srebrenica Genocide

Visiting Srebrenica Filled Me Full of Anger and Shame

Remembering a Genocide- A Councillors Plea for Racial Tolerance

Calling On Conservative Councillors to Commemorate the Srebrenica Genocide

Srebrenica Genocide to be remembered at Belfast City Hall

All Women Group Head to Bosnia To Address Gender Violence

School Pupils Will Visit Bosnia As Part of a Leadership Course

From Student to Survivor of the Siege of Sarajevo: Dad Joins police Fight Against Hate Crime

Bosnian War rape survivors speak of their suffering 25 years on

Sunderland service to commemorate one of Europe’s worst genocides

We will not forget them – Srebrenica Memorial Week 2017

William Scholes: Srebrenica can help us learn lessons from our own past

‘We owe it to the people of Srebrenica’

Victims of Srebrenica massacre to be remembered at public event

22 years ago 8,000 Muslim men and boys were killed at Srebrenica in Europe’s worst atrocity since WWII

Why we Continue to Remember Srebrenica

The Srebrenica massacre: 22 years on

Students need to be told of the horrors of genocide

Remembering people who died at Srebrenica 22 years on

Gender and genocide: breaking the silence over the rape of Srebrenica’s women

Prime Minister May on Srebrenica: Pain is still there for so many people in BiH

Remembering the lessons of the Srebrenica massacre

22 years on, the women of Srebrenica: their story must be told

Kezia Dugdale: The scars of genocide will never heal until Serbs end their denial

25 Years since Bosnian Muslims were Marked for Extermination

Learning the lessons from Srebrenica

Warning for NI in stalling of Bosnia’s progress

Are there lessons for Northern Ireland in Bosnia?

22 years after the extermination of 8,000 Muslims in Srebrenica, Bosnian Serbs deny genocide

What lessons can Northern Ireland learn from other societies recovering from conflict?

Teenager who survived firing squad has a lesson for Wales

Bosnia: Rape as a Weapon of War

Nedzad Avdic: young Britons will speak about the genocide in Srebrenica

Diggers, denial and despair: The macabre story of the Srebrenica cover-up

Remembering the past to help change the future

Remembering the genocide in Bosnia and beyond

Recognition for project working with Keighley schools to tackle intolerance

Sturgeon joins other party leaders to back education on genocide

The warnings Bosnian gravestones carry for us in 2016

Glasgow Stands Up Against Hate Crime

Nicola Sturgeon: We must keep the memory of genocide alive

Nicola Sturgeon ‘moved’ by visit to site of 1995 Srebrenica massacre

21 Years After The Srebrenica Massacre, A Call For Better Understanding Of Different Cultures

Remembering Srebrenica, a cautionary lesson for Luton and the world.

Memorial Day has a timely message

Srebrenica massacre ‘a terrible reminder of where hatred can lead’

South Tyneside will mark 21st anniversary of genocide in the Balkans

Srebrenica could be repeated if we don’t take lessons

Remembering Srebrenica memorial shows why we must unite against hate

Learning lessons from the Srebrenica genocide

Remembering the victims of genocide in Bosnia and Herzegovina

Communities come together to unite against hatred

Pendle MP remembers the victims of genocide in Srebrenica

Victims of Srebrenica remembered in Stoke-On-Trent

Memorial for the Genocide in Srebrenica opened in England

Borehamwood group marks the 21st anniversary of massacre of 8,000 in Srebrenica

Should crimes against women in Gloucester be classed as hate crimes? Talk to be held at Guildhall

Lessons on tolerance from the worst atrocity since World War ll

After a week of remembrance…

Remembering Srebrenica: Lessons learnt and why it needs kept in our memory

The Forum for Cities in Transition (blog), July 2016

‘Unite against hatred for our future generations’

A series of posts for Srebrenica Memorial week:

Rabbis and Imams’ historic and symbolic visit to Srebrenica

Survivor talks to students about genocide

Remembering Srebrenica: ‘Our young people can challenge hatred of all kind’

Young Highlanders urged to ‘stand up to hatred’ as genocide remembered

Lancashire councillor steps out for Srebrenica

Why We Need To Remember Srebrenica
Huffington Post, December 2014

Meeting the Survivors of Genocide
Bradford Telegraph and Argus, November 2014

Slow Recovery: Perspectives on from the Bosnian War Aftermath
One Europe, September 2014

How Lutonians helped heal the heart of this Bosnian refugee
Luton Today, July 2014

Why we must all learn lesson’s from the dark days of Srebrenica
stv Edinburgh, July 2014

Communities ministers mark the anniversary of the Srebrenica genocide
Department of Communities and Local Government, July 2014

Lessons for Scotland from horrors of Srebrenica
Herald Scotland, July 2014

Brooks Newmark, MP for Braintree, on Remembering Srebrenica and the important work of the ICMP
Conservative Party Blog, July 2013

The Prime Minister’s statement on the 18th anniversary of the Srebrenica genocide
www.gov.uk, July 2013

“We thought we would be safe.” Hasan Hasanović on surviving the Srebrenica genocide
BBC, July 2013

Anniversary of the Srebrenica genocide
The Catholic Church in England and Wales, July 2013

Angus Robertson: “Lest we forget, Bosnia’s agonies aren’t over”
The Scotsman, July 2013