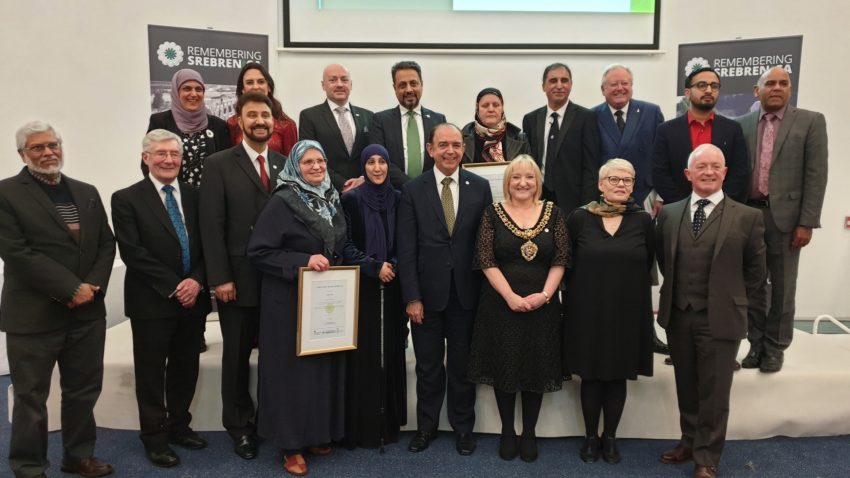 The Minister for Faith, Lord Bourne of Aberystwyth joined local dignitaries to present Community Champions from the North West with an award in recognition of their outstanding work to tackle hatred and unite people in their communities through organising events to commemorate the Srebrenica genocide.

The dinner took place at the British Muslim Heritage Centre in Manchester and was attended by senior figures including Shadow Minister, Afzal Khan MP and the Shadow Secretary of State for Northern Ireland and former Police and Crime Commissioner for Greater Manchester, Tony Lloyd MP. Other guests included the Lord Mayor of Manchester Cllr June Hitchen and the Vice Lord-Lieutenant of Greater Manchester, Paul Griffiths.

From events held in prisons, NHS trusts and police forces across the North West, commemorations were celebrated for generating new ways of bringing communities from different backgrounds together and engaging people in learning the lessons of Srebrenica. An overwhelming number of people participated in the voting process with votes cast online for nominees in five categories that ranged from Best New Initiative to Best Engagement from an Organisation. In addition, Continued Dedication Awards were awarded in acknowledgment of the enormous contribution made by Aisha Mirza, Umer Khan and Dudia Zilic as well as a special Chairman’s Award that was presented to Steve Baker by Lord Bourne for his tireless efforts and dedication to raising awareness and educating others about Srebrenica over a number of years.

“These awards highlight the powerful impact of Community Champions in the North West. Their dedication to building bridges and confronting hate within UK communities is truly admirable and humbling. I want to pay a particular tribute to the North West Board Chair, Elinor Chohan and all of her board members for inspiring our Community Champions to commemorate Srebrenica and help create stronger, safer communities”

The full list of the winners was as follows:

As part of the regional Hate Crime Awareness Week, John Sacker and his team at Merseyside Police organised for a survivor from Bosnia to speak about his experiences and how communities in Merseyside can work side by side to combat hate crime. Resad Trbonja, a survivor of the Siege of Sarajevo spoke to 250 people at the launch of the week followed by a week-long series of events with different police forces across the North West in order to celebrate and promote the region’s inclusivity and rich diversity. 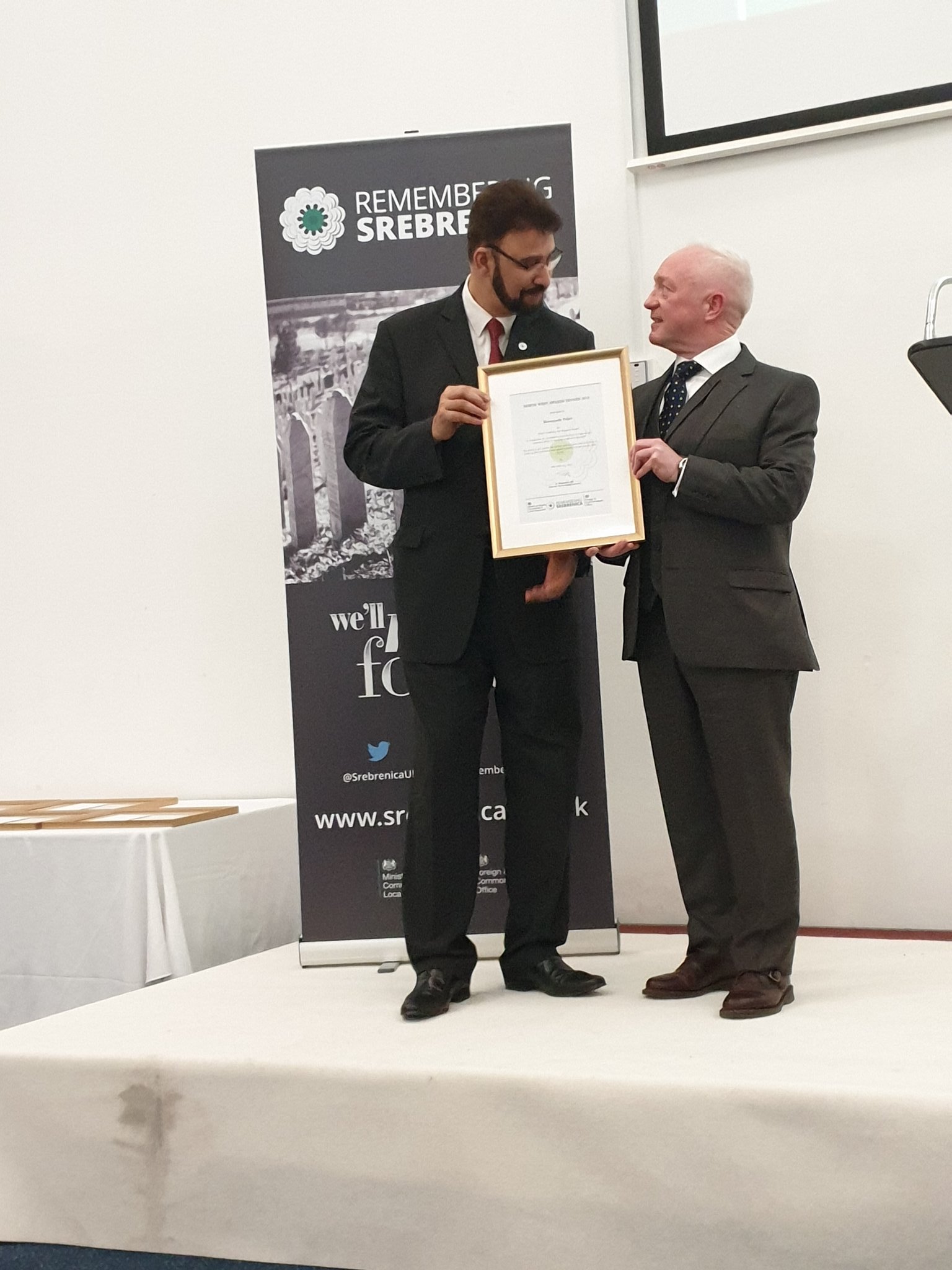 Remembering Srebrenica, supported by Community Champion Cllr Noordad Aziz and Ismail Hasham, ran a highly successful educational tour, giving students at 13 schools in the North of England the opportunity to hear the testimony of a survivor and gain an understanding of the lessons that can be learned from the genocide. Over the course of one week, over 1500 students in Lancashire and Kirklees heard from a survivor who shared vital lessons that are relevant to the UK today. A public event was held at the University of Sheffield which was attended by over 80 students. The feedback received from teachers and students was overwhelmingly positive and the schools intend to remain involved with Remembering Srebrenica going forward. 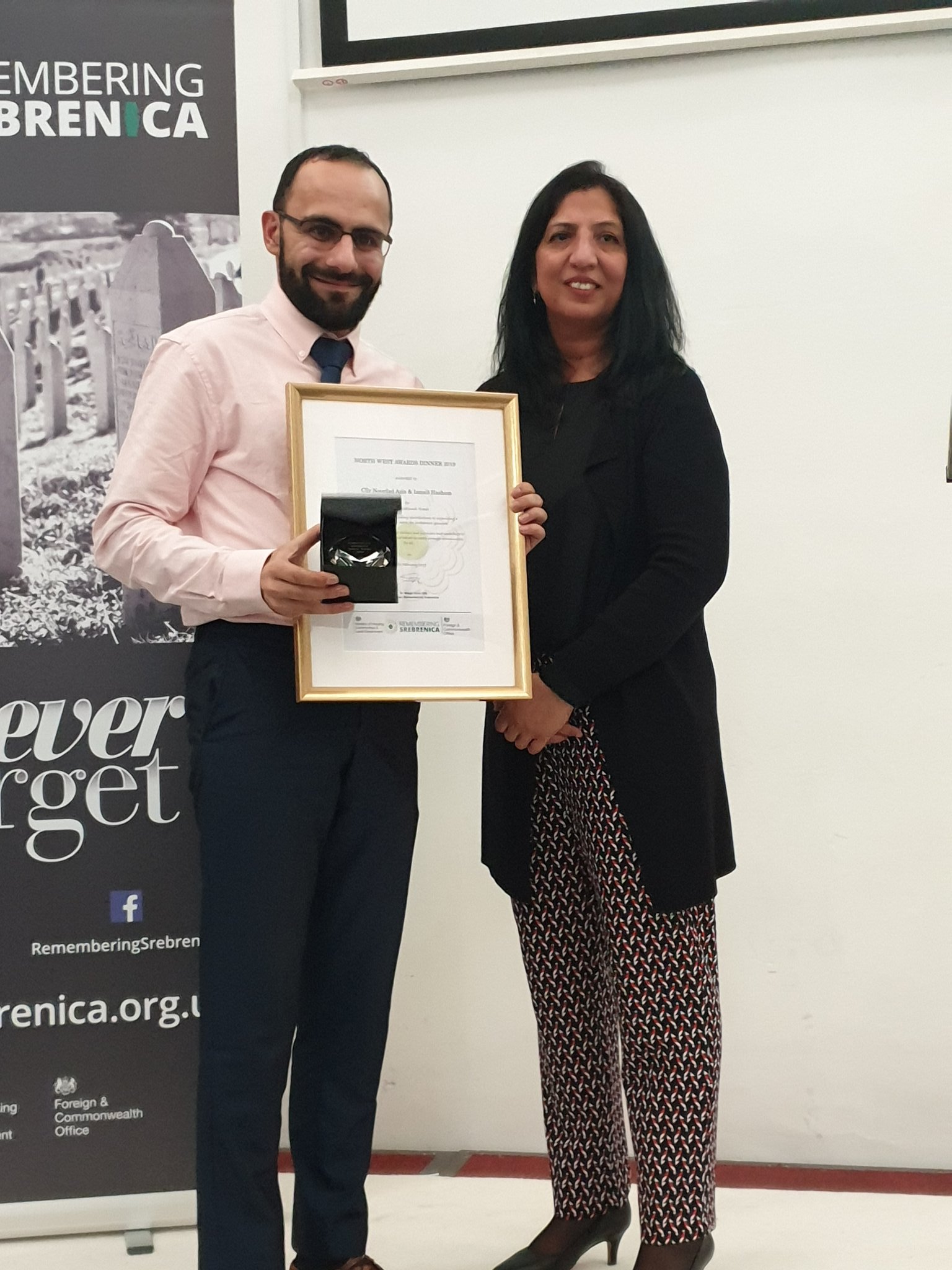 Sadia Muminovic and the Bosnian community in the North West organised an Iftar for Srebrenica to bring together the local community and Bosnian refugees to get to know each other over food at Didsbury Mosque. Sadly, the event had to have a heavy police presence due to intimidation and threats from far-right extremists outside of the mosque. Despite this, the event still went ahead thanks to the support from Greater Manchester Police. 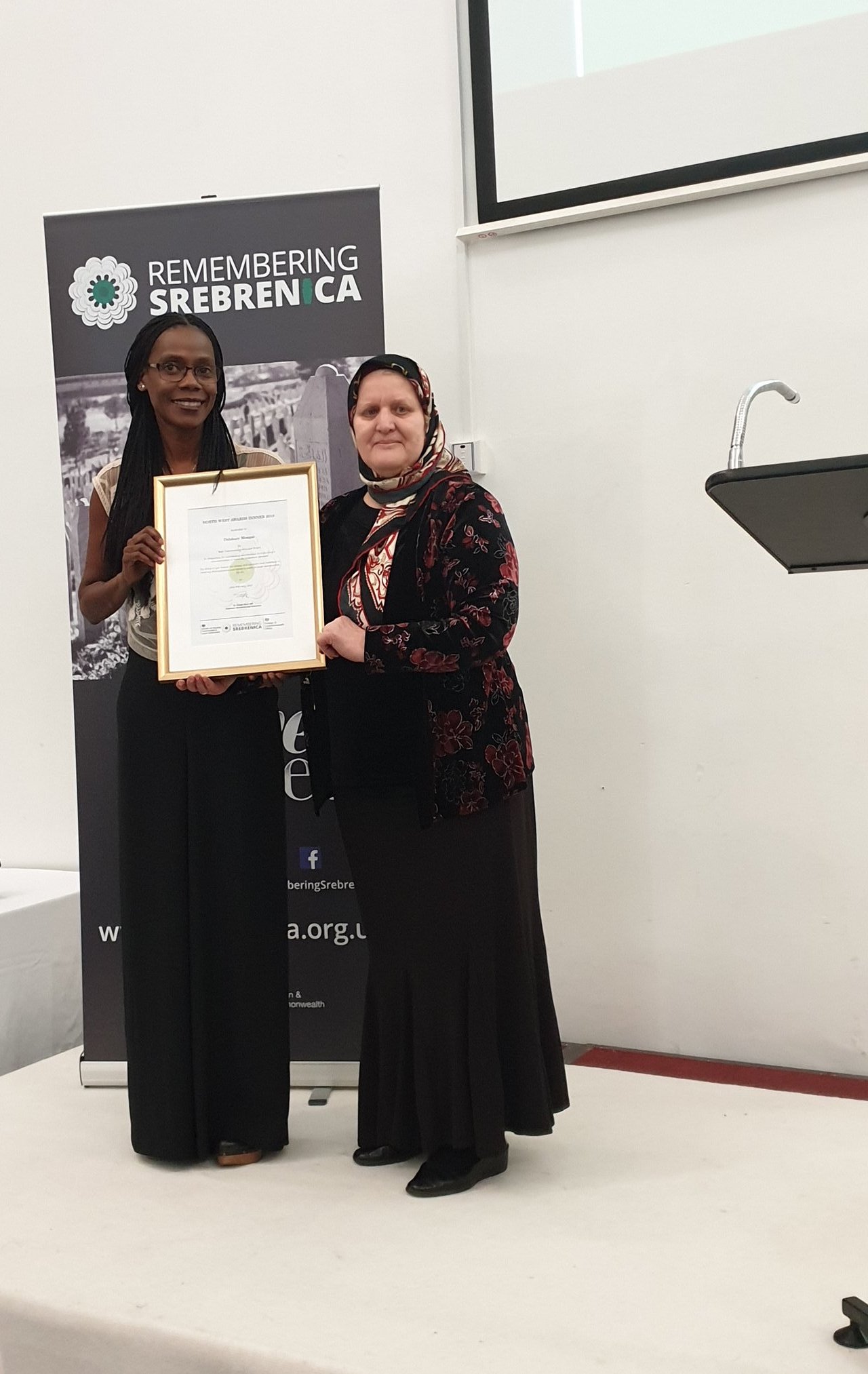 Award for Best Engagement from an Organisation: Manchester Rape Crisis

During Srebrenica Memorial Week 2018, survivors of sexual violence from Rape Crisis Centres wrote cards to Bosnian women survivors, in an act of woman-to-woman solidarity, as part of a collaborative project between Rape Crisis England & Wales and Remembering Srebrenica. These cards were then received by women from the Association of Women War Survivors and Strength of Women, organisations both based in Bosnia. The campaign was a brilliant display of solidarity between women working against sexual violence in Bosnia and the UK. 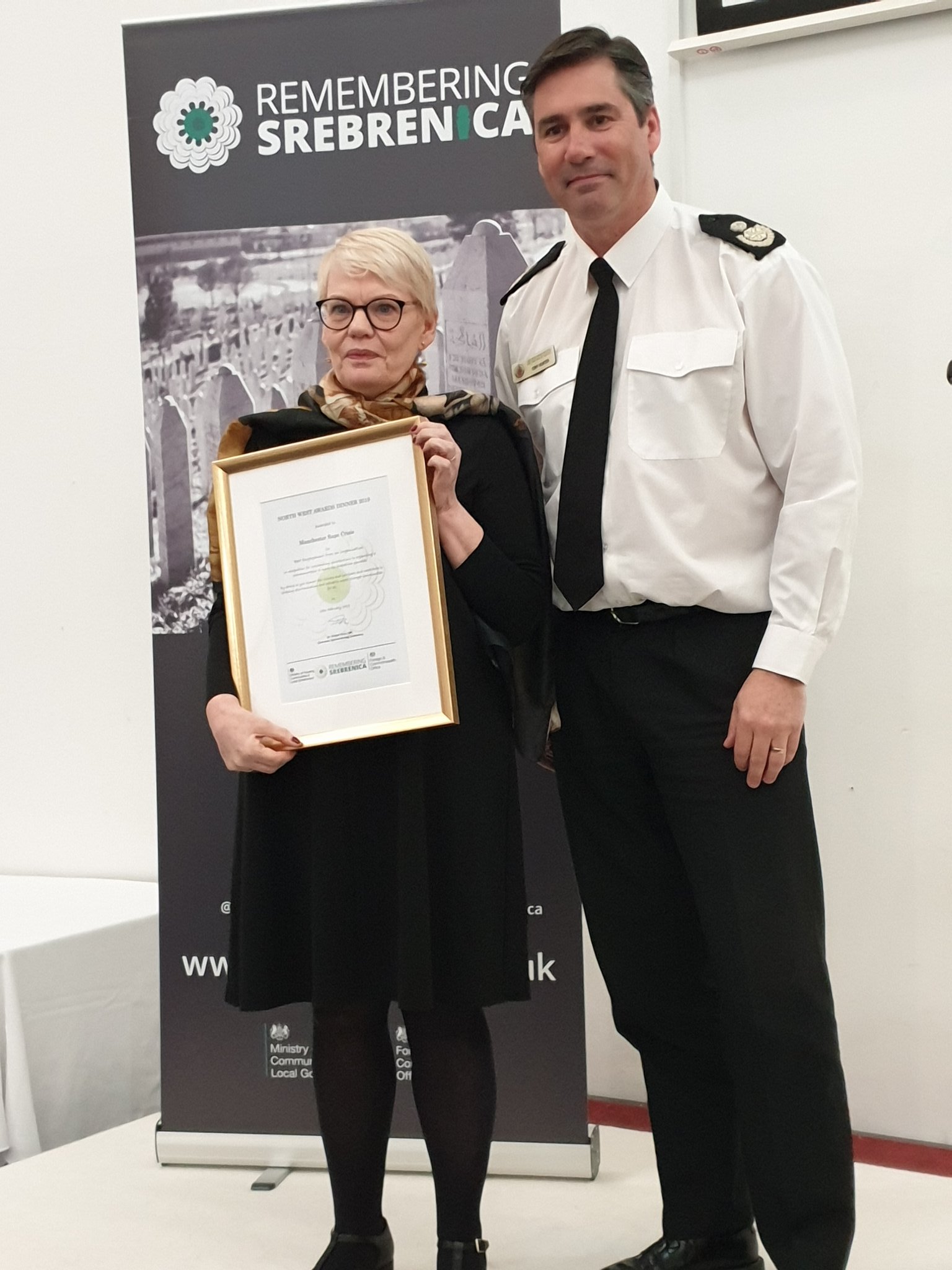 Steve Baker, Executive Headteacher of The Aspire Schools Federation has created a project called ‘Never Again’, which campaigns to fight against hate crime and to create a better and safer society. Through collecting messages of wisdom and opposition to hate speech from inspirational role models, the project aims to create a book to inspire the younger generation and the wider community. This brand new project has already received messages of support from world leaders such as Angela Merkel, Justin Trudeau and Scilla Elworthy. 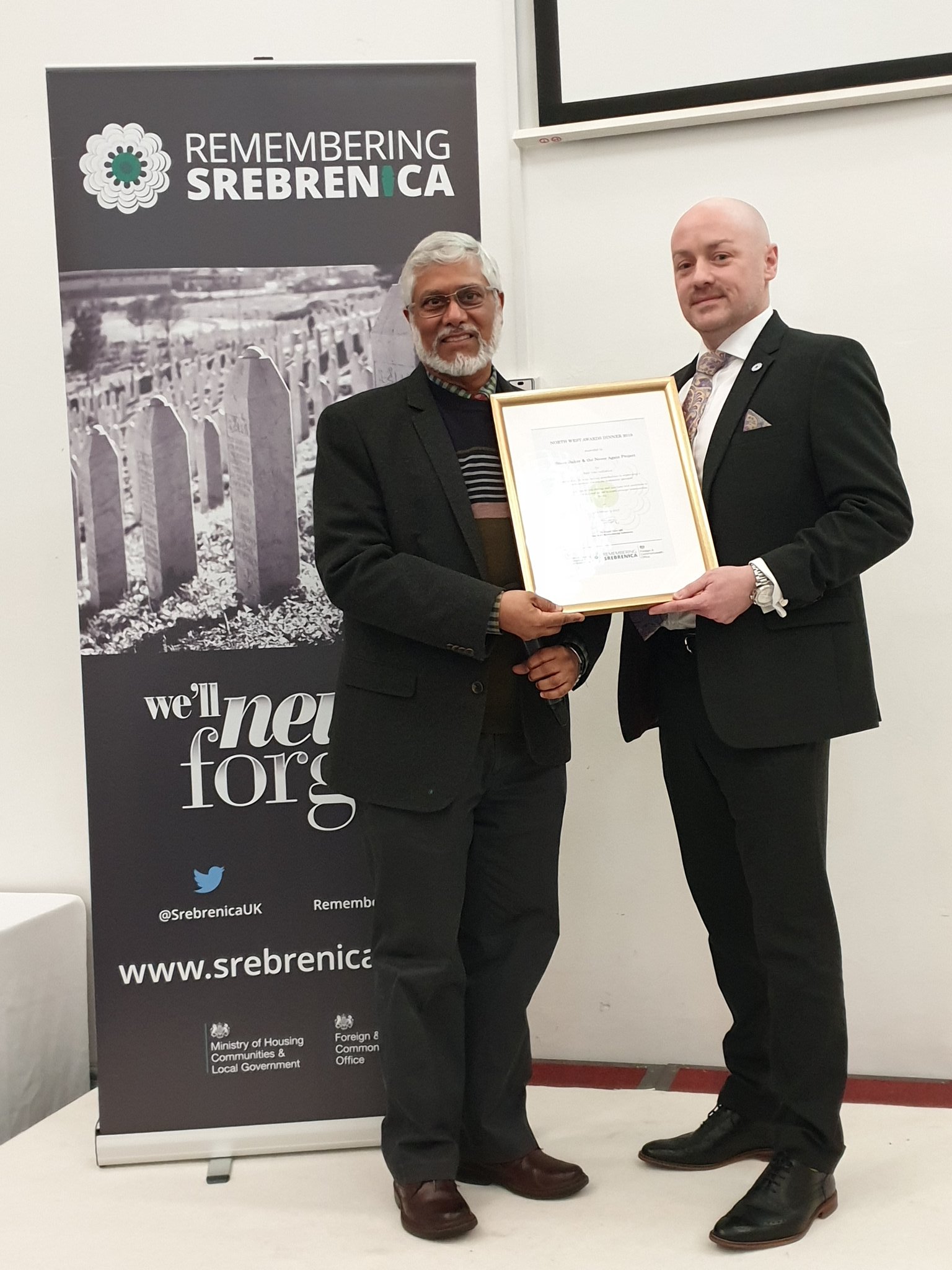 Dudia arrived in the UK as a refugee who escaped from the town of Olovo some 50 kilometres from Sarajevo when Serb forces swept through her homeland. She spent four days in the back of a truck with her two young children, Leyla, then three, and Aldin, aged seven, eventually arriving in the Zagreb in neighbouring Croatia. She was then transported to the UK where she set up a new home in Northern Moor. Dudia has supported Remembering Srebrenica through attending countless events to tell her story and share her experiences so that others can learn of the consequences of hate. She has been steadfast in her determination to play her part to ensure that the lessons of Srebrenica are learnt so that such an atrocity can not be allowed to happen again. 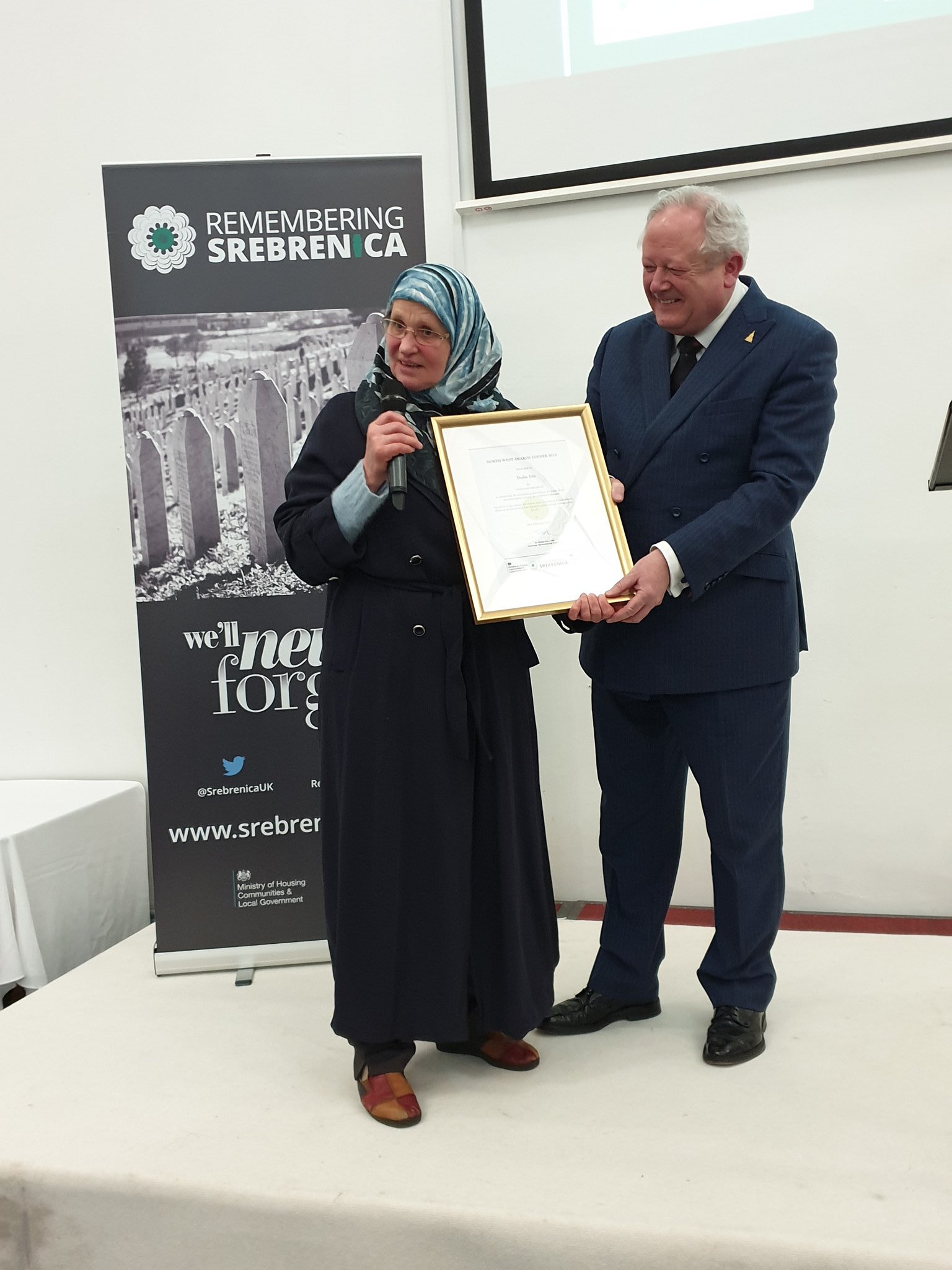 Aisha has devoted so much of her time over a number of years working to raise awareness on human rights issues, standing up against injustice and tackling hatred and intolerance. This has included working with survivors of sexual violence which has been an integral part of her continued work in tackling sexual violence against women and girls. 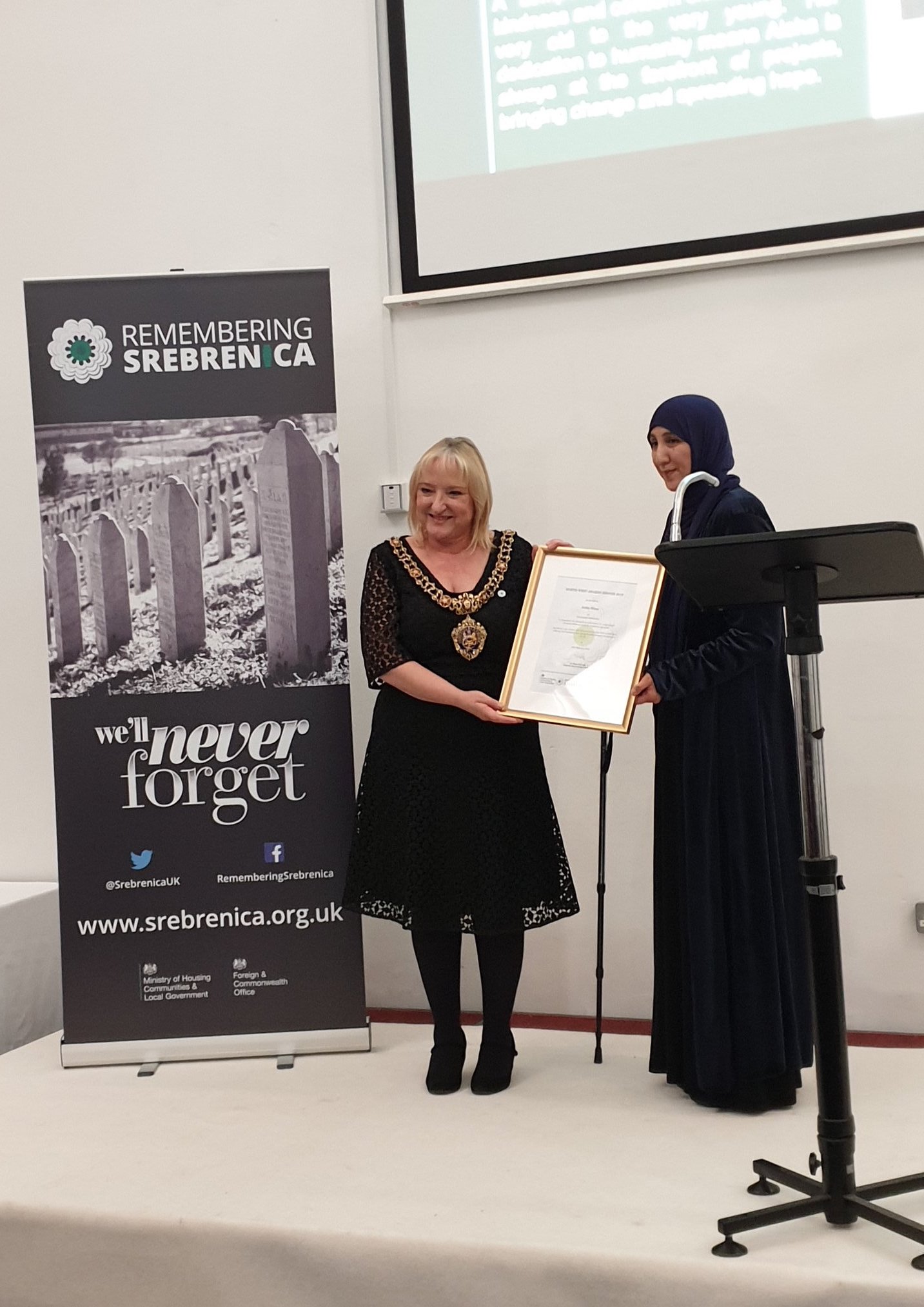 Umer, a superintendent with Greater Manchester Police has made a huge contribution to strengthening community cohesion, helping bring people together in many different ways. His passion for uniting communities has also seen him lead the national #WeStandTogether initiative since it was launched in 2015, a campaign that has since been adopted as the UK’s response to countering hate, extremism and terrorism. 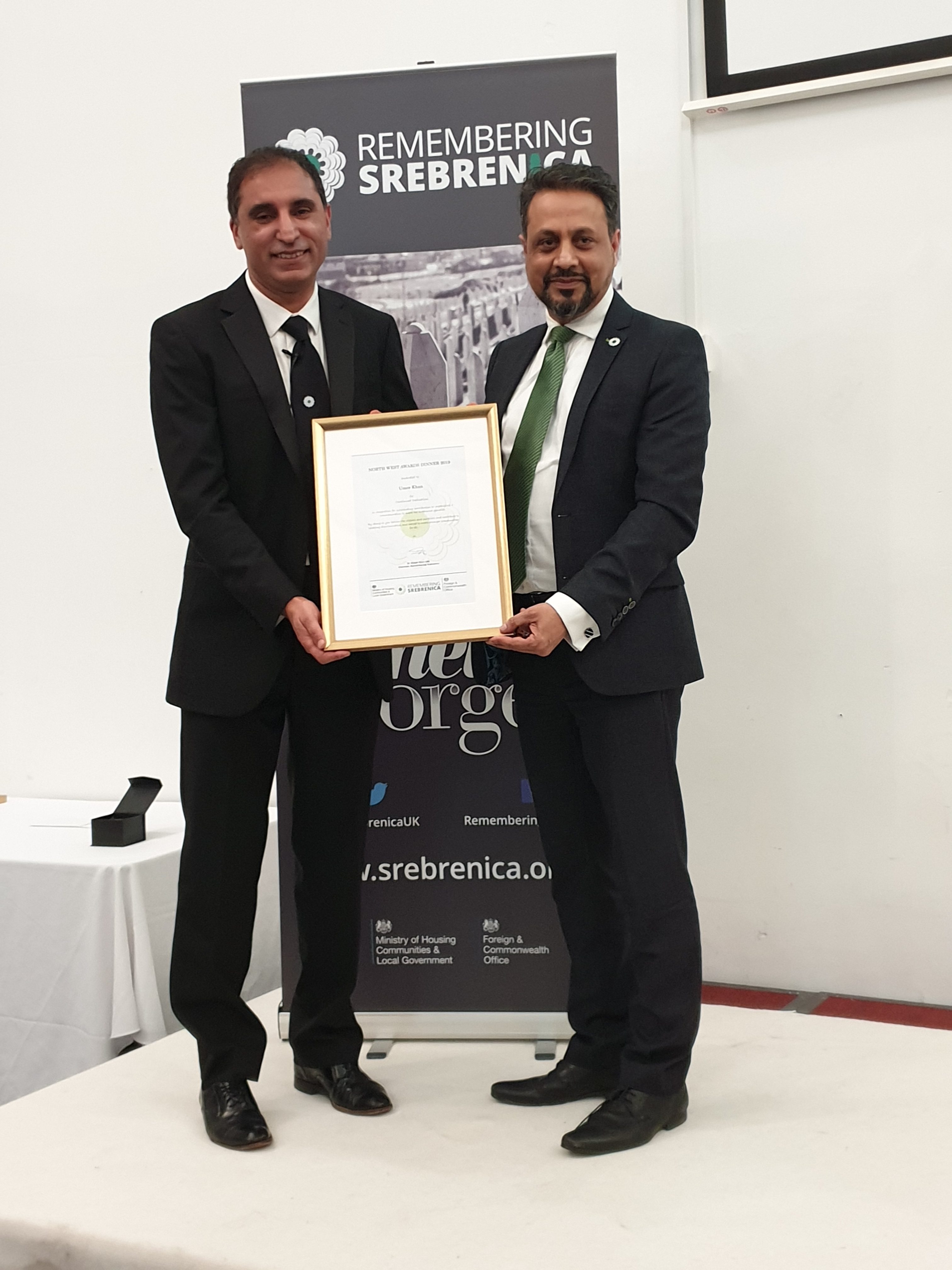 Steve has demonstrated an exceptional level of commitment and dedication to supporting our work and raising awareness of the genocide. His passion for the cause stems from his time working with the International Criminal Tribunal for the Former Yugoslavia in Bosnia-Herzegovina, when he helped to identify the victims of the genocide. He secured the first ever prison commemoration in 2016 and has a strong track record of educating people of the consequences of hatred, integrating the lessons of Srebrenica into much of his work. Steve has proven to be an invaluable supporter of the charity, regularly speaking and presenting on our behalf to members of different communities, faiths, and educational institutions, including speaking at Holocaust Memorial events. 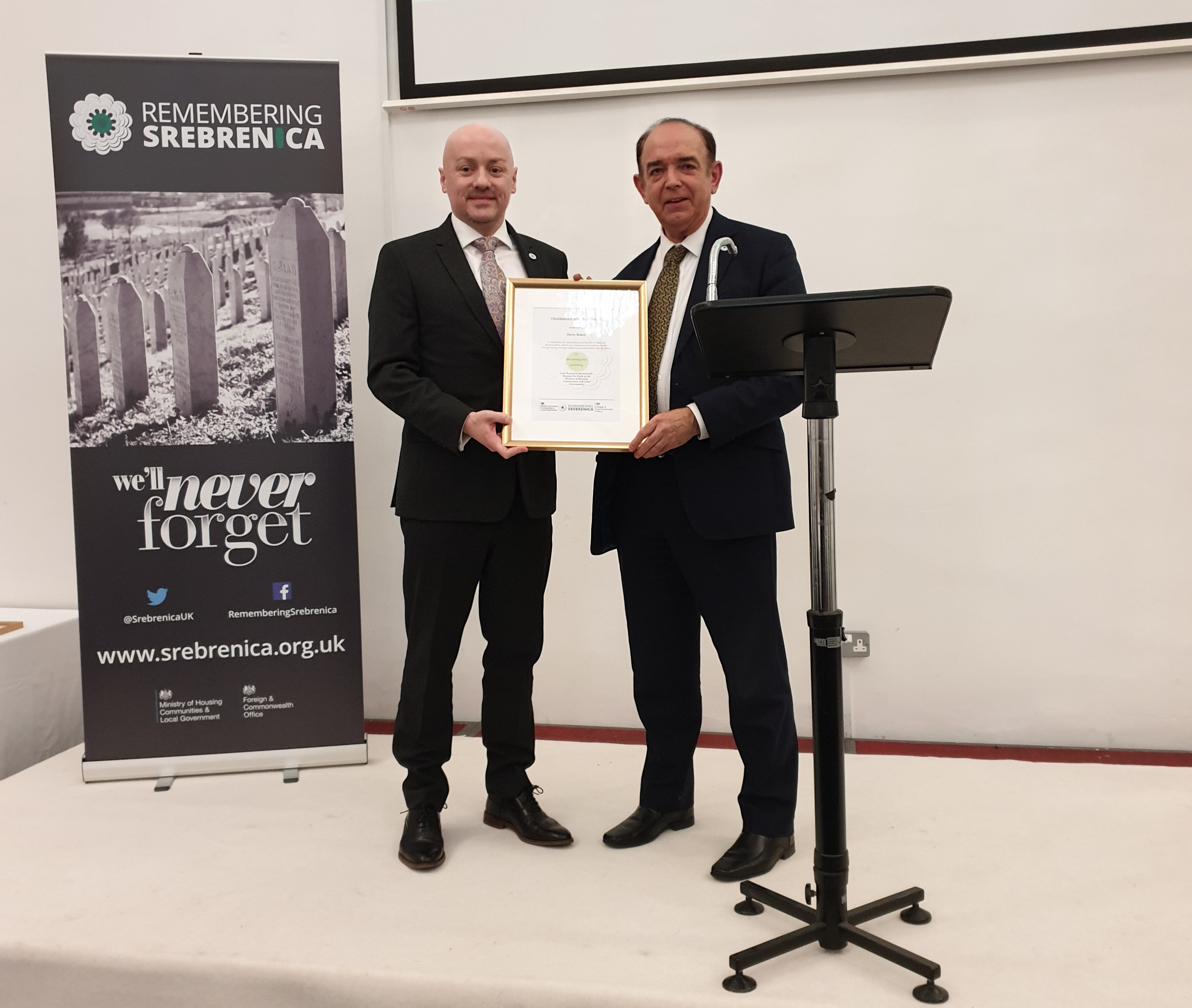 Remembering Srebrenica is grateful to all those who helped make Memorial Week 2018 in the North West such a great success. None of this would have been possible without the dedication and commitment of our Community Champions.

Mar 4, 2019Amil Khan
MAKE A DONATION
Remembering Srebrenica remains committed to honouring the victims and survivors of the genocide.