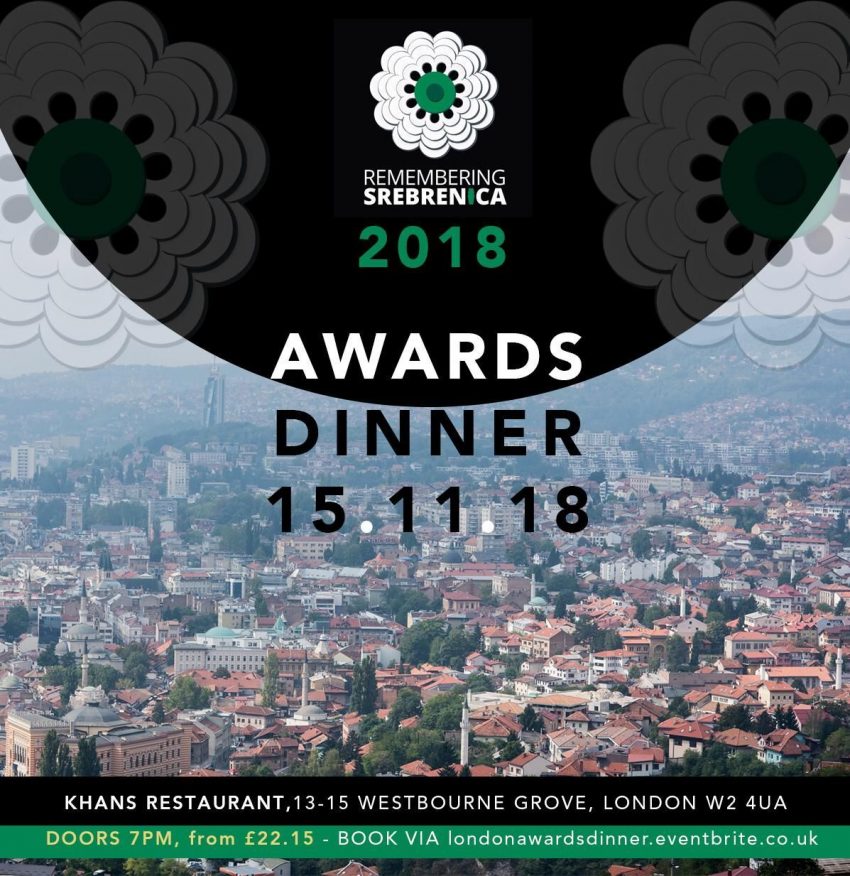 Local politicians, faith leaders, educators and activists gathered in London for an awards ceremony earlier this month to celebrate the contributions of individuals from across the capital who are bringing communities together to help tackle hatred and intolerance.

The event was organised by Remembering Srebrenica’s London and South East Board and aimed to bring together our volunteers to celebrate their significant achievements in fighting back against the racism and bigotry that has sadly become more widespread in the capital this year and to remember the victims of the 1995 Srebrenica genocide.

The awards ceremony had six categories and the winners were as follows: 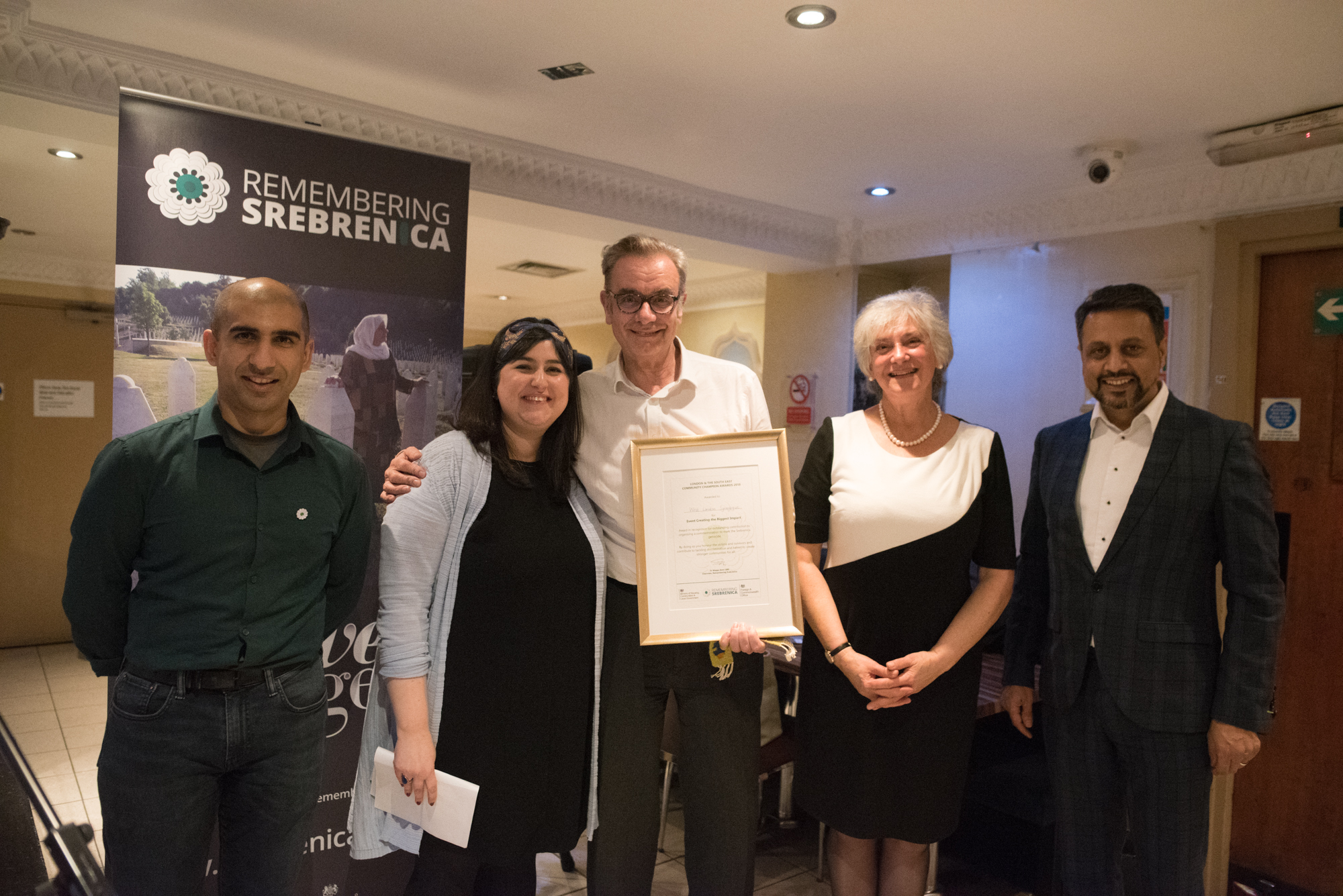 West London Synagogue planned events every day throughout the memorial week to commemorate Srebrenica this July. These events included film screenings, hosting a Bosnian survivor to speak at their Shabbat service, and an exhibition about the Srebrenica genocide. The synagogue successfully reached many of its congregants but also opened its doors and invited members of the public to attend, for many of whom, it was their first time to visit a synagogue. 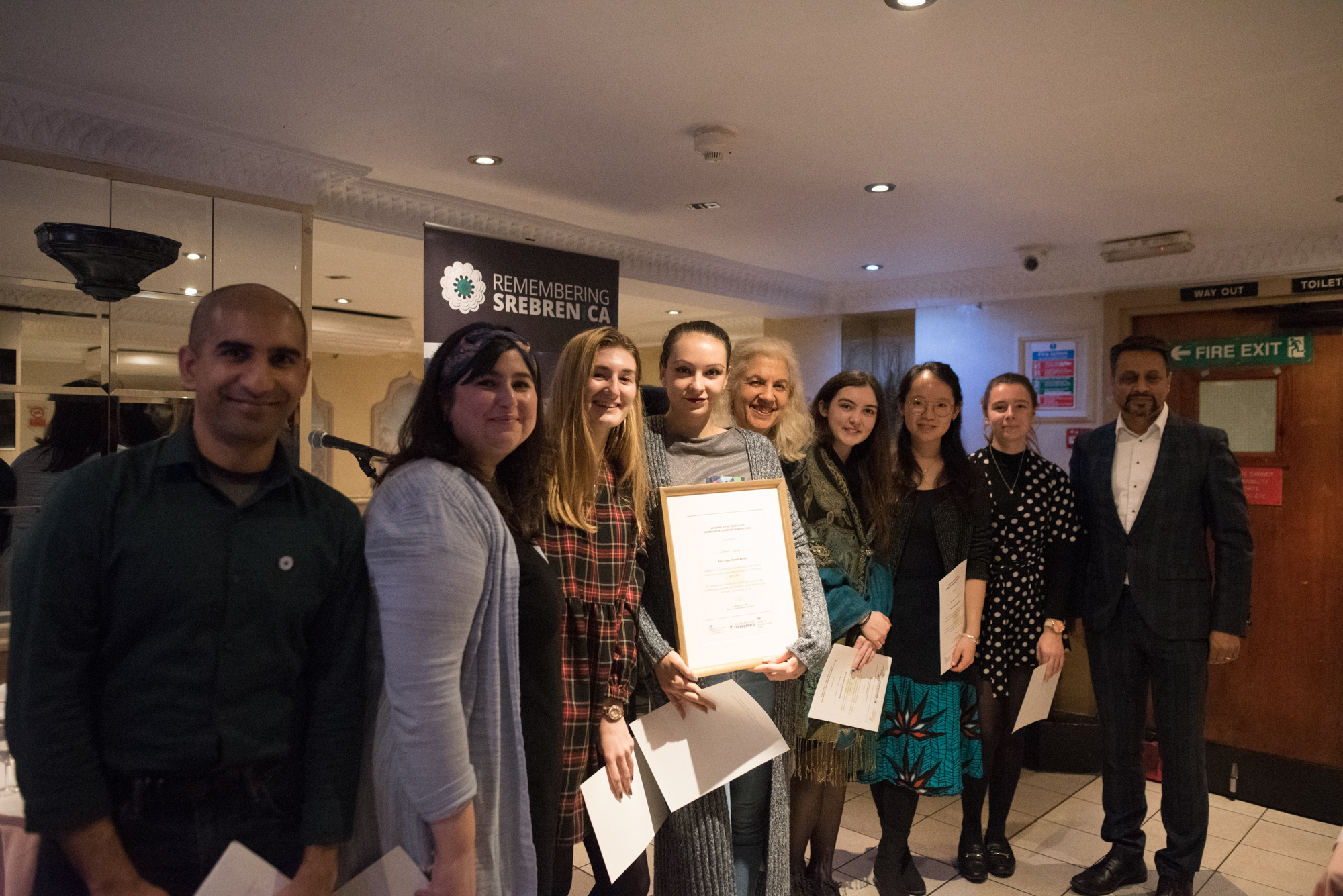 Based in the Drama Department at Queen Mary University of London, People’s Palace Project won the award for Best Education Event in recognition for their work with students from the University to raise awareness of the Srebrenica genocide. The Project works with young people to use the Ten Stages of Genocide as the framework for developing theatre events. The first performance was performed as part of Srebrenica Memorial Week and aims to educate people about the stages of genocide and highlight some of the problems faced by communities and use theatre to imagine solutions. 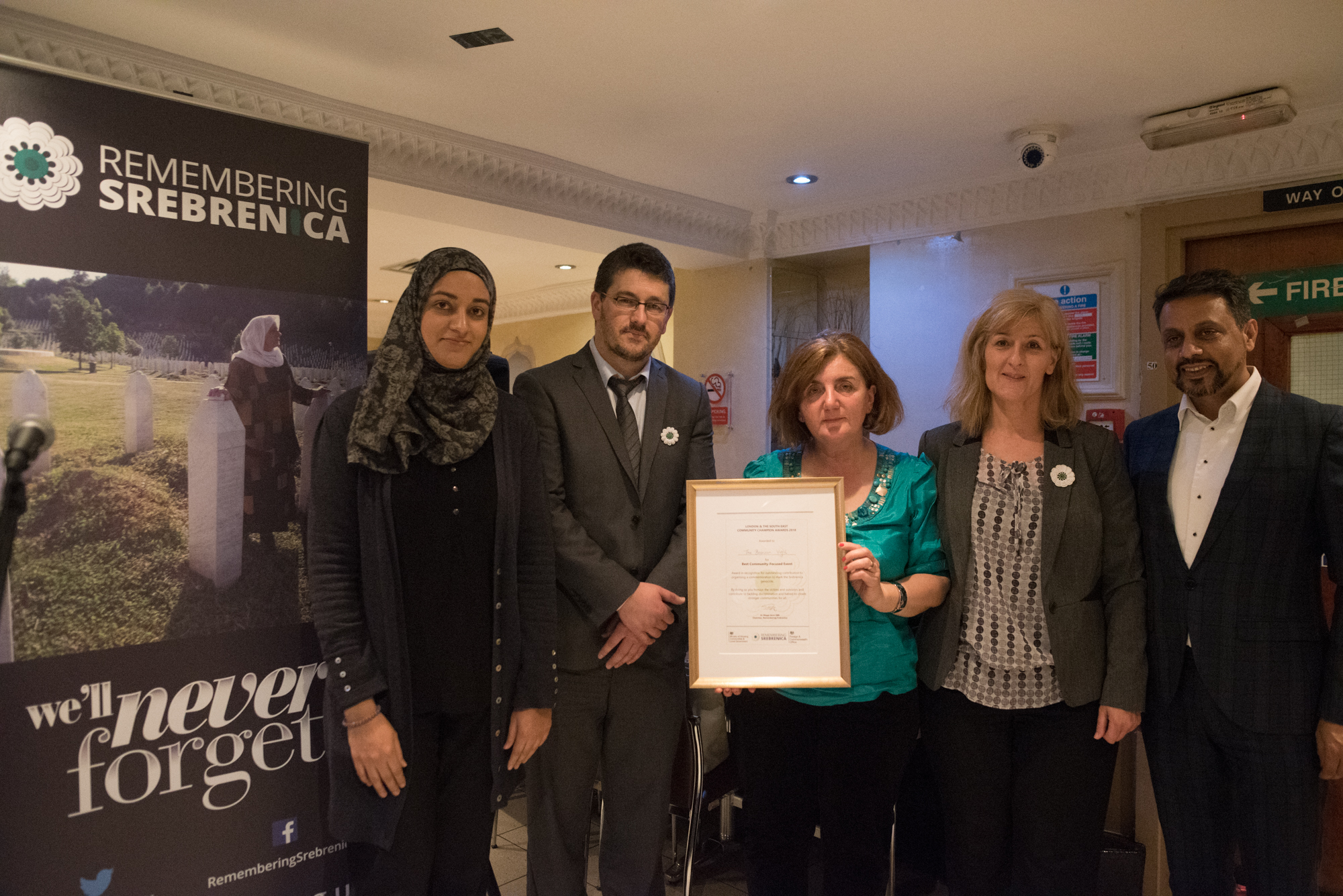 Once again, Bosnian and British communities in London collaborated through Remembering Srebrenica to hold a Vigil in which the names of those killed in the genocide were read aloud. The event also included musical contributions from Bosnian children, survivor testimony, a presentation, poetry, and speeches. The space brought together the Bosnian community in London as well as members of the public and Community Champions, in which conversation and Bosnian food could be shared. 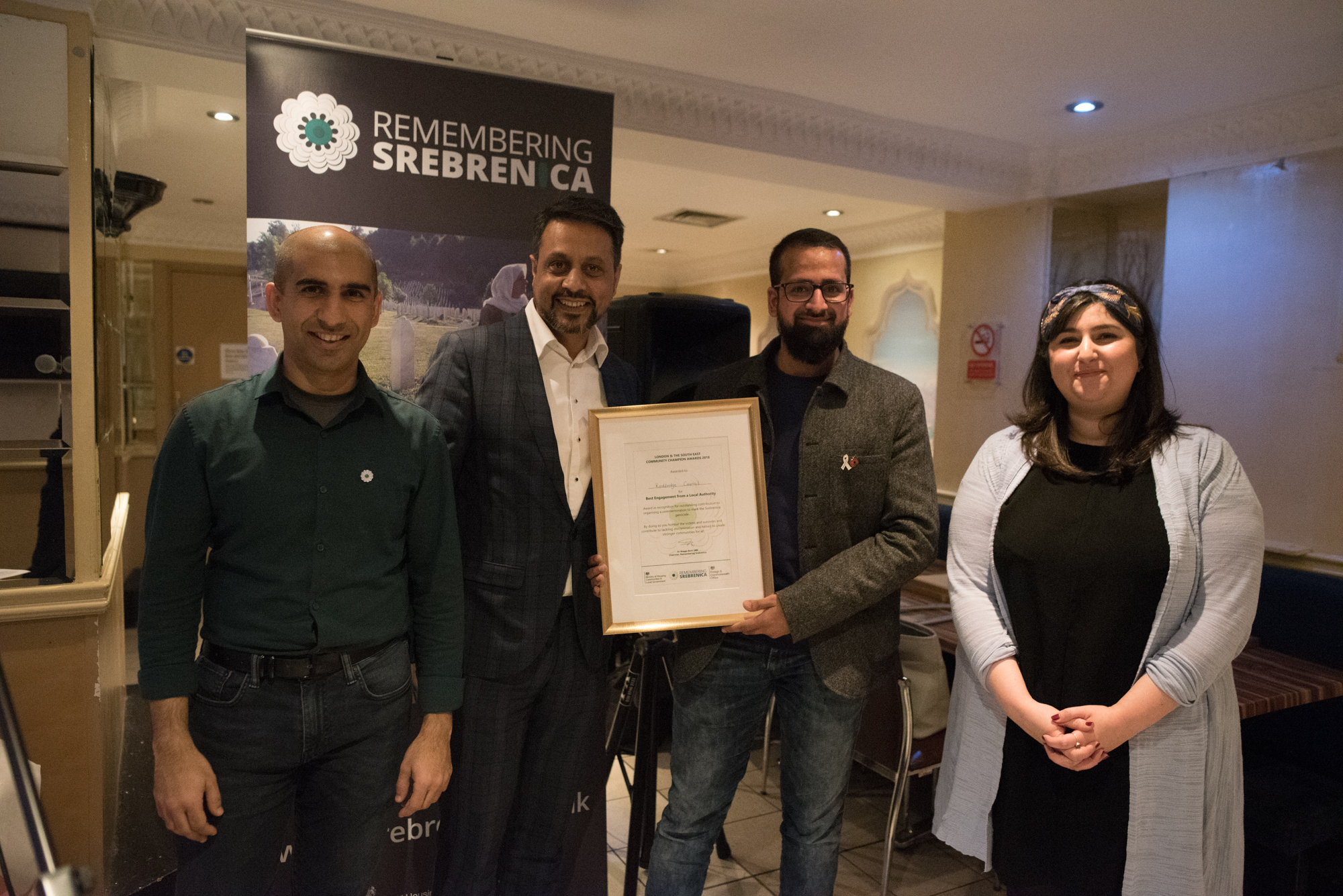 The award for ‘Best Engagement from a Local Authority’ was won by Redbridge Council. The Council commemorated for the first time this year with an event which brought together over 120 people in order to unite communities and challenge hatred. The Council also launched their Hate Crime Pledge at the event which outlined Redbridge’s commitment to challenging all forms of hate. 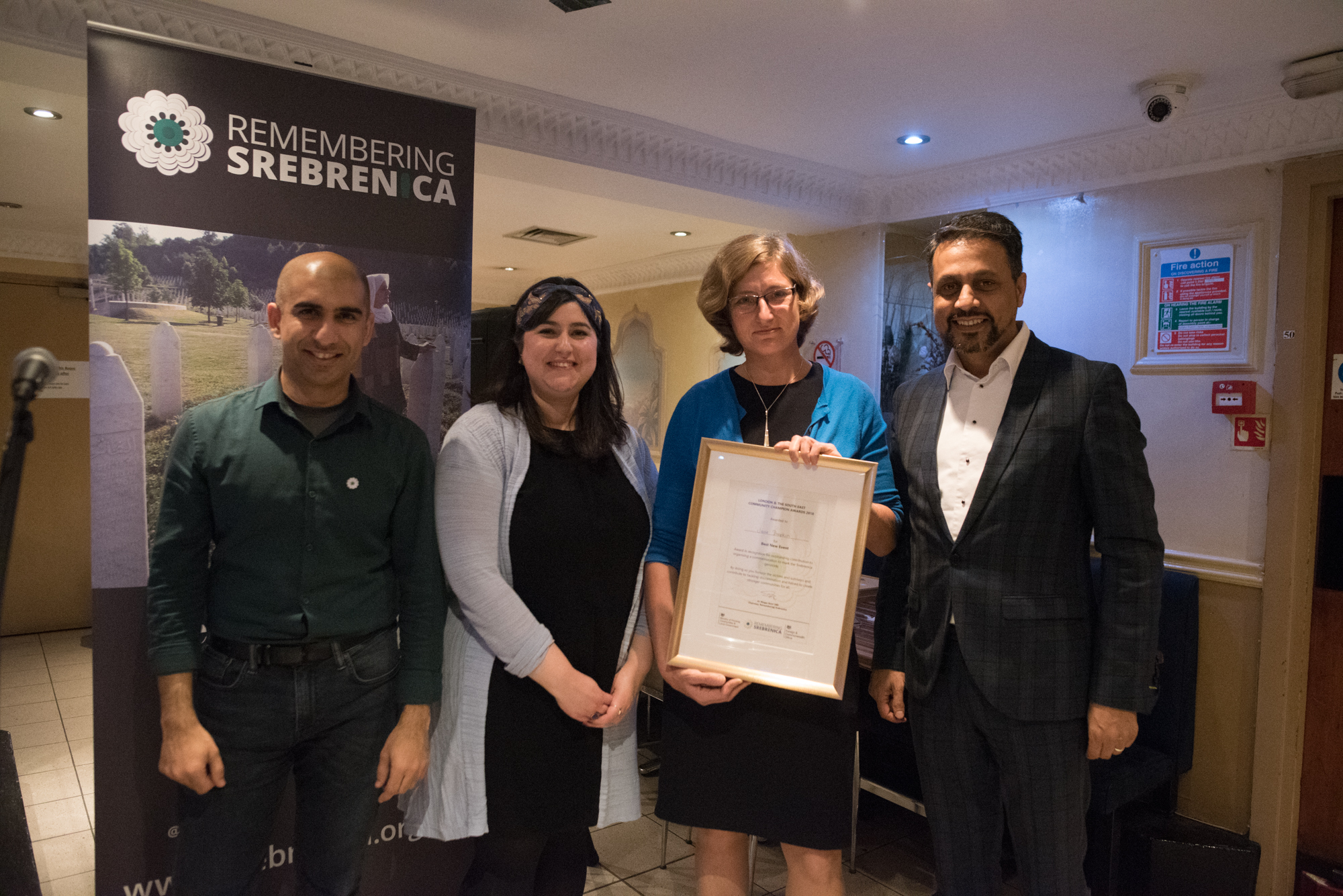 The award for ‘Best New Event’ was won by Jane Drapkin for organising an event at her Synagogue in Northwood. Jane travelled to the site of the Srebrenica genocide earlier this year, and following her visit, organised her first event for Srebrenica this year. Jane delivered a sermon at Northwood and Pinner Liberal synagogue which was themed around tolerance and understanding. Kaddish prayers were said for the victims of genocide and the service ended with the Rabbi and the Cantor saying final prayers to remember the victims from Srebrenica. 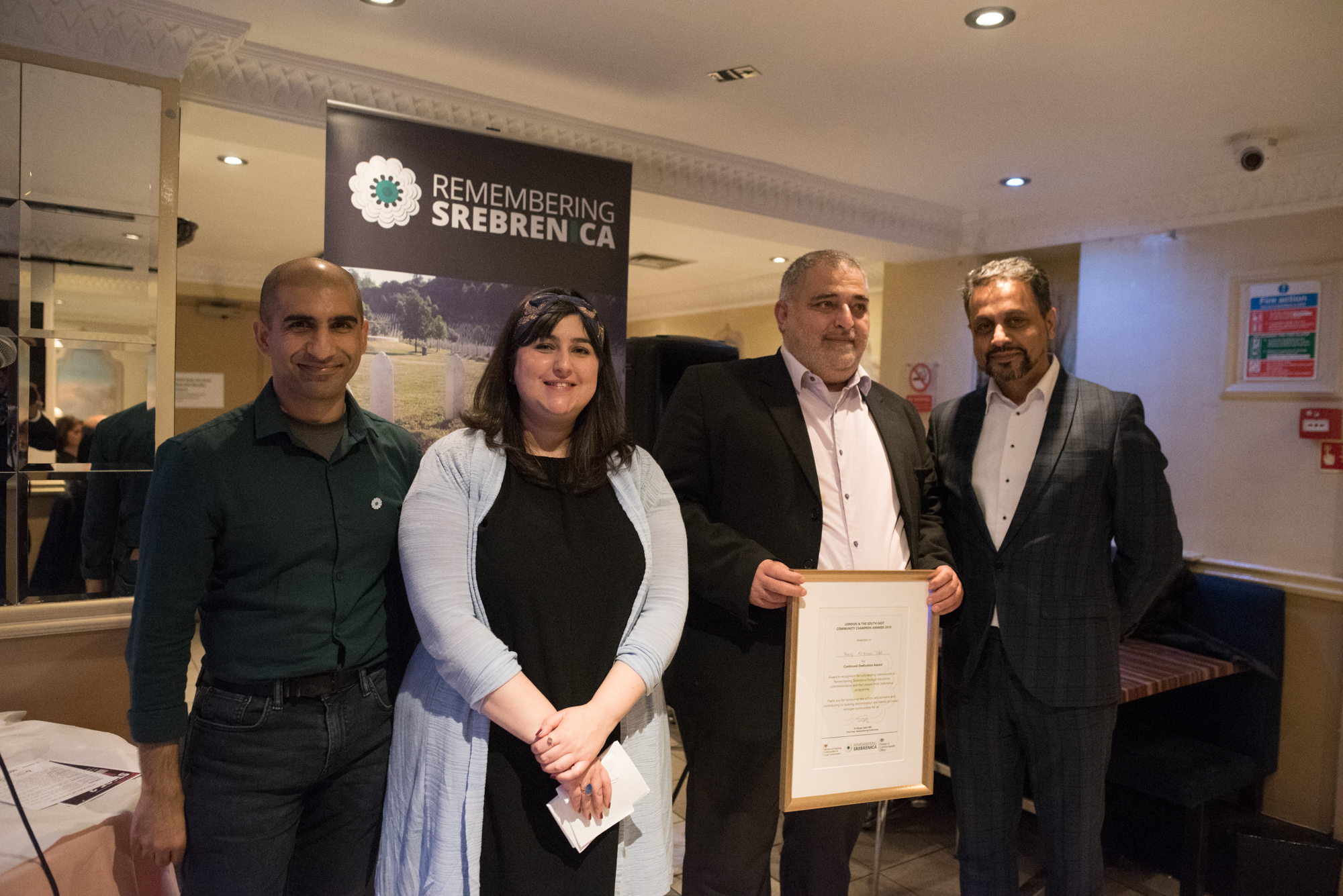 The Al-Khoei Foundation are one of the most respected organisations in the UK and launched Srebrenica Memorial Week with HRH Prince Hassan of Jordan and leaders from all faiths and none. The Al-Khoei Foundation has been commemorating Srebrenica every year since the founding of the charity and has been at the forefront of supporting Remembering Srebrenica’s work. The event served the purpose of promoting cohesion amongst different faith groups and challenging hatred and intolerance. 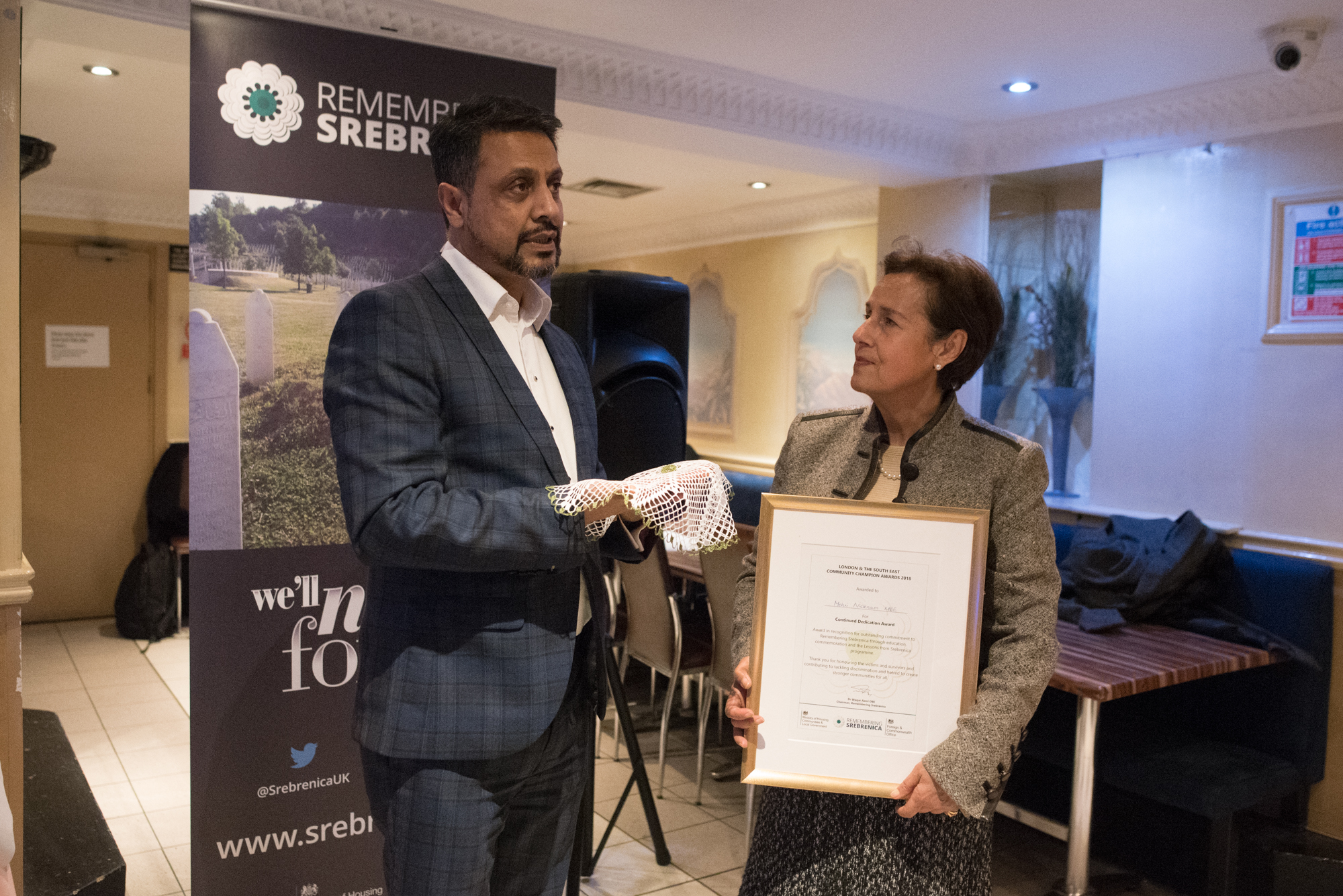 The Joseph Interfaith Foundation, based in London, has been instrumental in reaching out to different groups to educate about Srebrenica, and each year brings together a group of senior of Imams and Rabbis, from some of the largest Mosques and Synagogues in the UK to visit Srebrenica in order to strengthen community ties in the UK. The Director of the Foundation, Mehri Niknam MBE has also worked to educate young people about the Holocaust and Srebrenica genocide through a ‘Lessons from our common humanity’ programme.

“These awards have highlighted the work of unsung heroes whose dedication, as volunteers, to making their communities safer and stronger is truly humbling.”

Over 150 events took place in London and the South East this year to commemorate the Srebrenica genocide. The theme for this year’s Srebrenica Memorial Week was “Acts of Courage” as event organisers focused on how to work together to build a more courageous society.