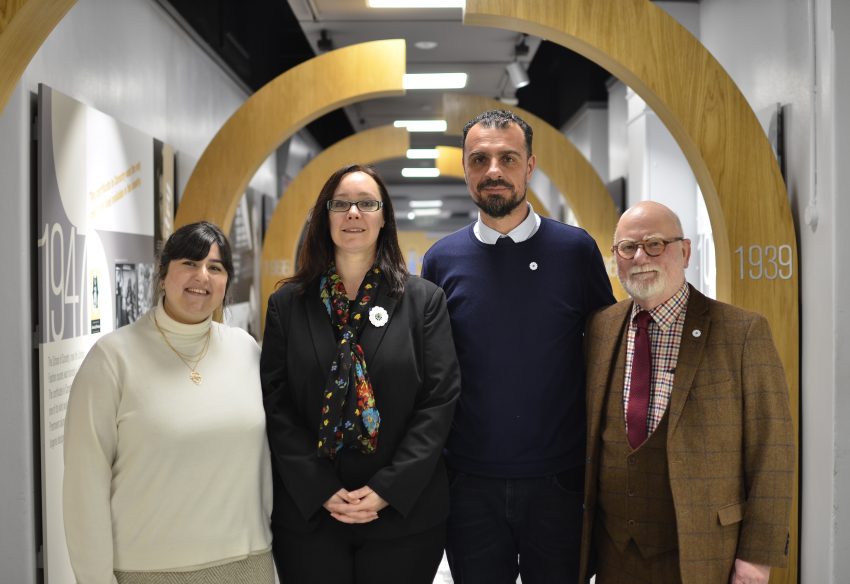 Rešad Trbonja, survivor of the Siege of Sarajevo and Remembering Srebrenica Co-ordinator has been made an Honorary Associate Professor in the Community and Criminal Justice Division at De Montfort University, Leicester.

This honour was bestowed on Rešad in recognition for his work as a genocide educator. Through Remembering Srebrenica, Rešad has educated 1,250 Community Champions by guiding them on educational visits around Sarajevo, the city which was under siege for almost four years and taking them to the site of the Srebrenica genocide, the worst atrocity on European soil since World War Two.

In addition to this, Rešad has spoken to over 5,000 young people across the UK through education tours, conferences and high profile events to share his own powerful story and educate people on the consequences of hate.

Rešad , who has lived in Sarajevo his whole life, was just 19 when the conflict broke out and survived 47 months of “hell”, living through the Siege. After nearly four years of bombardment, deprivation and bloodshed the Siege of Sarajevo came to an end in 1995, during which time, 11,500 Sarajevans were killed, including 1,601 children.

On being awarded the Associate Professorship, Rešad said:

“I am truly honoured to receive this and hugely grateful to De Montfort University and Remembering Srebrenica. I accept this award on behalf of all of the people who are no longer here to tell their stories.

“In Bosnia, we have been fighting for over 20 years for justice, and every day our fight continues, but many people in Bosnia still refuse to acknowledge what happened to us. It, therefore, means so much that people in the UK are willing to listen to stories from Bosnia, and take on board the lessons we can learn from this”.

Kim Sadique, Acting Head of the Community and Criminal Justice Division at De Montfort first met Rešad whilst on a ‘Lessons from Srebrenica’ educational visit. Since then, she has worked tirelessly to raise awareness of the genocide across the university and wider community in Leicester and was instrumental in getting this important recognition for Rešad work. She said:

” I am delighted that Rešad will be joining the Community and Criminal Justice Division here at De Montfort University . His powerful message about tackling hate and first-hand experience of conflict will be an invaluable asset to the University

British universities have a proud record of honouring Bosnian survivors of genocide and ethnic cleansing and in doing so they strengthen their voices.”

Nov 23, 2018Amil Khan
MAKE A DONATION
Remembering Srebrenica remains committed to honouring the victims and survivors of the genocide.

SIGN UP
November 23, 2018 Information
First ever "We Are One" Upstander Awards held in GloucestershireMinister for Faith Opens National Bosnian Centre