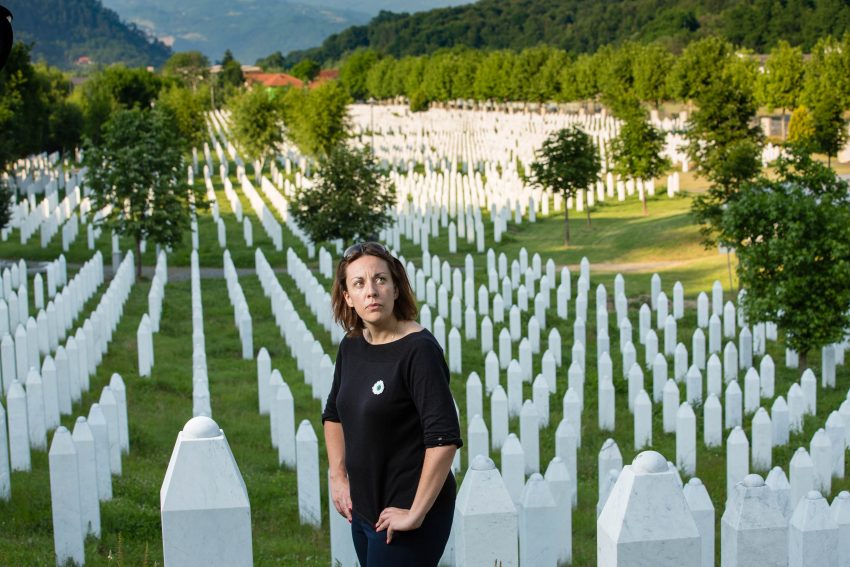 Kezia Dugdale MSP, the Leader of the Scottish Labour Party this week visited the site of the worst atrocity on European soil since World War Two.

Ms Dugdale travelled to Bosnia on a delegation from Scotland including Gail Ross MSP, journalists, educators, representatives from the Police and legal professionals.

She became the third party leader in Scotland to meet with survivors and the bereaved in Srebrenica, Bosnia-Herzegovina, following the visits of Ruth Davidson MSP and First Minister Nicola Sturgeon. Accompanying Ms Dugdale on her visit to Srebrenica was The Very Rev Dr Lorna Hood, the Chair of the charity Remembering Srebrenica Scotland, which works to commemorate the Srebrenica genocide and to tackle hatred and prejudice in communities across the country by learning from the past. Her visit came just under a month before Srebrenica Memorial Week in which the charity will break the silence about the devastating consequences of hatred to mark the anniversary of the genocide.

Kezia Dugdale said that her visit to Srebrenica had a left a powerful impression:

“My visit to Srebrenica was utterly harrowing. I witnessed first-hand the remnants of the genocide from mass graves to bullet holes in almost every post war building and indeed the degree to which hatred and intolerance continues to damage European countries to this day.

“The war and genocide is over, but Bosnia is left with a very fragile peace. In fact, despite there being literally thousands of graves from six days of slaughter in 1995, the Serbian Government still denies those events ever happened.

“The most disturbing location of my visit was an old refugee centre where the UN Dutch forces took in 5000 women and children before turning everybody else away. The men they turned away were effectively being turned into the hands of the Serbian army and each and every one of them was then slaughtered.

“Foreign affairs is complex and people have differing and passionate views on issues like Iraq, Libya and Syria but you can’t help but look at what’s happening around the world and ask whether we’re doing enough and whether we really have learned the lessons of the past.”

“Remembering Srebrenica Scotland believes it is vital that our political leaders see first-hand the importance of learning from what happened in Srebrenica, standing up to hatred, challenging prejudice and valuing what we have in common rather than what divides us. They come back keen to help our mission of building a movement that creates stronger, more cohesive communities in Scotland.”

July 11 marks the 22nd anniversary of the genocide of Bosnian Muslim men and boys in Srebrenica, – murdered because of their Islamic faith. The genocide in July 1995 was the culmination of a brutal campaign of ethnic cleansing, in which men were tortured and killed, while between 20,000-50,000 women were raped. This year, the charity is focusing their commemorations on breaking the silence on women’s experiences of the genocide.

In Scotland, Remembering Srebrenica’s National Commemoration will be held on Friday 14 July in the Mitchell Library in Glasgow, where the founder and head of the Association of Women Victims of War, Bakira Hasečić, will be giving her powerful testimony.

There's a fascinating session on how journalists covered the siege in Sarajevo being held on Friday - 6pm in the UK and 7pm in Europe. Do consider signing up. https://t.co/7n9LV9doyF

Six candles for six million Jews killed in Holocaust: Victims of the Bosnian genocide mark the International Holocaust Remembrance Day at the @SrebrenicaMC.