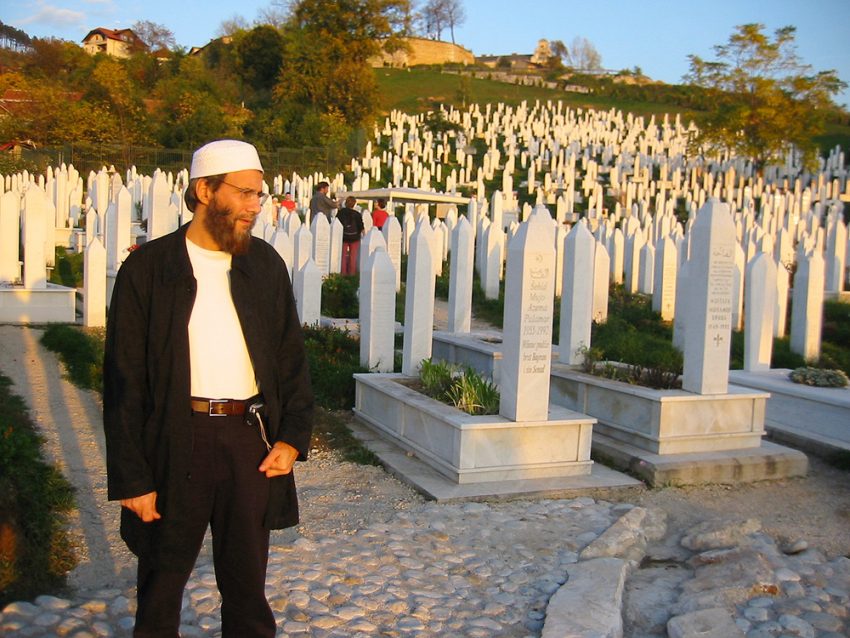 While the attention of world powers move to confront the toxic threat of Covid-19, isn’t it time the world also addresses that much more diabolical and corrosive pandemic threat to our humanity: wilful prejudice?

As ‘Black Lives Matter’ has raised the uncomfortable truth about nationalistic in-bred concepts about so-called ‘racial superiority’ it is important to look deeper beneath the skin of this grotesque sickness which has truly infected our world. What made Srebrenica possible was the failure of global consciousness to face up to its responsibility in halting the evil scourge called ‘Ethnic Cleansing’ in Bosnia in the 1990s. It was just another wake-up call which was conveniently ignored by governments as they reached for the snooze button again.

One thing this awful pandemic teaches us is how we can save more lives by altering our way of thinking, nations cannot remain independently healthy while ignoring the suffering of others – we just can’t. Every human being counts in the struggle for human survival and we all have a part to play. When something unjust happens in one part of the world it has an impact on our collective humanity.

Never was that so clearly demonstrated as it was in Bosnia during that darkest time, twenty-five years ago, with the barbaric slaughter of over 8,000 Bosnians, mostly sons and fathers, as mothers and babies were forcibly deported, having suffered widespread torture and rape, while the neatly uniformed, blue-helmeted army of UN ‘peacekeepers’ stepped aside. We only need to look around the world today to see that hunting and killing is business as usual, from Palestine to Kashmir, Myanmar to Xinjiang, North America to the Amazon and other forgotten regions, native descendants of the land are still fair game. It is another sign that humanity is speeding faster towards a more dangerously biased and violent world, where the weak have-nots and the increasingly powerful haves are hardly in view of each other anymore, and prejudice becomes so pervasive that people are willing to accept injustice – provided it doesn’t disturb their privileges.

Global Warming is just another ominous sign of the imbalance: Nature’s response is not indifferent and, as we can plainly see, can fight back! The link between man’s actions and the environment is mentioned in the following Qur’anic verse, “Corruption appears on land and sea because of the works men’s hands have brought about, that He may make them taste a part of that which they have done.”

The last Apostle of God gave some of the indications of an unwelcome future where time races so fast we can hardly catch a peaceful moment, he said, “Time will pass rapidly, good deeds will decrease, miserliness will be thrown (in the hearts of the people), afflictions will appear and there will be much Al-Harj.” Someone asked, “What is Al-Harj?” He said, “Killing! Killing!”

About eighty years ago, madness and war engulfed the world due to the aspiration of one man to elevate his nation to rule and dominate over all others. So we should beware, when leaders (whether they’re from the West or East) talk-up issues like making their nations first and foremost in economy and build-up their military preparedness, identifying ‘outsiders’ as the enemy, global imbalance rapidly magnifies and the consequences for peace and shared prosperity amongst weaker – who are the majority of mankind – dwindles to sub-human levels. And bad things happen. This does not mean that we should sit back or become or fatalistic, don’t get me wrong; it just means people of conscience should work harder. Twenty years from now you will be more disappointed by the things that you didn’t do than by the ones you did do.

One thing is for certain, those who were mercilessly slaughtered in those days of horror in Srebrenica will not miss the world this has become, though the victims’ graves are silent, their innocent blood still cries loud for justice in the hearts of the tearful loved ones they left behind.

In memory of The Little Ones, who will sit on ‘tall thrones’

Oh, they’ve killed all the Little Ones
While their faces still smiled
With their guns and their fury
They erased their young lives.

No longer to laugh,
No longer to be a child,
Oh, they’ve killed all the Little Ones
While their faces still smiled

But where will the devils go
When that day comes?
When the angels drag them out
To face The Little Ones

Jul 11, 2020Adam Smith
MAKE A DONATION
Remembering Srebrenica remains committed to honouring the victims and survivors of the genocide.