Lilian Black gives her personal reflections on her 'Lessons from Srebrenica' visit and draws parallels between events in Bosnia and her family's experience of The Holocaust. 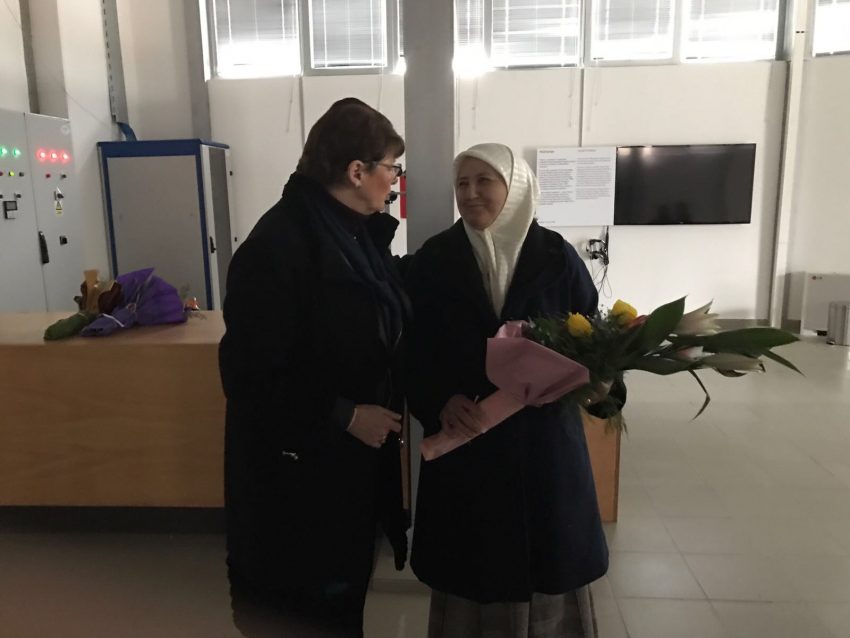 I was honoured to attend the UK delegation to Bosnia during February 2017.As the daughter of Eugene Black, a Holocaust survivor originally from Hungary, and Chair of the Holocaust Survivors’ Friendship Association (HSFA) in Leeds I know only too well about the Holocaust and what the end of persecution looks like. I learned about this as a child and later, on my own personal journey with my father, as he returned to the sites of his own persecution and the final discovery of the fate of his own family in Auschwitz-Birkenau. But I felt I did not know enough about Bosnia, which took place in my own lifetime.

When the Chairman of Remembering Srebrenica Dr Waqar Azmi came to look at our plans to build the new Holocaust Heritage and Learning Centre for the North within Heritage Quay at the University of Huddersfield, located in a region where we have a sizeable Bosnian and Muslim community, I felt I should find out more.

I am also, like many people, concerned at the increase in hate crime and what I perceive as the erosion of human values expressed in daily rhetoric against people seen as ‘the other’.

Such rhetoric can become normalised and leads on to actions. This we know from our own history. 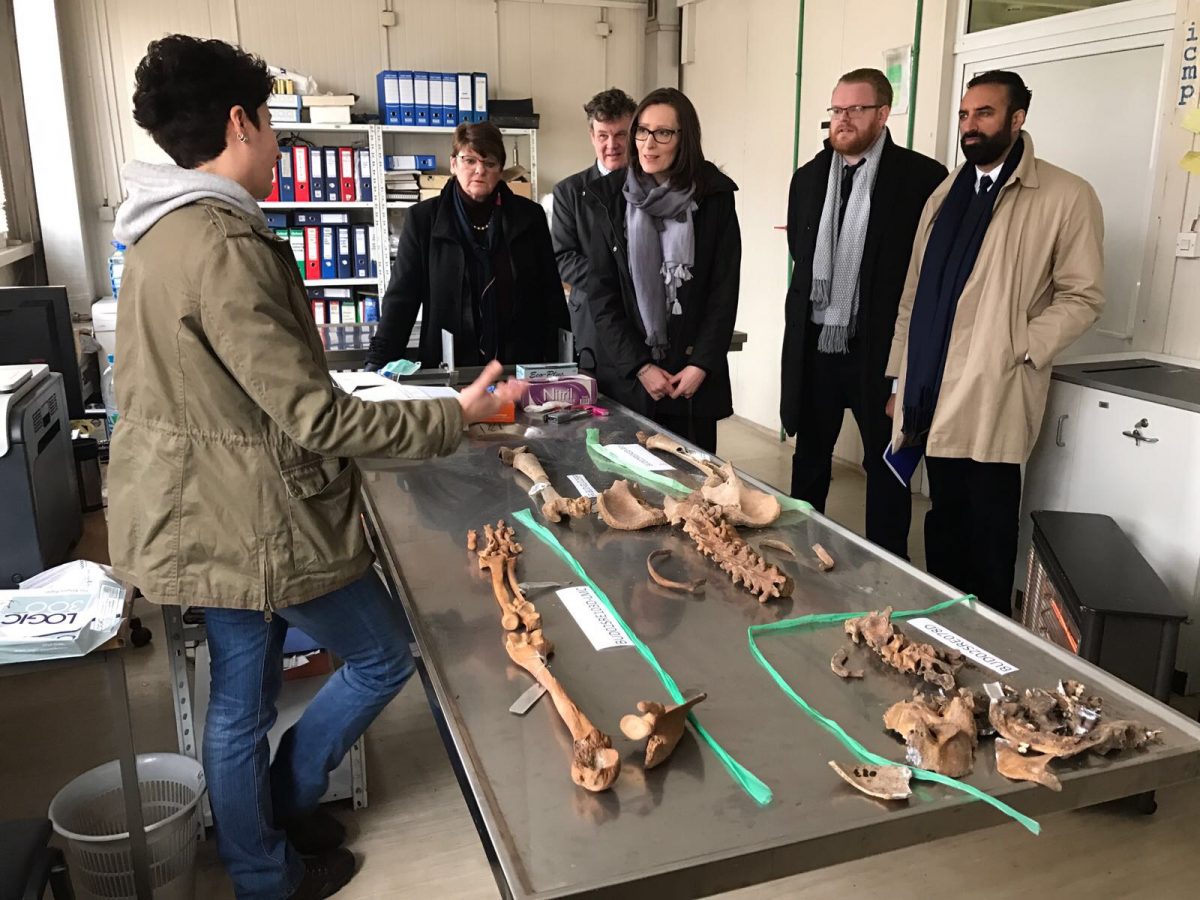 Lilian and delegates at the ICMP

Reflecting on the experience of the visit and in the wake of the release of the film ‘Denial’ – the Deborah Lipstadt and David Irving (Holocaust denier) libel case, what shocked me most is the level of denial which still exists that Srebrenica never happened. This is despite the courageous work of the Identification Project (International Commission for Missing Persons) which valiantly strives to recover the remains of mainly men and boys who were murdered because they were Muslim. They work tirelessly without much resource and in difficult conditions to give those who were so cruelly murdered their name and to return their bodies, or partial remains, to their families for the dignity of a decent burial and a place to visit in remembrance. This is critical work undertaken on behalf of families, but is made more difficult because of lack of resources. I hope the international community will discharge its moral obligation to those families which it failed and ensure this work continues until everyone is found who was murdered. There are still about a thousand bodies missing, just from Srebrenica.

I was struck by the intense agony of those mothers we met and their quiet dignity, strength and grace as they continue to live their lives without their men folk and sometimes without knowing where they lie.

Their generosity in sharing their stories is remarkable and reminded me so much of my father’s spirit. It reminded me also of one of our own HSFA members who is still looking for her mother seventy years on. There is no closure. I hope they continue to share their stories, to remind us all of our responsibilities to take appropriate action at the right time to protect people from such persecution and genocide for no other reason than who they are. 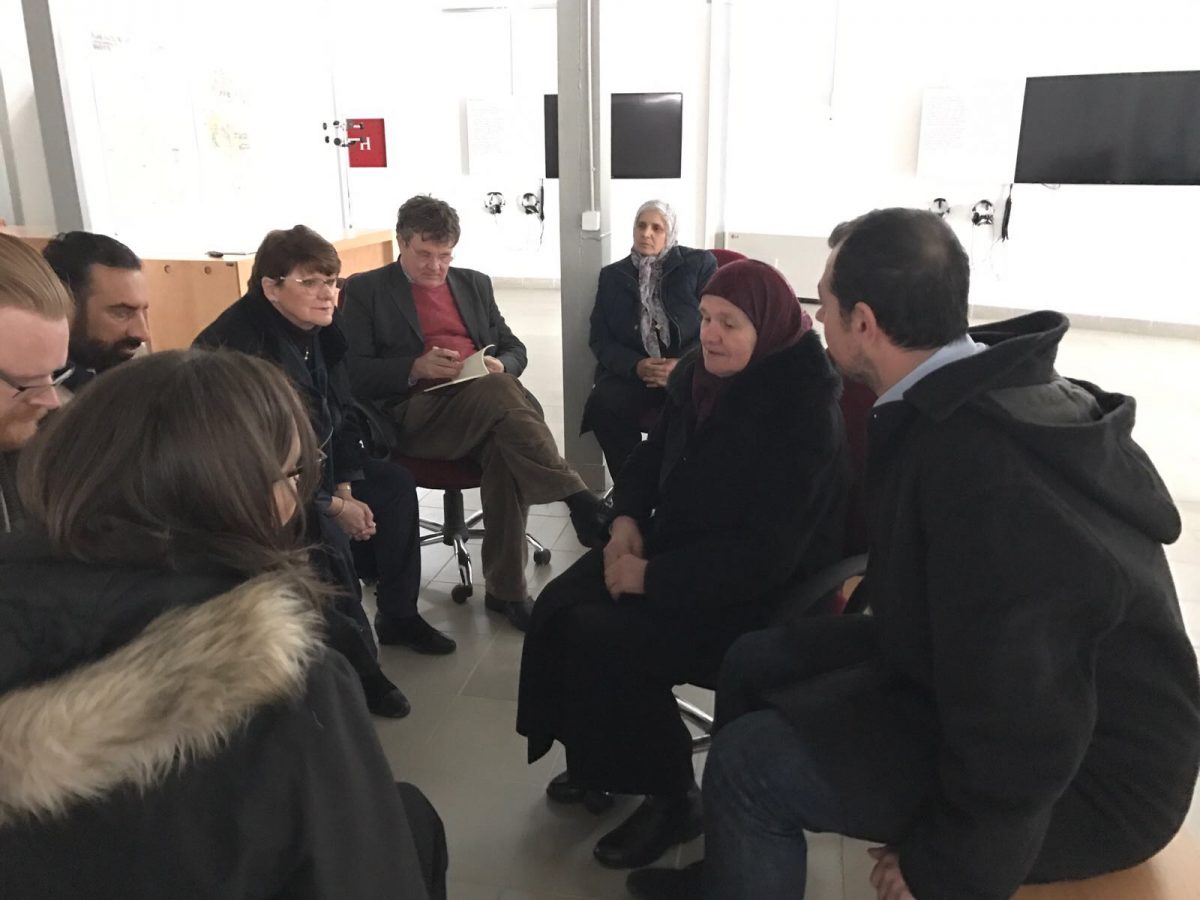 Mothers of Srebrenica giving their testimony

I was drawn by the parallels between the Holocaust and the genocide in Bosnia through the testimony of two male survivors. One, a young man who survived a mass shooting, and I reflected that this experience was the same as the Einsatz Gruppe actions, when hundreds of thousands of Jews were shot in pits. Bosniak survivors described so clearly how, before the war, they had lived together in harmony with their neighbours and how overnight some turned against them. They reflected on how they are still living amongst some of the perpetrators who had participated in the murder of their families. There are similar parallels as Jewish survivors faced the question of where to go and how to make a new life after the war. One of the Bosniak survivors described how his six year old child attends a school where they say it never happened and then goes home and asks daddy about it. This family does not know how long it can stay within this community. Such are the dilemmas for survivor families. I know it took Germany many years to fully acknowledge what took place in plain sight but it is an essential part of the process of finding a way to live with the aftermath of genocide, to acknowledge fully that it happened and to accept responsibility, and it is a long journey which takes a lifetime.

My abiding impression of the visit was that no matter who we met, everybody had a story of war, as a fighter, a victim or as a family member of someone who had been murdered. It is a country ill at ease, still suffering, which could implode at any moment.

I pay tribute to all of the Remembering Srebrenica staff, especially those in Bosnia. They do a remarkable job, but I know, too, that this is their life story and their hearts have been broken by the failure of humanity. I hope they know that by sharing so much of themselves they inspire us to be human and to do more back home in partnership with them.  I hope they know we have become friends.

Mar 20, 2017Amil Khan
MAKE A DONATION
Remembering Srebrenica remains committed to honouring the victims and survivors of the genocide.