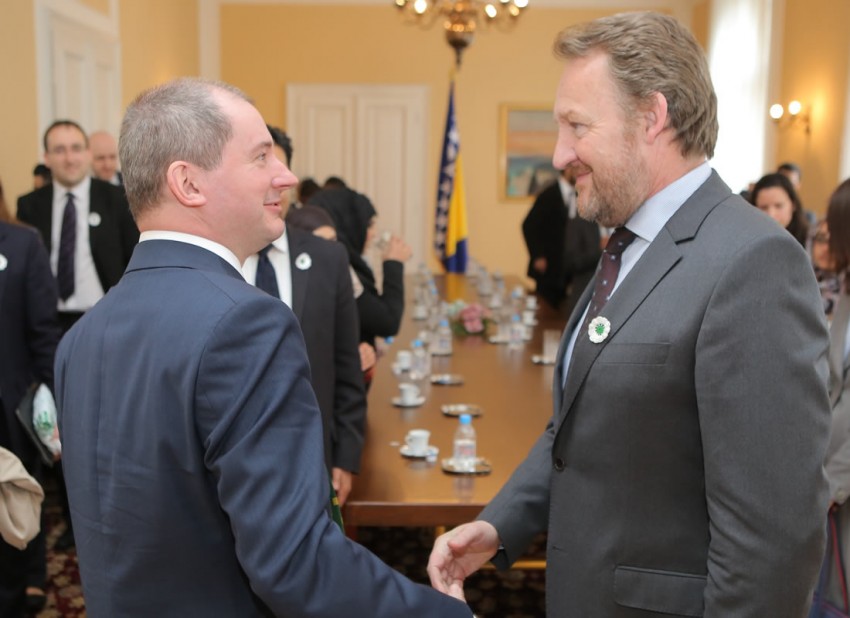 Stephen Williams MP, Parliamentary Under Secretary of State for Communities and Local Government, reflects on his visit to Srebrenica.

Peering out of the plane window as we descended into Sarajevo I could see the large detached houses with low pitched roofs that are a feature of the Bosnian countryside. Images flashed back into my mind of houses like these on fire.

My vivid memory was from twenty two years ago, when the full horror of the Bosnian civil war was beamed into our living rooms every night for three years. Sarajevo was under siege. The ghastly phrase “ethnic cleansing” became part of the language of war zone reporting. Such scenes were taking place in modern Europe, a half century after the continent had last been convulsed in a war where civilians were the main casualties. After the fall of the Berlin Wall in 1989 it seemed that at last west and east Europe were past the age of dictators and would enjoy peace, democracy and prosperity. But as Yugoslavia unravelled into its ethnic components, I was angry that the promise of a new Europe was slipping away as the EU, NATO and the UN seemed impotent in the face of well armed aggression, in particular from the Serbs who had seized most of the Yuogoslav federal army’s hardware.

Now I was visiting Bosnia for the first time, not as an angry young politician, but as a government minister, leading a delegation of young community leaders most of whom were infants in the 1990s with no contemporary memory of the civil war. Our visit was organised by the charity, Remembering Srebrenica. The massacre at Srebrenica in 1995 when 8,372 Bosnian Muslim men and boys were murdered by the Bosnian Serb army is recognised as an act of genocide, along with other post 1945 killing fields in Cambodia, Rwanda and Darfur. The government is funding the charity to enable over 700 young British community leaders to visit Bosnia to reflect on how advanced countries can so easily slip into barbarism and also to make a pledge to enhance community relations in our very diverse 21st century Britain.

Our three day visit started with a talk from the Director of the International Commission for Missing Persons. The ICMP was set up to deal with one of the grisly consequences of ethnic cleansing, a countryside pocketed with mass graves of unidentified bodies. As we soon learned, the bodies still being discovered are actually partial remains. The victims from those burned out villages, mainly men shot in the back of the head, were initially buried in mass graves. But soon after, in a desperate attempt to conceal the extent of their war crimes, the Serb soldiers dug up the pits with excavators , breaking up the bodies in the process and then scattering the remains over several sites many miles apart.

The full horror of this was revealed the next day (last Thursday) when we travelled to the ICMP’s mortuary and lab in Tuzla. In a chilled room, on shelves that resembled an archive or filing store, were bags of different sizes. Each bag contained unique remains, separated from each other by DNA testing. But these were not cadavers, rather they were skulls, femurs or just pieces of a rib cage.

In the lab we saw how the ICMP extracts DNA from the bones and then tries to make a match with the database of blood samples taken from Bosnians who are missing a family member. So far, over 6,000 matches have been made. Forensic science thus gives some closure to grieving relatives and also adds to the evidence of war crimes.

The Tuzla part of the trip was horrific, but the war was still to me something that I had studied in the media, books and now with what later generations would see as grisly archaeology. History would come alive when we travelled to Srebrenica, on the border with Serbia. Outwardly, it’s an unremarkable small town. But its name will surely be infamous in European history for many years. There we met survivors of the massacre that took place in July 1995.

First we met the Mayor, Camil Durakovic. Now in his mid thirties, he was just 16 when Serb forces surrounded his mainly Muslim town. He was the youngest member of the “death march” of men who fled into the mountains and forests to escape to the safe haven of Tuzla. Srebrenica itself should have been safe, as there were Dutch UN peacekeepers nearby. But in one of the most shameless episodes in the history of that organisation, they cooperated with the Serb forced evacuation of the town. Camil told me that only one of his school class mates survived.

We then visited the memorial at Potocari, a mile or so up the road, opposite the battery factory that had been the base of the Dutch soldiers, where many civilians had fled, hoping for protection. The field has 8,372 white marble columns, in the traditional Islamic design of gravestones. There is also a frieze, with each of the names of the victims. Our guide was Hasan Hasanovic. His story was particularly upsetting, as he had lost both his father and his twin brother, Husein. He introduced us to one of the most remarkable group of people I have met in my life, the Srebrenica Mothers. Most are widows as well as grieving mothers. We sat and listened in stunned silence as they told their stories. One woman had lost fifty five relatives. Almost twenty years on the anger was still burning and the grief palpable. They still seek justice and recognition from the rest of the world. The encounter will probably be the longest lasting memory of the delegation.

The next morning we met the spiritual and political leaders of the Bosnian Muslims. The Grand Mufti of Sarajevo told us that the Serbs were really victims too, as they have to live with the knowledge of the war crimes that many of them had committed or condoned. I spoke with the President, Bakir Izetbegovic (son of the leader who was a familiar presence on TV twenty years ago) about British government support for Bosnian membership of the EU and NATO. I believe that this is the political hope for the future. Slovenia and Croatia are already members of the EU. Two years ago I was in Macedonia, helping with their EU accession preparations. Serbia is also likely to be a member soon. Then the European family of nations can live up to the promise of the removal of the Iron Curtain. While this Easter we watch events in Ukraine, another cocktail of languages, religions and painful memories, let’s hope diplomacy triumphs.

Finally, what have we learned? On the wall of the photograph display in Sarajevo about Srebrenica is the quote attributed to my Bristol MP predecessor Edmund Burke, “All that is needed for evil to triumph is for good men to do nothing.” We can certainly reflect on that while looking at Ukraine or, on a more ghastly scale, Syria. But soon I will meet up with my new young friends from the delegation, to discuss what we can do to make our own towns and cities more cohesive and happy places to live.

First published here on 14 April 2014, republished with the kind permission of Stephen Williams MP. If you would like to read more of Stephen’s parliamentary blog posts you can visit his website.