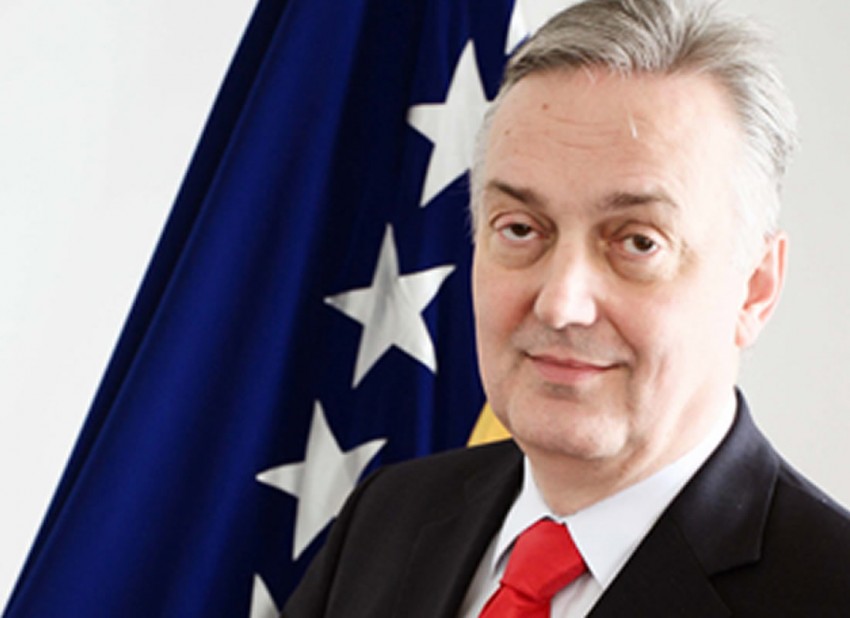 What are the Foreign Minister’s thoughts on the British Government being so proactive in its support of Srebrenica Memorial Day?

“The British Government has demonstrated its generosity, friendship and support to Bosnia and Herzegovina in countless way and on many occasions. Srebrenica Memorial Day is yet another example of historical sensibility on behalf of the United Kingdom, which rightly fuses basic human levels of empathy with civilisational lessons that ought to be instilled in the memory of generations to come.”

What lessons would the Foreign Minister like the world to learn from Srebrenica?

“Firstly, I believe that the horrific events in Srebrenica should remind the entire world that we constantly need to learn from history. Retracing our steps in history does not have to mean we are moving backwards—it is also a moral and virtuous way to face the future. Secondly, no matter how obvious it is, we should perpetually be vigilant and make sure that not only genocide, but nothing similar, ever happens again anywhere in the world. By paying tribute to the victims of Srebrenica and by keeping in mind all the dreadful consequences, the international community can be brought together in order to set up more effective mechanisms and legal framework that would prevent similar tragedies from occurring ever again.”

What could the international community do to instill greater stability in the Balkan region?

“The international community has done a great deal in the Balkans, including Bosnia and Herzegovina, if not stopping but at least ending the war, and especially after the war. Recent years have been marked by the increased ‘ownership’ of democratic processes by the peoples of the Balkans. The region has found several common denominators; namely, the European Union, regional reconnection and economic development. All of these elements contribute to the stability in the region and they enjoy the wide-ranging support of the international community.”

“We live in a very dynamic world and predictions should be made delicately to say the least. Nevertheless, I firmly believe that by 2020 Bosnia and Herzegovina will be a prosperous country, if not in the EU, then certainly in its region, acting as a confident and reliable international partner. Mid-term goals such as economic development and regional reconnection should set the stage for our strategic goal of full Euro- Atlantic integration. Of course, there will be challenges on our path towards the realisation of our potentials, but I am confident that by 2020 Bosnia and Herzegovina will be firmly on this path, keeping in mind that these are mere instruments for the ultimate social well-being of our citizens. But in order to achieve our goals in 2020, we have to do everything we can to show that the modern world has learned the right lessons, and go towards the direction of shared and not segregated societies.”

An amazing painting by Iain, following his visit to Srebrenica last November. #srebrenica25

The 11th of July 2020 will mark 25 years since the Srebrenica genocide. This is a painting of Kadefa Rizvanovic, one of the Mothers of Srebrenica I met when I visited in November with @RemSrebScot 2

If you are in Edinburgh on 25 Feb at lunchtime please join me at this event to Remember Srebrenica, hear from personal experience and think about our responsibility for the future @RemSrebScot @CTPIEdinburgh @Amy02400952 https://t.co/MXJZqMEDyH

The @RemSrebScot team at Braes High School today with @braeshistory, @DvdHmltn , @srebrenicahasan and @AoP_Scotland.
Special thanks to Hasan for sharing his personal story and advice with over 300 kids and to Fiona Malcolm for pulling it all together.

A packed hall, everyone transfixed and listening intently.

This morning Sarah is at @BraesHigh to hear @srebrenicahasan speak to young people about his experiences.

Hearing from survivors is crucial to learning from history.