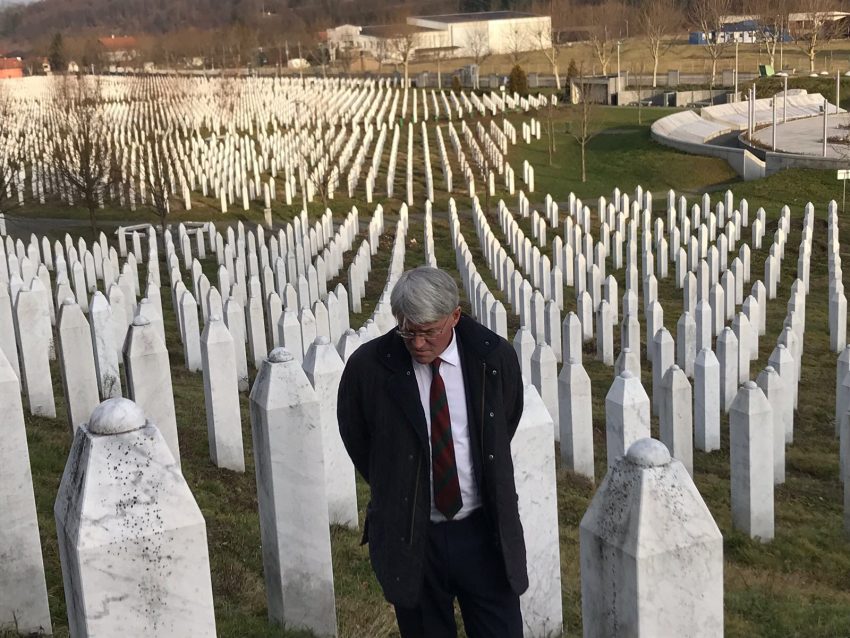 Andrew Mitchell MP returned last week from a sobering three-day visit to Bosnia-Herzegovina to mark the genocide in Srebrenica, the worst atrocity on European soil since the Second World War.

11 July marks the 23rd anniversary of the genocide of Bosnian Muslim men and boys in Srebrenica, – murdered because of their Islamic faith. The genocide in July 1995 was the culmination of a brutal campaign of ethnic cleansing, in which men were tortured and killed, while between 20,000-50,000 women were raped.

During his visit, Andrew Mitchell met with the President of Bosnia-Herzegovina, Bakir Izetbegovic, and survivors of the genocide including the Mothers of Srebrenica, an organisation that supports and represents the female survivors. Mr Mitchell also paid his respects at the site of over 8,000 graves that commemorate those brutally murdered in 1995.

Reflecting on his time in Bosnia-Herzegovina, Mr Mitchell said:

“The systematic murder of thousands of innocent people at Srebrenica is a terrible warning to the world. When we said ‘never again’ after the Holocaust, we failed to give meaning to those words.

“What happened at Srebrenica stands as a warning to all of us that genocide, ethnic cleansing, and identity-based violence remain an ever-present threat and danger in our world today.”

On returning to the UK, the Sutton Coldfield MP reaffirmed his commitment to making sure that the lessons from Srebrenica are learnt. A declaration against genocide and identity based violence has been drafted and Mr Mitchell will take part in events in the West Midlands to commemorate the Srebrenica genocide during Srebrenica Memorial Week, which takes place between 8 – 15 July 2018.

“As former International Development Secretary, and someone who recently launched the Conservative Party Declaration on Genocide, we were honoured that Andrew was able to join the ‘Lessons from Srebrenica’ programme to pay respects to the thousands of victims of the Srebrenica genocide & help bring back the lessons to tackle hatred and intolerance in our communities. It has never been more important to help combat prejudice and discrimination, and teach future generations to challenge intolerance to build a better and safer society for all”.

Jan 15, 2018Amil Khan
MAKE A DONATION
Remembering Srebrenica remains committed to honouring the victims and survivors of the genocide.

SIGN UP
January 15, 2018 News
Remembering Srebrenica Comments on Events at the ICTYThe Power of Words