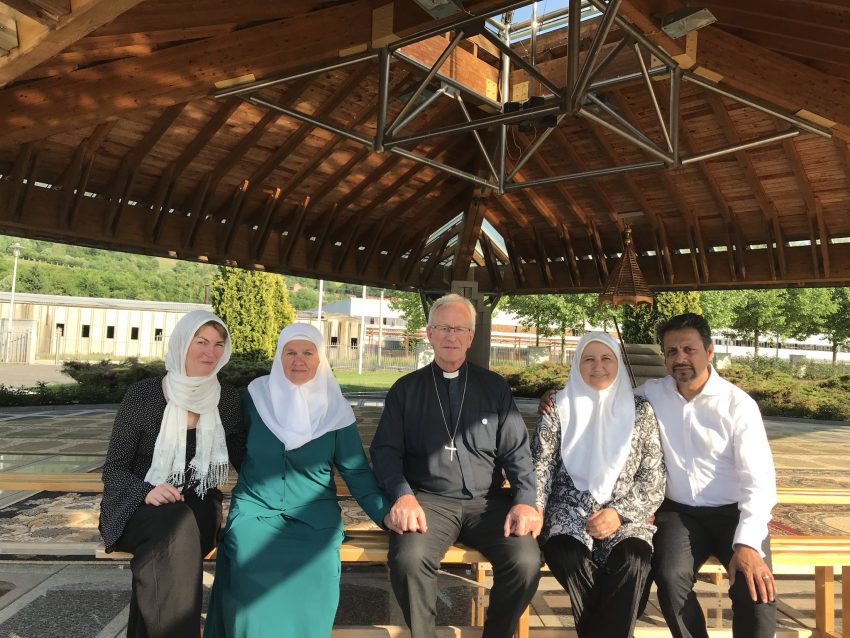 The Right Reverend David Urquhart, Bishop of Birmingham is the first Anglican Bishop in the UK to pay respect to the victims of Europe’s 1995 genocide in Srebrenica which has been described by the UN as the ‘worst atrocity on European soil since the Second World War’.

On the first day of the delegation, The Bishop had a tour of Sarajevo, the capital of Bosnia-Herzegovina. Sarajevo is sometimes referred to the as the ‘European Jerusalem’ because of the religious diversity of the city. It is perhaps one of the few places in the world where you can find an Orthodox Cathedral, a Synagogue and Mosque less than a five minutes-walk apart. Bishop David also met with the Chief Imam of Sarajevo, who is a spiritual leader for Muslims.

Bishop David paid his respects at the Srebrenica Memorial site in Potočari where over 8000 Muslim men and boys were systematically killed in one week because of their faith.  Whilst in Potočari, The Bishop of Birmingham met with the ‘Mothers of Srebrenica’ who lost sons, husbands and other male relatives in the genocide.

“The devastating loss of life at Srebrenica was a powerful and urgent reminder of the suffering caused when hatred flourishes and humanity’s capacity for violence and destruction is left unchecked. Witnessing the consequences of brutality and genocide in a country where tolerance and religious diversity had been the norm left me in no doubt at all that we must ensure that we do everything we can, in Britain and across the world, to build cohesive and connected communities while tackling hatred and intolerance”.

“Meeting the Mothers of Srebrenica and other survivors of the war, in contrast, reminded me of the strength and resilience of the human spirit, the human capacity for love and relationship and our potential to live with courage and compassion.  As faith leaders, we must be committed to building communities which nurture these values and form people with strong souls that cannot be swayed to hatred by propaganda, politics or prejudice”.

The Bishop of Birmingham added:

I am very grateful to Remembering Srebrenica for the opportunity to spend time in Bosnia-Herzegovina and for the people we met who generously shared their stories with us, with great dignity, despite their pain and loss. They will remain in my prayers as I continue to pray for the peace of Bosnia-Herzegovina.”

In Srebrenica, young boys and men were separated by the Bosnians Serb Army to be put in concentration camps and then murdered and women were taken to rape camps. it is estimated that up to 50,000 women were raped simply because of their identity.

The bodies of those murdered were initially thrown in mass graves, however, when the Bosnian Serb Army realised that their crimes would be found out they dug up the mass graves using diggers and moved the body parts in trucks at night over several months to different parts of the country where they were buried in smaller secondary and tertiary graves.

Twenty three years on, using DNA techniques, bodies are still being found by the International Commission on Missing Persons. It is such evidence and the testimonies of the Mothers that has resulted in the prosecution of General Ratko Mladić  on 22 November 2017 in The Hague which found him guilty of genocide and crimes against humanity and sentenced him to life in prison.

Despite this, genocide denial is rife and growing in the Balkans. And those who deny the genocide also glorify those perpetrators like General Ratko Mladić as heroes.

Dr Waqar Azmi, Chair of Remembering Srebrenica, who attended the delegation with the

‘It is an honour accompany the Bishop of Birmingham on one of our ‘Lessons from Srebrenica’ Visits programme. It means so much to the survivors of genocide and local communities in Birmingham as well as across the UK that a Church of England Bishop has come to bear witness to what happened at Srebrenica and hear their testimonies. We look forward to working with the Bishop in tackling hatred in order to help build stronger safer and cohesive communities’.

May 17, 2018Amil Khan
MAKE A DONATION
Remembering Srebrenica remains committed to honouring the victims and survivors of the genocide.