The First Minister of Scotland, Nicola Sturgeon, yesterday visited the site of the worst atrocity on European soil since the Second World War with Remembering Srebrenica 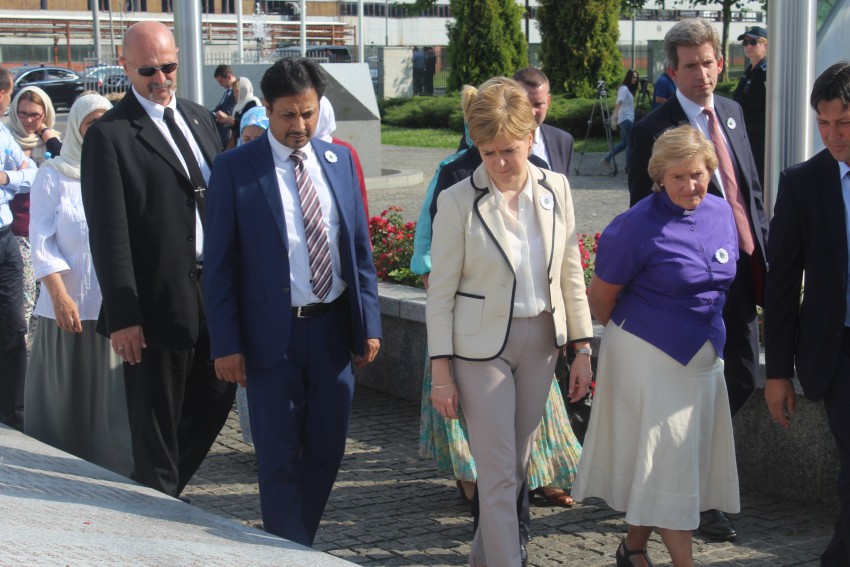 After visiting the Srebrenica-Potocari Memorial and walking amongst the thousands of graves, the First Minister place a wreath of remembrance at the memorial to honour the victims and wrote in the book of remembrance saying:

In memory of those who died in the genocide committed in Srebrenica in 1995. May you find justice, peace and may the word support you and learn the lessons of Srebrenica. You are forever in my thoughts”

Prior to her visit, the First Minister pledged to remember the Srebrenica genocide saying:

“The Scottish Government will preserve the memory of the Srebrenica genocide – the worst atrocity on European soil since the Holocaust – through education, commemoration and close relations with Remembering Srebrenica Scotland. We too have a role and responsibility to ensure future generations are able to remember and learn from the failure to protect Srebrenica.”

Following the First Minister’s attendance at the 20th anniversary commemoration for Srebrenica in Edinburgh in 2015, she met with the Mothers of Srebrenica and promised to visit the site of the genocide following their invitation. During the visit, Ms Sturgeon met with the President of the Association of the Mothers of Srebrenica, Munira Subašić, who lost her husband and her youngest son in the genocide. Munira said:

When people come to Srebrenica to hear our stories it means that there is still good in this world.”

“At times, that was hard to believe, but we still believe in good. When we welcome visitors to Srebrenica it means that these people have come to hear our stories and to protect the most important human values and to stand with us to create a better world in challenging hatred”.

Dr Waqar Azmi, Chairman and founder of Remembering Srebrenica, welcomed the visit of the First Minister and the powerful message it sends to other world leaders saying:

“The lessons we can learn from Srebrenica of standing up to hatred, challenging prejudice and seeing what we have in common rather than what divides us, have never been more important. We have seen an increase in hate crime in the UK in recent times and Srebrenica teaches us what this could lead to if left unchallenged.”

The Very Rev Dr Hood, Chair of Remembering Srebrenica Scotland was also on the visit with Ms Sturgeon and was delighted that the First Minister had been able to keep her promise to the mothers of Srebrenica. She said:

“In making this visit the First Minister is keeping her promise to the Mothers of Srebrenica and to the survivors of the atrocity who met with her after she spoke at the memorial event in St. Giles Cathedral, Edinburgh last year. Remembering Srebrenica is delighted that the First Minister has been determined to keep that promise and to support the aims of the charity to fight and challenge hatred wherever it occurs but especially in our own communities”

With the Mothers of Srebrenica

Signing the book of remembrance

Writing in the book of remembrance

Aug 22, 2016Amil Khan
MAKE A DONATION
Remembering Srebrenica remains committed to honouring the victims and survivors of the genocide.