Gloucestershire’s second “We Are One” Awards celebrates everyday upstanders 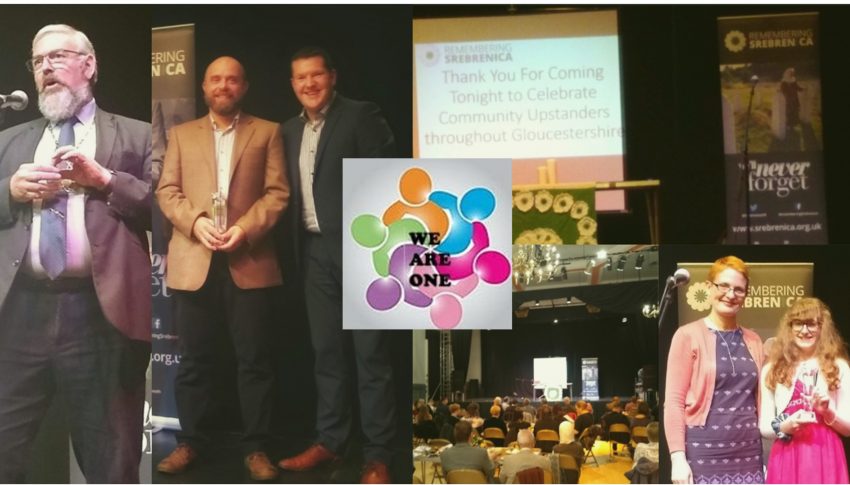 On 14 October, Gloucestershire held its second ‘We Are One’ Awards ceremony, which recognised the amazing work of everyday upstanders who challenge prejudice, build community cohesion, protect others, counter hate and generally make their communities a better, safer place. Nominees were selected by the good people of Gloucestershire.

There were five categories for the We Are One Awards: Young Upstander, Young Adult Upstander, Community Upstander, Public Services Upstander and Lifelong Upstander.

Listed below are the category winners of the We Are One Awards 2019:

Edie decided she wanted to do something after learning about evacuees from war-torn countries at school. She learned about Syria and wanted to help. With her mother’s help she came across Gloucestershire Action for Refugees and Asylum Seekers (GARAS) and began fundraising for them. She did jobs for aunties, her granny, next door neighbours, friends, at school and donated Christmas presents, her bike, toys, clothes and her time. She made friends with a Syrian girl when she arrived in her primary school and helped her to make friends. Edie, who is only 11 years old, has learnt about different cultures and is a wonderful example of what anyone can do.

Johneh has done so much for the local LGBTQ+ community in Cheltenham, such as organising an under 18s event for LGBTQ+ youth and putting on sold out drag shows in Cheltenham over the last five years. In doing so he has created safe spaces for LGBTQ+ people, a sense of community and opportunities for upcoming drag artists. In addition to that he regularly promotes LGTBQ+ rights, supports local pride events and gives advice to new artists. Johneh inspires others with his help for all ages and gender identities in the local community.

Dan is a dedicated Community Upstander. He constantly strives for community improvement by leading community activities such as the Special Olympics Gloucestershire and ‘Fuel Thursdays’, and supporting local people into work through the ‘Going the Extra Mile’ programme. Dan dedicates countless evenings and weekends to creating opportunities for others, such as encouraging young people into sport and away from crim and, as a trustee of Building Circles, supporting equality for adults with learning difficulties. Dan’s colleagues say that he is always generous with his time and helps others without seeking recognition or reward.

Jaroslaw is Founder and Chairman of the Polish Association Gloucestershire. He established a Saturday school for Polish-background children and created two successful annual festivals in Gloucester: Polish Heritage Day and International Children’s Day. He also runs a Christmas meal for local homeless and vulnerable people and was recently selected to be the Mock Mayor of Barton. All his efforts are as a volunteer while working shifts at a local technologies firm. Jaroslaw is known to support anyone who needs help.

Paul is an advocate for the hate crime work within Gloucestershire Constabulary and regularly supports efforts to raise awareness and understanding while championing both the young and elderly. He does this on top of his daily duties. Since becoming a Constabulary hate crime champion, he continuously raises awareness with other departments and educates staff. Paul is passionate about helping victims who are targeted for their differences and contributes much of his own time to tackle it.

Ebrahim’s hard work as a volunteer in both Cheltenham and Gloucester Royal Hospitals for over ten years has not gone unnoticed by his colleagues. He has provided a huge amount of support to Muslim patients, families and staff with their specific religious needs, such as access to prayer facilities, provision of halal food and out-of-hours assistance with end-of-life care needs. Ebrahim is an upstanding volunteer in Gloucestershire who ensures people have the right support when they need it most.

Reflecting on the process for choosing the category winners and the importance of the We Are One Awards, Chair of Remembering Srebrenica UK’s South West Board, Dr Louise Livesey said:

In its second year the Gloucestershire We Are One awards received a wealth of nominations, which made the judging panel’s job challenging but more importantly showed the range of ways in which people are working to make Gloucestershire a place that doesn’t accept intolerance and division. This echoes some of the inspiring stories of the victims and survivors of ethnic cleansing and genocide from Bosnia who bridged the divide between communities and confronted hate. Whether it’s our Young Upstander helping Syrian refugees in the county or our Community Upstanders working to build inclusive social activities and supporting the most vulnerable members of society, including the homeless, these Upstanders remind us that in the sea of disappointing, saddening or tragic stories, being able to focus on the good in the world is a powerful experience.

SIGN UP
October 18, 2019 News
Statement on the award of the Nobel Literature Prize 2019 to genocide denier, Peter Handke.Lord Bourne of Aberystwyth calls on government to support Remembering Srebrenica UK in 25th anniversary year