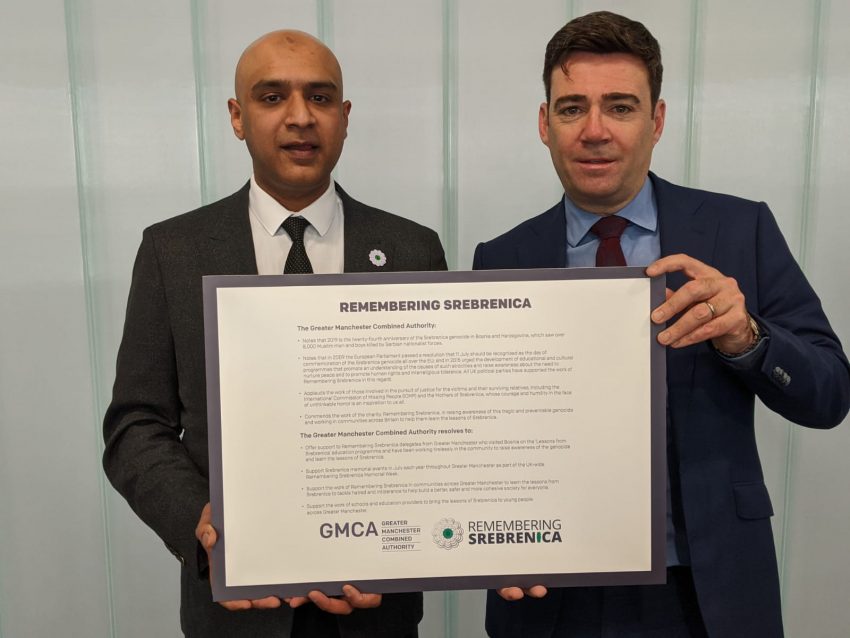 Council leaders have passed a motion to commemorate the victims of the Srebrenica genocide, in which more than 8,000 people, predominantly Muslim men and boys, were killed during the Bosnian War.

Ahead of the 25th anniversary in July 2020, leaders unanimously backed the motion brought to the Greater Manchester Combined Authority (GMCA) meeting on Friday 29 November to recognise 11 July as the day of commemoration of the Srebrenica genocide. They agreed to support the work of communities and schools across Greater Manchester to tackle hatred and intolerance by raising awareness and educating people about genocide and the events that took place in Srebrenica.

The massacre in Srebrenica was the worst atrocity on European soil since the Second World War. On 11 July 1995, more than 8,000 people were killed and a further 20,000 were expelled by Bosnian Serb forces attempting to annex the territory in eastern Bosnia and Herzegovina, in what the International Criminal Tribunal for the Former Yugoslavia concluded amounted to genocide.

On 11 July all councils are invited to take part in an annual civic ceremony in Manchester Cathedral, and the GMCA will support commemorative events throughout Greater Manchester as part of the UK-wide Remembering Srebrenica Memorial Week.

Earlier this year the Greater Manchester Youth Combined Authority (GMYCA) passed its own motion to commemorate the Srebrenica genocide and support the work of UK charity Remembering Srebrenica.

“By passing this motion, leaders across Greater Manchester have resolved to commemorate the victims of the Srebrenica genocide, and reaffirmed our commitment to never let hatred and intolerance go unchallenged in our communities.

“We want to recognise all those who’ve worked tirelessly in pursuit of justice for the victims and their surviving relatives, including the International Commission of Missing People and the Mothers of Srebrenica, and their heroic efforts to keep the legacies of their family members alive.

“All of us have a constant duty to remember and reflect not only on these events but also what led to them, and to do everything within our power to prevent this kind of hatred from ever taking root in our societies again.”

The charity has been taking delegates to Bosnia as part of their “Learning the Lessons” programme since 2013, and to date 130 individuals from Greater Manchester have participated, including faith leaders, councillors and teachers. All have since been working to raise awareness of the ultimate consequence of hate, using the lessons of what happened in Srebrenica and Bosnia during the 1990’s.

Elinor Chohan, Chair of the Northwest Board for Remembering Srebrenica, said:

“With a rise in hate crime and the growth of those who promote division, we are inspired and encouraged that GMCA is taking a lead in bringing people together across Greater Manchester to remember those who perished in the Srebrenica genocide and to unite communities against hate.

“The support of GMCA for a range of events, activities and promotion of our educational resources will play a powerful part in changing and challenging attitudes and behaviours, allowing people from our wonderfully diverse and vibrant communities to come together with a focus on building bridges based on our shared core values of humanity and empowering them to take action.”

Remembering Srebrenica is a British charity that works together communities to remember the genocide by educating people about what happened, organising commemoration events, and conducting educational visits to meet with survivors.

In 2009 the European Parliament passed a resolution that 11 July should be recognised as the day of commemoration of the Srebrenica genocide all over the EU, and in 2015 called for the development of educational and cultural programmes to promote a better understanding of the causes of such atrocities, and the need to promote peace, human rights, and cohesion. All UK political parties have supported the work of Remembering Srebrenica in this area.

“I’m proud that as a Combined Authority we have made a commitment to remember the victims of the Srebrenica genocide and to acknowledge the important work of charities like Remembering Srebrenica to raise awareness and educate people about what happened twenty-four years ago.

“We want to use this as an opportunity to bring our communities together and strengthen the bonds of solidarity that exist between Greater Manchester and people all around the world.”

SIGN UP
December 2, 2019 News
Former war crimes investigator's book covers his work at The Hague in the 1990sRemembering Srebrenica's 2020 Theme: Every Action Matters