Pupils at a London school have been working with 15 other schools around the globe to help raise awareness about genocides since the Holocaust, following their meeting with a Srebrenica survivor earlier this year. 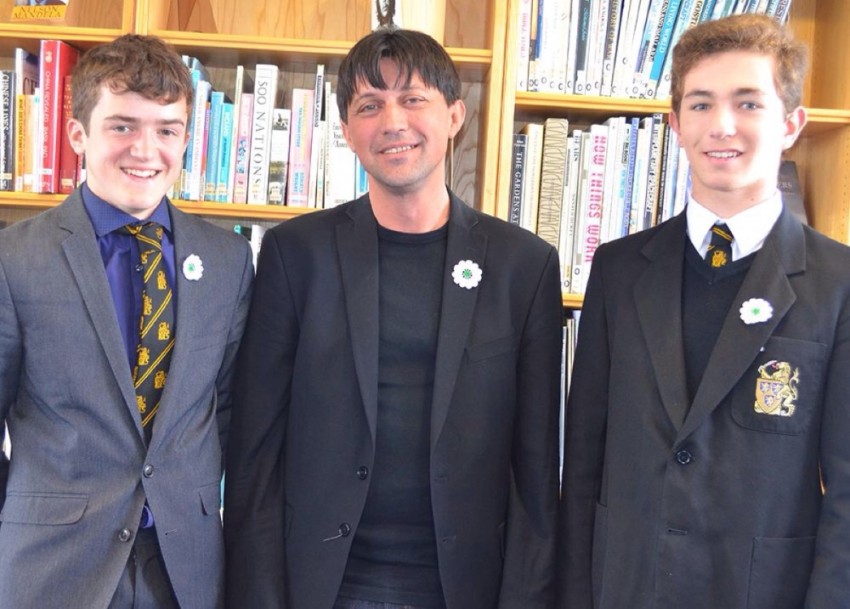 Bosnian Muslim Hasan Hasanović walked 63 miles across gruelling terrain to escape death at the hands of Bosnian Serbs in July 1995. He spoke to students at four West London schools – including Hampton School – enabling the next generation learn about the genocide at first hand.

Now a group of pupils at the school, in Twickenham, have formed a group, ‘Genocide, through our Eyes’, involving schools from as far afield as Canada, the USA and Thailand.

They set up the group in response to a significant knowledge gap about the issue, publishing research on 9 December 2015 – the UN’s International Day of Commemoration of the Victims of Genocide – to reveal that 81% of 11-16 year olds cannot name a genocide since the Holocaust.

Members of Genocide, through our Eyes launched their research at a meeting with Sir Eric Pickles, Olivia Marks-Woldmann, CEO of the Holocaust Memorial Day Trust and Eric Murangwa, survivor of the genocide against the Tutsi in Rwanda, at the House of Commons.

Hampton School sixth-former James Ingram, pictured left with Hasan, is one of the leaders of the group and attended the lecture by Hasan Hasanović in March. He said:

Learning about modern genocides is really important. I used to think that, after the Holocaust, ‘Never Again’ meant exactly that. It didn’t. If we are to prevent future genocides we have to learn from the mistakes which we seem always to repeat.

“Hasan’s story is amazing. Even through the horror of war and tragic events such as the Srebrenica genocide, people like Hasan show that we can adapt and succeed in the face of adversity.”

Aged 19 at the time, Hasan survived by joining thousands of other Bosnian Muslims who attempted to save their lives by walking across mountains, rivers and minefields to safety in the nearest Muslim territory of Tuzla.

Many never made it. Hasan reached Tuzla after walking for five days and six nights. He lost his father, brother and uncle, but was reunited with his mother, younger brother and grandparents. Many thousands of men and boys were systematically murdered and did not make it.

Hasan is now a curator at Bosnia’s Srebrenica-Potočari Cemetery and Memorial Centre. During his visit to London, he recounted his experiences to secondary school students from Hampton School, Reach Academy Feltham, Waldegrave School and Hampton Academy.

I commend the young people from schools around the country who have conducted this meaningful research. Whilst it is heartening that almost three-quarters of pupils surveyed know about the Holocaust, we must raise awareness of other genocides such as Srebrenica.

“It is vital that our young people learn the lessons from genocide so that they can lead the challenge against hatred and intolerance, whilst helping to create a better, safer, more cohesive society.”

Remembering Srebrenica and Hampton School organised Hasan’s visit in March, as part of the school’s Genocide80Twenty project. This was established after a recent survey found that 80% of young people were unable to name any act of genocide since the Holocaust.

Dec 10, 2015Amil Khan
MAKE A DONATION
Remembering Srebrenica remains committed to honouring the victims and survivors of the genocide.