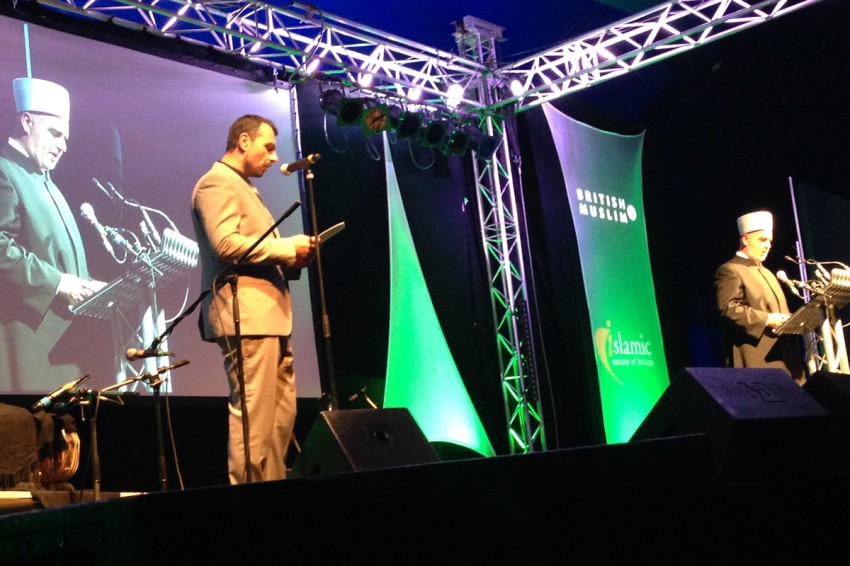 Last week His Eminence Husein Kavazović, the Grand Mufti of Bosnia & Herzegovina, visited the UK to take part in a concise programme designed by Remembering Srebrenica in association with Living Islam Festival.

The Reis began his visit as guest of honour at a private dinner hosted by the Ambassador of Bosnia, His Excellency Mr Mustafa Mujezinović. The reception was attended by key faith, political and cultural leaders, including Mehri Niknam MBE, director of the Joseph Interfaith Foundation, Canon David Porter, director of reconciliation for the Archbishop of Canterbury, Imam Ibrahim Mogra of the Muslim Council of Britain, Shuja Shafi, Secretary-General of Muslim Council of Britain, Maulana Shahid Raza, British Muslim Forum, and world-renowned artist and designer, Dr Ahmed Moustafa.

On Friday His Eminence led Jum’ah prayers for the Bosnian Diaspora in London, before meeting with leading Islamic scholars and leaders from the Muslim community at the North Manchester Jamia Mosque for an evening reception.

The visit culminated in participation at the Living Islam Festival, Lincolnshire, where the Reis spoke alongside Dr Waqar Azmi OBE, chairman of Remembering Srebrenica. In a keynote address to an audience of several thousand, he urged those in attendance to stand on the side of justice in promoting the importance of tolerance and religious harmony:

“One of the most effective ways of building solidarity and trust is to uncompromisingly stand on the side of justice and truth, wherever and whenever it is needed … Whenever we feel that it is difficult to build bridges of trust, as sometimes it is, we must think of those who are trying to minimize the number of these bridges. Their efforts need to be stopped, because we believe that our worlds are more beautiful when our shores are connected by bridges, than when there is a gaping void in our spirit.”

Earlier in the day the Reis had spoken alongside Dr Azmi in a packed discussion session considering the question:  “Bosnia: Model for a European Islamic Culture?”

The Grand Mufti is a great supporter of Remembering Srebrenica’s work. He regularly hosts delegates visiting Bosnia and Herzegovina as part of the charity’s Lessons from Srebrenica education initiative. This aims to draw lessons from the Srebrenica genocide in which Bosnian Serb forces killed more than 8,000 Bosniak men and boys, lessons that can then be used here in the UK to strengthen British society. During his visit to the UK he thanked the United Kingdom, and particularly Remembering Srebrenica, for honouring the victims of Srebrenica and keeping their memory alive