Members of our latest delegation share their reflections following visit 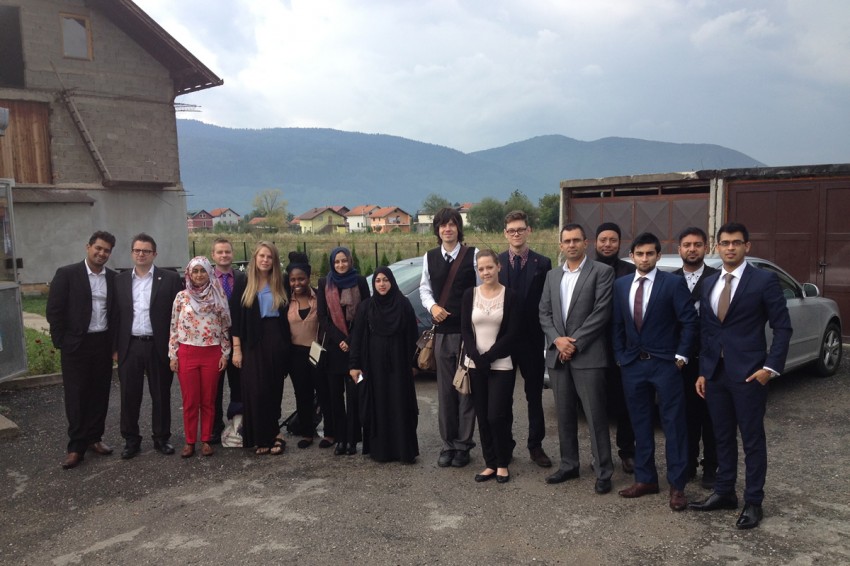 In early September, Remembering Srebrenica sent a group of 14 young leaders on one of its Lessons from Srebrenica education visits. The group visited the International Commission on Missing Persons (ICMP) to better understand the forensic work that underpins finding those missing as a result of the 1992-95 conflict, the mass killings that occurred across the country, and the Srebrenica genocide.

At the Potočari Memorial site, they met with some of the Mothers of Srebrenica for a touching very personal insight into the loss that the survivors deal with on a daily basis. British Ambassador Edward Ferguson, himself recently arrived in Sarajevo, hosted the group for a discussion about the lessons to be learned from Srebrenica and its continuing legacy in Bosnian society.

To garner some insight into the horrors of the Bosnian conflict the group spent some time at Sarajevo’s Tunnel Museum, and visited the gallery of photographer Tarik Samarah, who has, to great acclaim, documented the story of Srebrenica through his work.

The delegates were particularly engaged with the material during their four-day visit, and we’ve collected their thoughts and reflections on what proved to be a particularly powerful visit.

One of things that Remembering Srebrenica aims to do is to introduce a range of people to first-hand experience of the terrible outcomes of division. We choose people from all faiths, all backgrounds, and from across the UK for our delegations. This struck a chord with several of the delegates, including Wangu Mureithi. Wangu described it as a “magnificent visit,” which brought together “people from different parts of the country and all walks of life for the same cause; great friendships and networks are built as a result of this.” This resonated with Seema Awan, who said: “To meet people from such different backgrounds who felt strongly about the situation in Bosnia gave me hope about the situation for Muslims in the UK, it made me feel hopeful and part of community.”

The resilient character of the Bosnian people whom the delegation met touched all of the delegates. Remembering Srebrenica champion, Husna Rasul, voiced the thoughts of many when she said:

“I heard the stories of so many inspirational individuals, each had suffered a great deal and yet each demonstrated such great strength of character. I had seen the effects of some of the most evil acts humans are capable of. In contrast I had seen the magnanimity of the human spirit. It seems to me as those that had been inflicted with these wounds had filled those wounds with courage. The deeper the wound, the great their capacity for courage.”

Similarly for Simon Campbell-Skelling: “There are many things that will stay with me from this visit but one that I find especially striking is how lacking in bitterness or a desire for revenge the Bosnians are. They would have every right to wish for the most terrible retribution against the Bosnian Serbs, but I never got this feeling from anyone I met – even from people who had fought against them or lost loved ones. All they want is fair justice and a chance to make Bosnia into a united and prosperous member of Europe.”

Elizabeth Wilson meanwhile “rapidly became aware of the sheer strength of these individuals who refuse to let their pain consume them. Instead, working together, they do everything they can to make sure lessons from the past are being learned, maintaining optimism for the future.  Those individuals are the most inspiring souls I have ever met and their stories and sentiments deserve to be heard by everyone.”

For Imran Hamid the whole trip was “an emotionally intense visit to a beautiful country in the heart of Europe. Clearly still healing from the chaos, misery and injustices of war and genocide. Meeting our Mothers of Srebrenica and feeling a fraction of their pain and sorrow 20 years later was particularly difficult, but their fortitude, compassion and message of hope was truly humbling.”

Echoing this were these thoughts from Rizwan Hussein: “I was extremely moved by the victims of war, by their strength, belief in their faith and the ability to wipe away resentment and animosity towards those who committed these crimes. Humanity gives me hope.”

The need to return to the UK, and to try different strategies to make a positive change was another key theme. Seema in particular now feels it her “duty that I make people in the UK aware of these stages (of genocide) to prevent something like this happening in the UK or anywhere in the world”. The activities of the Mothers were of particular interest to her, and she says: “Seeing the ways they organise and the avenues they use to bring about change, made me change my views and rethink on strategies on how I can bring that back to the UK.”

Elizabeth reiterated this, revealing that “the experience has provided me with great insight into the importance of interfaith and community networks”. Sam Barrett meanwhile noted: “The opportunity to engage with people who were directly involved with such an important part of European history was unique and one that would be worthwhile to any citizen interested in developing community spirit and togetherness.”

As with delegations that have gone before them, many of the young leaders felt that the experience had changed them in some way. Sam revealed that: “I feel that I have grown as a person having witnessed such atrocities and suffering amid the beauty and compassion of the Bosnian people, their tenacity is testament to the strength of will to improve their situation by embracing peace and love.”

Lessons from Srebrenica is an education programme and learning was a big part of the experience for all involved. Sam again felt that “it is important to learn from the past so that these events are not repeated again. Former Yugoslavia shows us that it is possible for conflict to break out in any country and that crimes against humanity and genocide cannot be allowed to happen again.” Imran felt that the visit was “a reminder that justice must prevail before reconciliation can flourish and that humanity must strive for peace and fraternity through dialogue, fighting to banish the demon of conflict while standing firm against inequity”. Jerri Butler came away feeling “honoured to support the mothers of Srebrenica to tackle hatred and intolerance in my own community, to ensure victims are never forgotten and such acts of genocide are not part of our future”.

Both Rizwan and Jack Welch reflected on the international community and its role. Jack found that the visit, “really did make me evaluate my thinking on when the international community need to intervene in these kinds of situations – where Bosnia was a clear case in which its course of events could have been very different had something been done.”  Rizwan meanwhile highlighted that: “It’s highly alarming that lessons are not being taken away from something so recent and fresh. The perpetrators of similar conflicts taking place today ignore the devastating example of the events that occurred in the Balkans less than 20 years ago, and the subsequent consequences that are still felt in the region.”

The visit was the seventh delegation to have visited the country with Remembering Srebrenica. A number more visits are planned for the coming months, and over a two-year period, the charity aims to send 750 delegates on its Lessons from Srebrenica programme.