Remembering Srebrenica teams up with NHS for debut Symposium

The first ever event of its kind, ‘NHS Symposium on Addressing the Trauma of Sexual Violence’, in partnership with Remembering Srebrenica was held by Birmingham and Solihull Mental Health Foundation Trust (BSMHFT) to deliver a truly unique and thought-provoking afternoon. 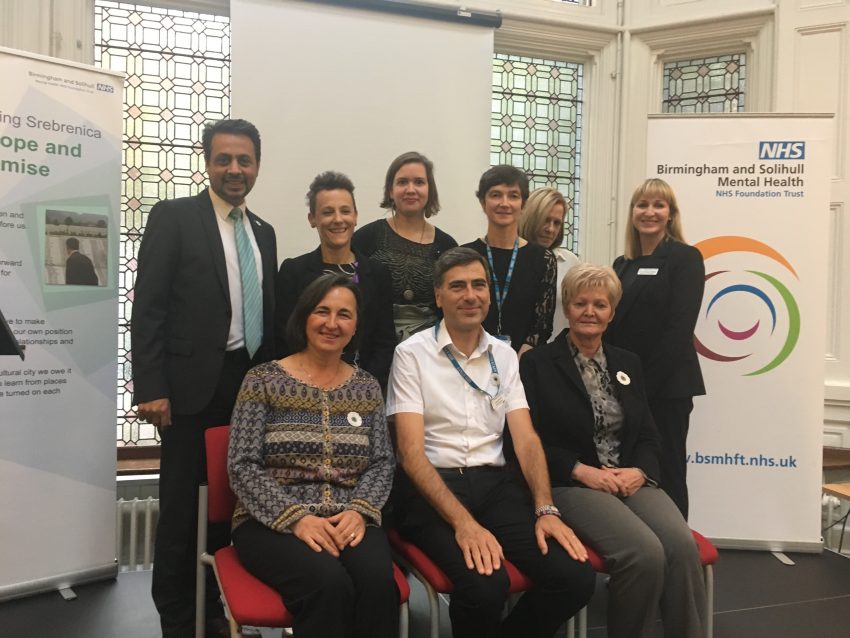 The first ever event of its kind, ‘NHS Symposium on Addressing the Trauma of Sexual Violence’, in partnership with Remembering Srebrenica was held by Birmingham and Solihull Mental Health Foundation Trust (BSMHFT) to deliver a truly unique and thought-provoking afternoon. Remembering Srebrenica is a national charitable initiative funded by the UK government. The initiative seeks to learn the lessons from the 1995 Srebrenica genocide, the worst atrocity on European soil since the Second World War to help tackle hatred intolerance and build cohesive communities.  This unique partnership, thanks to the leadership of BSMHFT Chief Executive, John Short, brought the lessons from Srebrenica to an NHS setting for the first time in the UK.

The symposium explored what communities in the UK can learn from the experiences of survivors of sexual violence in Bosnia. The Trust caters to a richly diverse community in Birmingham, so the event explored how trauma caused by sexual violence in different contexts, such as war and domestic violence, can be treated.

Early in the symposium the audience learned a sobering statistic: statistically every six minutes a woman in the UK is sexually assaulted. It is crucial then that communities in the UK listen and learn from genocidal rape survivors from Bosnia. This is not something that happens ‘elsewhere’, it is happening right here and now.

The event drew on the experiences and testimony of two truly inspiring and courageous women from Bosnia-Herzegovina:  Bakira Hasečić and Dr. Branka Antić-Štauber. Bakira is a genocidal rape survivor who has dedicated her life since the genocide to tirelessly strive for justice for victims of sexual violence in Bosnia. As the President of Women Victims of War, Bakira is a beacon of hope and resistance against those who wish to silence sexual violence survivors.

Bakira gave harrowing testimony of her experience of sexual violence during the war and the genocidal campaign committed against Bosnian Muslims. Speaking about her pursuit for justice, she said:

‘Revenge is not necessary, instead it’s important to fight against impunity.’

She went on to discuss her crucial work providing statements from victims to help secure prosecutions and bring perpetrators to justice. Her strength and defiance was summed up in her statement: ‘Today, I am proud to say that I survived.’

Bakira was followed by a powerful speech from Dr. Branka Antić-Štauber, the President of Snaga Žene (Strength of Women). She treats victims of trauma and works with survivors of sexual violence to ensure they get the psychological, physical, social and economic support they need to rebuild their lives.

Dr Branka spoke about how her work over the past two decades has helped women who she found in a ‘frozen state of being’ due to the trauma caused by their experiences. Dr Branka’s uses a holistic model catered to the individual to ensure that survivors get the psychological, social, medical and economic help that they need to live their lives. One treatment method uses a ‘valley of flowers’ which utilises the healing power of colour therapy and plants to help women deal with their trauma. Dr Branka said that by giving women the resources to help heal their trauma:

‘Women are able to fight for their rights.’

John Short, CEO of BSMHFT and Remembering Srebrenica Community Champion, gave a moving presentation on the effect his ‘Lessons from Srebrenica’ visit with the charity and subsequent support of our work. He stressed the importance of the Symposium for helping us to realise that we need to face up to what happens in own communities, stating that ‘sexual violence is hidden because we haven’t got memorials and graves […] this is a very alive issue.”

The MP and former Secretary of State for International Development Andrew Mitchell offered a message of support for the event and stressed that ‘Taking action must be the priority for us all.’

The audience also heard from Dr Waqar Azmi OBE, Chairman of Remembering Srebrenica. Dr Azmi explained that, ‘The root of these crimes is the dehumanisation of others. We must address sexism, misogyny and violence against women and girls.’ He pointed out that Birmingham’s Bosnian population reflects the diversity of the city, meaning that treatment of survivors must consider the variety of contexts sexual violence occurs in, from war to domestic violence.

The Symposium was a powerful example of partnership working and developing innovative approaches and learning for the betterment of both service users and employees of BSMHFT.

Nov 16, 2017Amil Khan
MAKE A DONATION
Remembering Srebrenica remains committed to honouring the victims and survivors of the genocide.