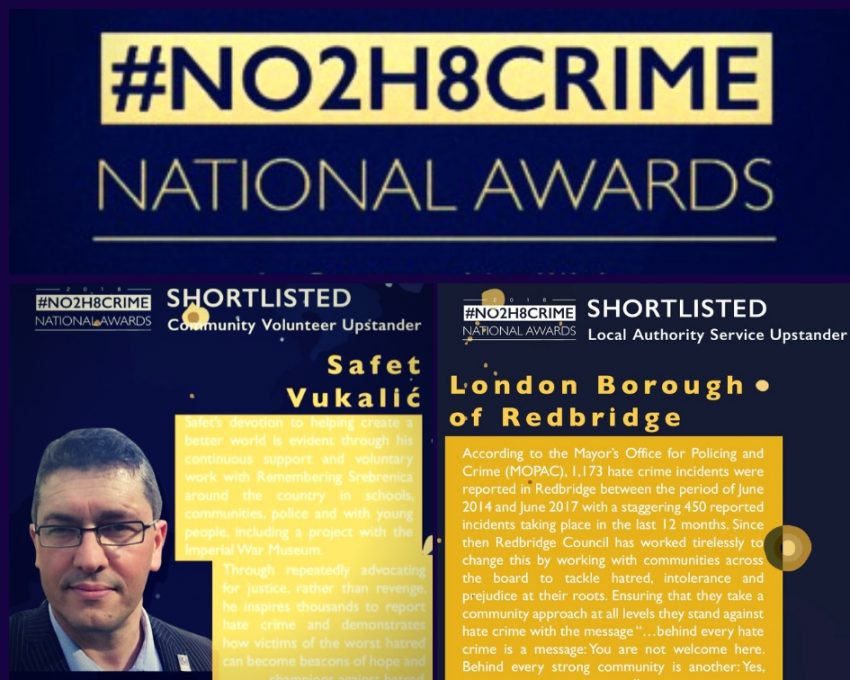 Two of Remembering Srebrenica’s partners, Safet Vukalić and Redbridge Council, have been shortlisted for two No2H8Crime awards in recognition of their efforts to challenge hatred.

Safet Vukalić is a survivor of the Bosnian Genocide and ethnic cleansing. He was born in 1976 in the city of Prijedor, North West Bosnia and lived a normal life in what was a multi-ethnic Yugoslavia. At the age of 16, he narrowly escaped being captured, interrogated and imprisoned in a concentration camp. Unfortunately, his father and brother over the course of several months were imprisoned in four separate concentration camps simply because of their Islamic faith. He, like all other non-Serbs, were forced to wear white armbands prior to leaving their homes and fly white sheets from their houses in order to be identified as Muslims and provide the opportunity for crimes of hatred to be committed against him. Safet eventually arrived in the UK in December 1993 after surviving two years of hell on earth. Safet is a survivor of the most extreme forms of hatred which ultimately resulted in genocide and now shares his harrowing story in order to educate on the consequences of hate.

Safet’s devotion to helping create a better world is evident through his continuous support and voluntary work with Remembering Srebrenica in schools, communities, police and with young people. By repeatedly advocating for justice, rather than revenge, he inspires thousands to report hate crime and demonstrates how victims of the worst hatred can become beacons of hope and champions against hatred.

Safet has worked with Remembering Srebrenica since 2015 and shared his testimony at the Northern Ireland’s national commemoration for the 23rd anniversary of the Srebrenica genocide in July this year.

Remembering Srebrenica has worked closely with Redbridge London Borough Council to help them in implementing an understanding of the impacts and consequences of hate crime and how, if left unchallenged, hate has led to ethnic cleansing and genocide. This year they held a commemoration event to remember the victims of the 1995 Srebrenica genocide, the worst atrocity on European soil since World War II and to unite communities in a collective act of remembrance.

Redbridge is one of the most ethnically diverse local authorities in the UK. According to the 2011 census over 65.5% identified as belonging to an ethnic group other than white British. It also has the highest proportion of Pakistani residents of any London borough and showed notable ethnic and religious population mobility within the area. According to the Mayor’s Office for Policing and Crime (MOPAC), 1,173 hate crime incidents were reported in Redbridge between the period of June 2014 and June 2017, with a staggering 450 reported incidents taking place in the last 12 months of the data set.

Since then Redbridge council has worked tirelessly to change this by working with communities across the entity to tackle hatred, intolerance and prejudice at its roots. One of the ways Redbridge Council has promoted community cohesion is by commemorating the Srebrenica genocide.

The council have integrated anti-hate crime initiatives into the very centre of the work they do highlighting that when left unchallenged hate crime can manifest into the most heinous of crimes including genocide. By remembering the lives lost and working closely with the community, especially those that have been affected by hate crime, they send a clear message that Redbridge does not tolerate hate.

Sep 7, 2018Amil Khan
MAKE A DONATION
Remembering Srebrenica remains committed to honouring the victims and survivors of the genocide.