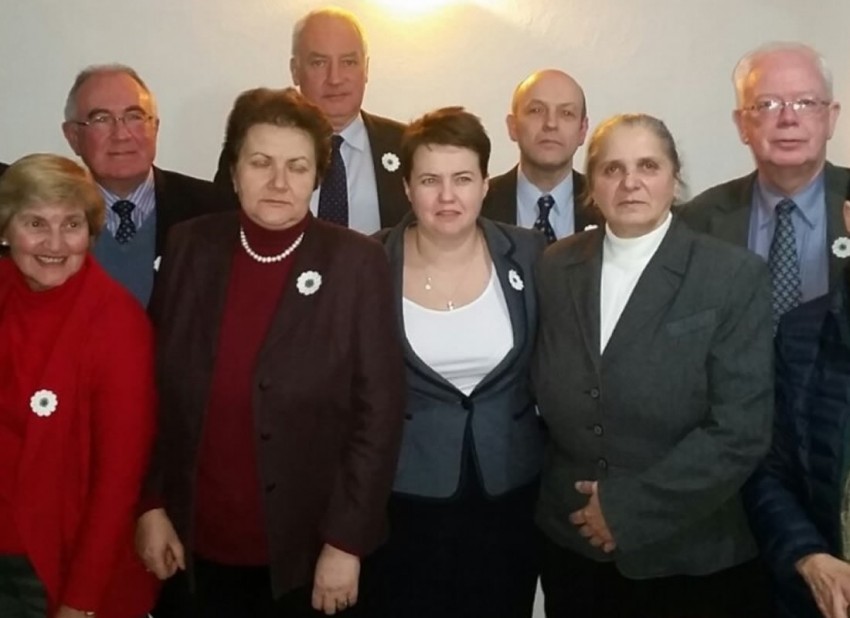 The visitors were taking part in a Lessons from Srebrenica visit and listened as the women recounted their experiences of the massacre, which saw more than 8,000 men and boys – mostly Muslims – murdered by Bosnian Serbs in July 1995.

Hajra Ćatić told the group: “I lost my husband and son. Both my brothers lost their sons. We tried to seek shelter with the UN forces, but the Serbs took men and killed them brutally in the street. Many joined the march to Tuzla but did not reach the free territory, including my son. I found my husband in a mass grave and buried him in 2008. I’m still trying to find my son’s remains.”

Upwards of 10,000 men and boys set out on a desperate and perilous 63-mile trek across hills and forests to reach the nearest Muslim territory at Tuzla. Only 3,000 survived.

Hatidža Mehmedović lost two sons and her husband. “The Serbs kept fathers and sons together waiting to be killed. Many of us will never see the joy and happiness of family because evil people removed joy from our hearts. I would not wish this life on anyone.

“I buried just two shin bones of my older son; many mothers have died without finding the truth. Truth is better than lies, which lead to bloodshed. Only justice and truth can lead to a better and brighter future. We must learn the lessons of the past so that we can warn other people. We pray that this will never happen to anyone else.”

Suhra Sinanović lost 23 members of her family – including her husband – and the mother-of-two was left alone with her son and daughter, now training to be a doctor and an engineer.

“I took my kids to the first mass grave to show them what was done by our neighbours,” she said. My daughter does not remember her father. I will keep telling the story of what happened – it cannot be forgotten or forgiven.”

“Last year, I buried my youngest son. I only found two little bones and was told not to bury them, but I wanted to mark his name. I’m proud of the kids who survived and became doctors, teachers and professors without asking for revenge – we are proud there is no hatred in them.”

Organised by Remembering Srebrenica, the visit was led by The Very Rev. Dr. Lorna Hood, former Moderator of the General Assembly of the Church of Scotland.

The group included Ruth Davidson MSP, Leader of the Scottish Conservatives and The Rt Hon. the Lord Wallace of Tankerness QC Jim Wallace, HM Advocate General for Scotland and Deputy Leader of the House of Lords.

Delegates visited the Srebrenica-Potočari Memorial Complex, where many victims of the 1995 genocide are buried, as well as visiting the International Commission on Missing Persons (ICMP) in Sarajevo and Tuzla.

“The courage and determination of the mothers is what hits you,” said Ruth Davidson. “They aren’t bitter, they don’t want revenge. They just want people to know what happened here.

“The barbarity is shocking; seeming inhuman and it is told so matter-of-factly. The memorial is staffed by survivors of the ‘death march’ and the families who perished. Srebrenica’s story is their story too; it is the story of their friends, their brother, their husband, their son.

“No-one who comes here can go away unaffected. This is Europe’s shame and the only way we can learn is to keep the story alive, ensuring people never forget what happened here.”

Lord Wallace said that the visit had been profoundly moving – particularly listening to the Mothers and visiting the ICMP, whose staff’s dedication, determination and skill showed it was possible for good deeds and compassion to come out of evil.

“No matter how much you read about Srebrenica and the events of July 1995, hearing the Mothers’ testimony at first hand brings home the reality and scale of the evil perpetrated here,” he said. “It was not only the agony of these days, but the years of waiting for their loved ones to be identified.

“What struck home was the absence of any call for revenge, and their courage in reliving these events, as they related their experiences.”

For Lorna Hood, it was her second visit to Srebrenica to meet the Mothers’ and no less moving for her than the experience last year.

“Our meeting with the Mothers was just as poignant and painful as it was before,” she said.

“You cannot help be inspired by their courage and tenacity but also humbled by their lack of malice or desire for revenge.

“Genocide seems unthinkable between those who had been neighbours. However, the fact that it happened there is a sober reminder that it can happen anywhere, unless we learn to respect and appreciate our differences along with our common humanity whether we are of one faith or no faith.

Feb 27, 2015francesca cleverly
MAKE A DONATION
Remembering Srebrenica remains committed to honouring the victims and survivors of the genocide.

SIGN UP
February 27, 2015 NewsScotland
Organise a memorial eventBecome a Volunteer

There's a fascinating session on how journalists covered the siege in Sarajevo being held on Friday - 6pm in the UK and 7pm in Europe. Do consider signing up. https://t.co/7n9LV9doyF

Six candles for six million Jews killed in Holocaust: Victims of the Bosnian genocide mark the International Holocaust Remembrance Day at the @SrebrenicaMC.