Survivors of the Srebrenica genocide tell their story in a new documentary which gets its first-ever showing in Sarajevo on the day dedicated to remembering those who perished in the atrocity. 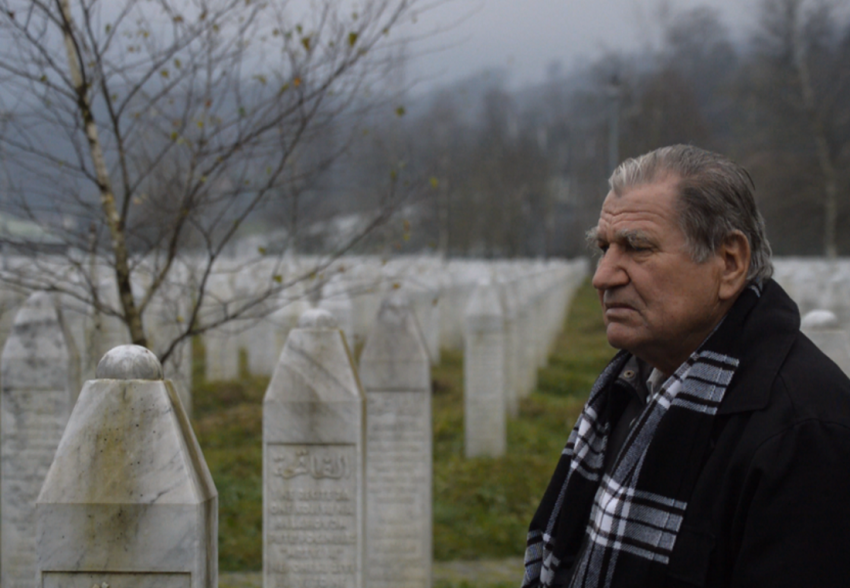 ‘Srebrenica Survivors’ is a new 60-minute film by Edinburgh-based film-maker Samir Mehanović.  It portrays  the long-term impact of the genocide through a series of interviews with men and women, whose lives were altered for ever during those days.

The film gets its first private screening at My Face, Vilsonovo Setaliste 8, Sarajevo, on 11 July – the EU-wide Srebrenica Memorial Day. This year marks the 20th anniversary of the genocide, which saw 8,372 Bosnian men and boys were killed within a week.

The film tells the story of the extraordinary men and women who survived the genocide. The film raises serious and profound questions about the nature of human existence, war, and forgiveness.  It also tackles the failure of the international community to protect innocent civilians and offer justice to victims of war crimes.

Among those interviewed are Hatidza Mehmedović, who with other civilians tried to find protection in the UN base at Potocari, only to find that Serbian troops led by Ratko Mladić had taken over from the Dutch UN battalion, and had begun days of killing and torture. Hatidza lost her husband, two sons, and more than 200 of her extended family.  She was one of the Mothers who visited the UK to participate in commemoration events organised by Remembering Srebrenica during Memorial Week in 2014.

Other interviewees include Mehmed Hodzić, pictured, who lost more than 67 relatives including his son and brother, and now survives with his wife and daughter on a pension of £120 a month; Zinahida, who was only 13 when she lost her five brothers and both parents, and is still on anti-depressants today, unable to forgive the Dutch UN troops who failed to protect the Srebrenica enclave; and Ahmed, who was 20 when he had to take the 5-day march through the woods with 10,000 other men, most of whom did not survive.

We also meet EK, who chooses to remain anonymous because she is one of many women who were raped and tortured during Bosnian war; many of her former neighbours who raped her are still at liberty, and some are members of the police force in the Bosnian Serb entity Republika Srpska.

I was raised in Tuzla, 40 miles from Srebrenica,” . “I remember when the endless rows of buses with refugees from Srebrenica arrived, with women and young children.  Where were the men?  Tuzla was strangely quiet at first; and then out of that silence, the monstrous stories of killing and rape began to emerge.

“When I first visited the Srebrenica memorial in Potocari in 2014, and saw the mass graveyard there on the site of the former UN base, I was struck and deeply moved when I saw the same family names repeated endlessly on the marble memorial.  It seemed like a lonely testament in this vast place, with too many headstones, and too many young deaths recorded.”

The film also features music by Scottish composer Nigel Osborne, who has worked extensively in former Yugoslavia both during and since the war.

It is produced by Samir Mehanović’s company Paradiso Films, with the support of Executive Producer Allan Marson, associate producer George Kerevan MP and in co-production with Bosnian independent television company FACE HD TV, which will host the premier of the film in Sarajevo.  Following its Sarajevo screening and appearance on BBC World and BBC Newsnight, Srebrenica Survivors will also have a limited cinema release in the UK.

Samir Mehanović is a BAFTA-winning film-maker, born in Tuzla, Bosnia in 1969.  He escaped from Bosnia to the UK in 1995, at the end of the war in former Yugoslavia, and made his home in Edinburgh.  He is now a British citizen.

His films include The Way We Played, a feature film about two young boys whose childhood is interrupted by the outbreak of war in former Yugoslavia, Anant, a short feature about a boy who makes his living picking coal at a vast open-cast mine near Dhanbad in India, and a recent short documentary, made in collaboration  with Edinburgh Direct Aid, about the plight of teenage girls living in Syrian refugee camps in Lebanon, who are losing their education because of the catastrophe of civil war.

Jun 24, 2015Amil Khan
MAKE A DONATION
Remembering Srebrenica remains committed to honouring the victims and survivors of the genocide.