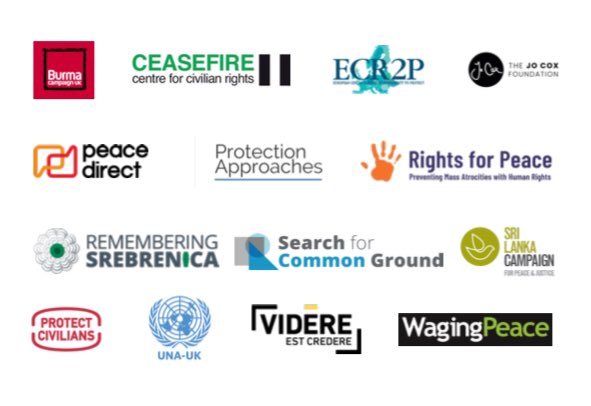 Read the full text of the letter below:

We write as members of the UK Civil Society Atrocity Prevention Working Group and as representatives of organisations that work, in many different ways, to reduce the risks of mass atrocities worldwide. We write to ask each of you to make a clear commitment to preventing atrocity crimes in your party manifesto and during this election campaign.

Genocide, war crimes, ethnic cleansing and crimes against humanity diminish us all. They carry an untold cost of human suffering and can often be predicted and prevented. They can also affect the UK’s own security and prosperity through international instability and the threat of terrorism.

In July 2019, Her Majesty’s Government set out for the first-time a cross-cutting national approach to preventing mass atrocities, making clear that the responsibility lies across the Department for International Development as well as the Foreign Office and Ministry of Justice. The approach recognises that British atrocity prevention cannot be restricted to crisis response.

Preventing identity-based violence and mass atrocities is a matter that begins at home and extends around the world. It requires participation from all internationally-facing departments as well as from domestic institutions that are responsible for upholding obligations to populations within and at Britain’s borders.

We therefore recommend that all parties during this important general election;

• Support a feasibility assessment of a cross-departmental prevention analysis unit

• Pledge to integrate an explicit commitment on the prevention of identity-based violence from discrimination to violent extremism and mass atrocities. This commitment would cut across portfolios and bureaus of policy interests, including international development, communities and local government, justice, trade, foreign policy, and migration and refugee issues

Preventing atrocities is a matter of conscience, not partisanship. It is a responsibility that is shared, and an agenda that should be prioritised by all political parties; it is a commitment that can never belong to one party or another.

We call on you to commit in the lead up to the 2019 general election, and irrespective of its outcome, to prioritise the prevention of atrocity crimes, not only as a matter of strategic national interest, but as a goal that reflects the UK’s internationalist values.

Nov 29, 2019francesca cleverly
MAKE A DONATION
Remembering Srebrenica remains committed to honouring the victims and survivors of the genocide.

SIGN UP
November 29, 2019 News
On Air with West Yorkshire's Branch FMFormer war crimes investigator's book covers his work at The Hague in the 1990s