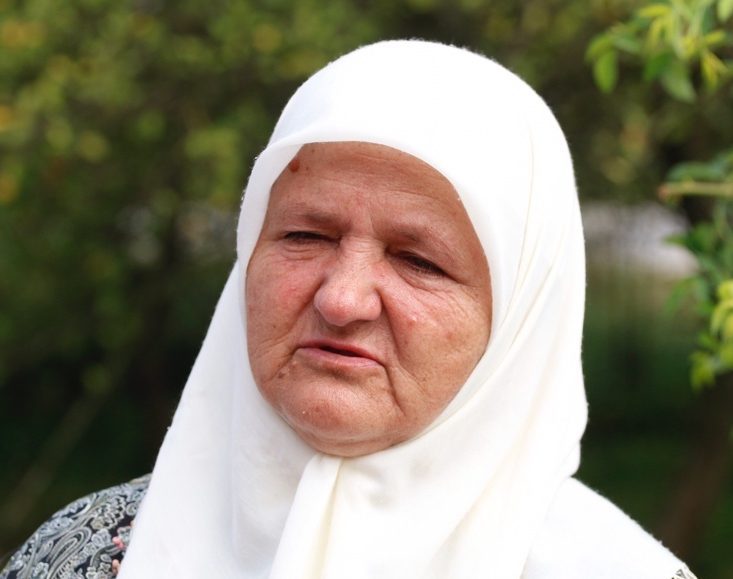 Ramiza is a member of the Movement of Mothers of Srebrenica and Žepa Enclaves. She recalls those days in Srebrenica like they were hell on earth, where people were killing themselves trying to escape what was coming. She lost her husband, 2 sons and 33 members of her family.

Several years later, Ramiza and her only surviving child were evicted from their house in the town of Visoko, near Sarajevo, following forced evictions as per the Dayton Agreement to allow displaced victims to return to their hometowns. She would have returned to Srebrenica in her own time and on her own terms had it not been for the fact that some of the same Serbs who killed her relatives were now in positions of power, and free to taunt her. Remarkably, she doesn’t seek revenge, but is motivated by the pursuit of justice, even though she knows it will not bring her family back. Below she retells her story.

My husband Junuz was 42 when he was killed. My sons Mustafa and Mehrudin were just 2 out of over 8,000 men and boys who were brutally killed in Srebrenica in 1995. 24 years have passed since their deaths. Mustafa was buried in 2005, Junuz in 2009 and Mehrudin 2010, but the memories of what happened – the screams, the shots and most unbearable of all, the terrified pleading eyes of my son Mustafa – will continue to haunt me for the rest of my life.

My last sight of Mustafa came as I was being driven from Srebrenica by bus. I saw a cowering group of prisoners by the roadside under armed guard. They were part of the column of men and boys who had tried to escape through the woods. As the bus passed, a Bosnian Serb soldier shouted out to the women “Recognise your sons and husbands. This will be the last time you see them”. I looked up and saw that one of them was Mustafa. We made eye contact and then he bowed his head. It was the last time I saw him alive.

I do not know what happened to Mehrudin. As for my husband Junuz, he was seen with a group of 1,000 captured men and boys who were herded into a warehouse and slaughtered. All of them were so gentle and kind-hearted. There isn’t a day that goes by where I don’t think about them. I still go to bed with pain and wake up with sadness.

I could tell you about all of the horrors that I witnessed there with my own eyes. I saw a pregnant woman slaughtered. I saw a young boy who must have been only about 10 years old decapitated by a Serbian soldier in front of my own eyes.

The horrors that I have had to endure in life haven’t stopped. They continue to this very day. As a member of the Mothers of Srebrenica Association, we have been campaigning for justice every single day for the last two decades. We have never sought vengeance, and we have never acted with hatred, because hatred is a sign of weakness which we refuse to succumb to. All we have ever asked for is justice and truth.

Yet here I am 24 years later, having lost my loved ones, whilst the perpetrators of these crimes walk free and get to talk and see their family. Where is the justice in that? We live among people who know where our children are buried, but they refuse to tell us. We have politicians who feel no shame in making statements in public that deny that a genocide was committed.

We will never stop fighting for truth and justice. As we women grow older, we feel the weight of responsibility on our shoulders to ensure that our stories, and the stories of our loved ones are heard and remembered, and that when we are gone, others will continue to fight for justice. I ask all of you to help us with this fight.

I stand shoulder to shoulder with you in confronting hate and intolerance as we know more than anyone else what hatred can lead to if it is allowed to flourish unchecked.

Jul 31, 2019francesca cleverly
MAKE A DONATION
Remembering Srebrenica remains committed to honouring the victims and survivors of the genocide.