“Justice”, but still no reckoning 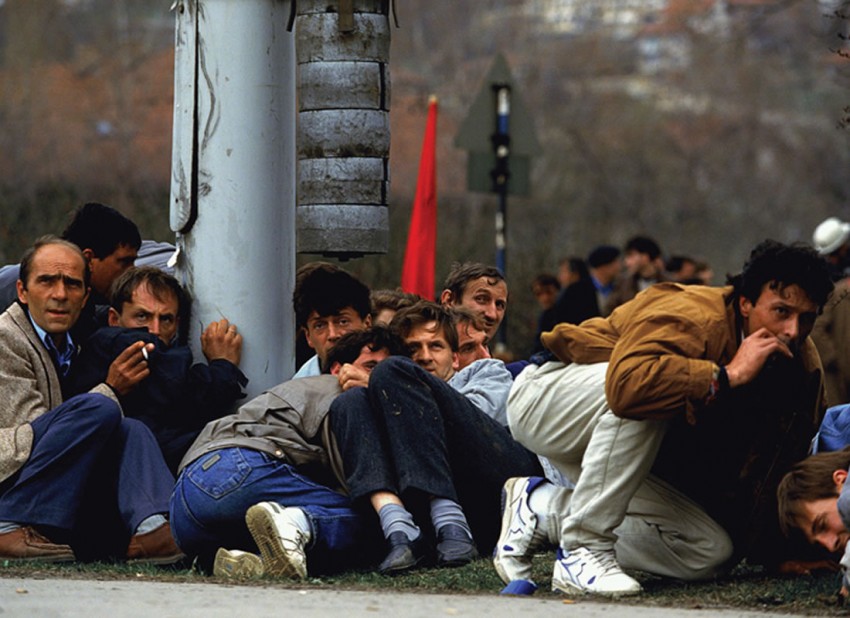 This is an opinion piece by award-winning journalist Ed Vulliamy, who reported extensively on the war in Bosnia for The Guardian. It was written shortly after Radovan Karadžic’s trial finished in The Hague.

In August 1992, journalist Ed Vulliamy met Radovan Karadžic shortly before discovering the horrors of the Omarska concentration camp and revealing them to the world. He continued to report throughout the war, and went on to testify in a number of trials at the International Criminal Tribunal for the Former Yugoslavia (ICTY), including that of Radovan Karadžic, former President of what is now the Republika Srpska throughout the war and Supreme Commander of the armed forces.

The sentencing of Karadžic for crimes including ordering the Srebrenica genocide has been greeted as a cause of satisfaction by many. But what about all the other preceding massacres? When will we see justice dispensed for them?

There was celebration and affirmation when Karadžic was sentenced: forty years ‑ which makes it unlikely he will see a day of freedom, even if the sentence is reduced – including a conviction for genocide for his ordering of the massacre of eight thousand men and boys at Srebrenica in 1995.

The headlines, the human rights industry, those who advance the cause of “international justice” and the liberal world generally were delighted. The international justice counsel for Human Rights Watch, Param-Preet Singh, summed up the mood: “Victims and their families have waited for over two decades to see Karadžic’s day of reckoning,” he said “The Karadžic verdict sends a powerful signal that those who order atrocities cannot simply wait out justice.”

There was one major problem with all this: since the verdict, I have spoken to scores of people who have survived or been bereaved by (usually both) the violence of which Karadžic was convicted, and not one of them shares this satisfaction. Not back in Bosnia, or in the scattered, shattered diaspora of those thrown around the world by – in the phrase Karadžic himself invented ‑ “ethnic cleansing”. Therefore, nor can I.

There are two words that matter in this discourse: one is “genocide”, of which Karadžic was convicted for Srebrenica, and the other is “reckoning”, which Mr Singh of HRW (and many others) deem now to have occurred.

Genocide is a kind of gold standard in “international justice”; if this were a sport (and you sometimes wonder) this is the trophy or medal you have to win. Karadžic’s conviction for genocide at Srebrenica told us something we knew already about the massacre – others have been similarly convicted – adding, of course, that he ordered it. This is fine. But what about the three long, bloody years in Bosnia that followed the first hurricane of violence in 1992, and led to – culminated in – the Srebrenica massacre of 1995?

Three years before Srebrenica, in spring and summer 1992, Karadžic’s people – on his orders, this is not contested by the sentence ‑ cut a swathe across eastern Bosnia, killing or expelling anyone non-Serb (mainly Bosnian Muslims) from their towns and villages. In Višegrad, Milan Lukić organised death squads which butchered people on a famous bridge and crammed them in locked houses where they were burned alive. He also arranged for the establishment of a rape camp at a spa called Vilna Vlas, where women and girls were kept for violation all night every night. No Muslim remained in Višegrad when the war was ended in 1995. Yet what happened in Višegrad is not genocide.

Over in the west of the country, over those three long years that we tried to report the Bosnian war, the same horrors were meted out under Karadžic’s authority and on his command ‑ this is affirmed by the judgement. The area around the town of Prijedor contains more mass graves than any part of the country except Srebrenica – most of those in them slaughtered in or around the camps we found that day, August 5th, 1992. Just last year, yet another, containing 596 bodies, was found at a place called Tomasiča, giving up its skulls, bones, and fleshy tissue preserved by mud. Whole towns and villages were razed: Kozarac, Kamenica, Kevljani – and others (Sanski Most, Kljuć etc.), cleared entirely of Muslims and Croats.

I could go on. And on … and that is without beginning to count the thousands of villages that were “ethnically cleansed” between 1992 and 1995. In all of these places, mosques, libraries, any trace of Muslim or Catholic culture were destroyed: a cultural branch of law on genocide about which its authors were very specific makes it clear that to eradicate the history and culture of a people is genocide. Karadžic’s position atop the chain of command of the organisms carrying out these atrocities was affirmed by last week’s judgement, yet according to it, none of this was genocide.

It is trivial to contest the judgements of the ICTY. That is what those who endorse and support the war criminals, while denying their crimes, do. No genocide until Srebrenica: if that’s the sentence, let it go. What concerns me is the impact of this denial of genocide by the ICTY (as well as the revisionists) on those who survived and are bereaved by those three years of hyper-violence. The truth is that most of them gave up on “international justice” long ago. All this has taken too long; the tribunal lawyers and UN bureaucrats have made too much money out of their suffering to be taken seriously. The refugees, when they come to testify and gather in the witness rooms in The Hague, tend to be poor – and most of them, like most refugees, will remain so. These people are not stupid, far from it, and it is interesting that when they do talk about the ICTY, they speak not so much about the cases, but the fortunes amassed by others in their name. Those people have lost interest in the industry of “international justice” and like my friend Edin Kararič, who survived Omarska, barely noticed the Karadžic verdict.

But others still care, and feel wounded. “I don’t think anyone’s feeling anything other than depressed by it all,” said my friend Victoria Amina Dautović, the first baby born to Bosnian refugees in Britain, in December 1992, with whom I spoke four times on the day of the Karadžic sentence. Her parents survived the camps – she was in utero in Trnopolje. And this is where Mr Singh’s word “reckoning” comes in (it is unfair to pick on just him and HRW – thousands more say the same thing – but they epitomise the general satisfaction). “Reckoning” is a big word. It goes beyond “justice”. It is a deeper, more painful thing than “reconciliation”, a term which gets thrown around by politicians and human rights advocates like an advertising slogan.

Reckoning means confronting what happened, cheek-by-jowl. Reckoning means coming to terms with atrocity, and understanding not only who did it, but why and at what cost. Reckoning is a precondition not only to truth, but to a true history of events. There can be no “reconciliation” until there is reckoning, and not really any peace that deserves the name. Reckoning means the perpetrators looking in the mirror, and admitting what they did – not for punishment’s sake, but for the historical liberation of the survivors and bereaved. Above all, reckoning means giving those who have survived and been bereaved by atrocity back the history of what happened.

There has been no reckoning for the survivors and bereaved of Bosnia, nor can the Karadžic verdict do anything towards one. And to pretend otherwise only serves to emphasise the abyss between the human rights and “international justice” industries and the people they claim to serve.

To add insult to injury with regard to those three lost years in the chronicle of genocide, the same tribunal that acquitted Karadžic on that crucial tenth count proceeded to acquit the Serbian extreme nationalist leader Vojslav Šešilj – a passionate supporter of all that was done by his kinsmen in Bosnia, and allegedly deeply involved in its execution ‑ on all charges. The ICTY ruled that the numerous atrocities carried out by militias affiliated to the Serbian Radical Party of which Šešilj is leader – that is not contested ‑ had nothing to do with him. Again, there is no point in arguing – the acquittal is the point.

It also lets Serbia itself almost entirely off the hook. Šešilj’s acquittal follows President Milošević’s death while on trial, and the overturning on appeal of the conviction of Serbian general Momčilo Perišić, for involvement in Srebrenica and other atrocities. The UN’s tribunal has been extremely keen to keep Serbia and the Bosnian Serbs apart. When Bosnia was suing Serbia for genocide at the International Court of Justice down the road, the ICTY was careful to hear in camera, and legally seal, documents that clearly proved Serbia’s involvement in the Srebrenica massacre, and deny them to the ICJ.

I have been told many times, whether it is true or not, that it was because of our exposure of the camps that the ICTY was established in the first place. The creation of the ICTY did follow the discovery of the camps, and was supposed to be an act of both contrition and ambition: contrition by a UN which had failed so miserably on the ground in Bosnia, and ambition in the liberal zeitgeist of “human rights” and “international law”.

I was first approached in 1994 by a US Marine lawyer called Michael Keegan, prosecuting the tribunal’s first ever case, that of a parish-pump murderer, rapist and sadist who toured the camps, called Duško Tadić. I was enthusiastic, and agreed to testify in what was trumpeted as the first war crimes trial since Nuremberg, though Tadić was a minnow in the scheme of things. I’ve since testified in nine more trials, including those of Karadžic and Mladić. I’ve been accused of betraying the “neutrality” of my profession. I’ve been accused by the revisionists and politically-motivated defence lawyers of lying on oath. I’ve defended the tribunal against its critics and gave it a decent write-up in a book published as late as 2012.

I’m glad I met Karadžic that first time in Pale in 1992, because that meeting was en route to the camps – the discovery of which was an accursed honour, and I’d do that again; it may have saved a few lives, it made me precious, lifelong friends and taught me a lot about the world. But knowing what I know now about the ICTY, I wish I had said to Mr Keegan that day in 1994 that I had not the time nor confidence in his project to oblige him, wished him well and left it at that.