The granddaughter of holocaust survivors, student Hannah Gershon - pictured below, right - travelled to Bosnia-Herzegovina with Remembering Srebrenica as one of five people born in 1995 - the year that the Srebrenica genocide took place - as part of a documentary discovering more about the atrocity. Here, Hannah recounts her experience. 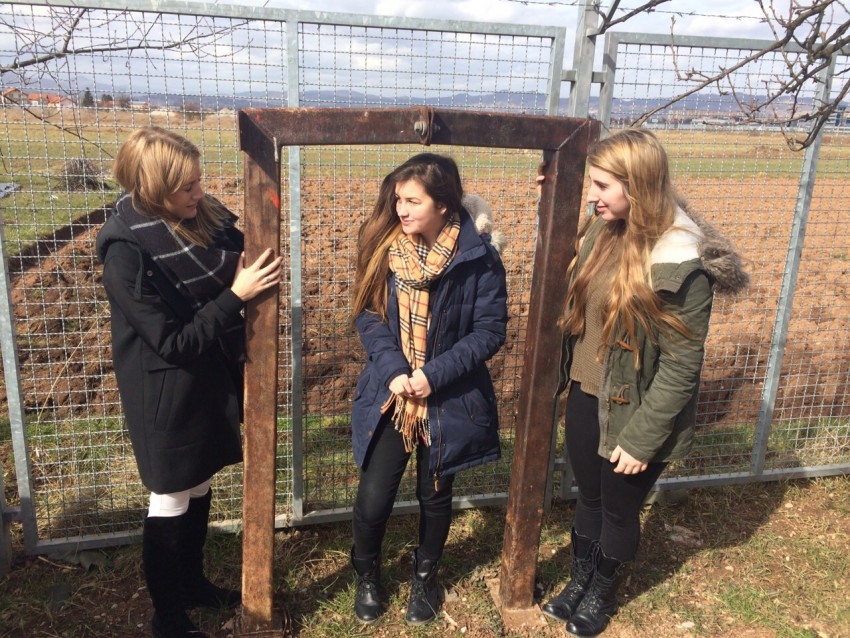 When I was young, I thought that pre 1960s, the whole world was in black and white  – because television was. I could not understand how grass became green and the sky blue. Being a gullible child with no reason to distrust or disbelieve my two older brothers, I believed them when they told me that one day, people from all over the world decided to colour in the world with crayons and paint. To a four year old, me this seemed a perfectly logical explanation for the sudden appearance of colour in film, television and photographs.

Being the granddaughter of holocaust survivors and those who sheltered children from the Kindertransport, I grew up listening to stories about the atrocities of the Second World War first hand or passed down from my parents; there were so many tales, some of which would be worthy of a film script.

My Grandmother, Gina Gerson (nee Bauer) originally from Vienna lost her entire family bar her half-sister Claire, who had left Austria earlier, escaped to Britain at the tender age of 12 with nothing; no money, no belongings, practically no family and not a single word of English to her repertoire. What she did have however were experiences and experiences are very hard to forget. Determined to play her part in trying to prevent the repeat of such terror ever again, she sought to educate people – by telling her life story of being a young Jewish girl growing up in a time where you were persecuted or murdered for something as simple as your religious beliefs. Dedicating her life to teaching people the value of tolerance, understanding and diversity, she retold her harrowing story in schools, books and articles – not for sympathy, but as an example of how what can start as a throw-away comment here and there, a drawing in a magazine or even a joke between friends can snowball into something much larger and much more sinister.

Growing up with a family history so intertwined and affected by genocide, from a young age I was aware of what had happened before and during the Second World War; I listened to stories, I was taken to museums and I was shown pictures, but still I could not grasp the reality of it.

These pictures were in black and white, my Grandma was old and to me, museums were meant for fossils and paintings from Tudor times! This happened seventy years ago, a child cannot comprehend what to them is such a massive number, such a long time ago. Seventy or seven hundred years ago – it was impossible for me to see that on a historical time line, this event was actually fairly recent, I was convinced that as a human race we were past this, judging somebody on their religion, country of origin, sexuality or beliefs was just wrong. This simple fact was to me, black and white; something like this could never happen again. My Grandma hoped that by educating young people, this would never happen again, but it did, four more times in her life-time.

Between 1.7 and 2 million Cambodians died in the Khmer Rouge’s “Killing Fields”, 800,000 men women and children perished in the Rwandan genocide, an estimated 100,000 lives were lost in Bosnia and 300,000 Darfuri civilians were murdered in 2003. Statistics and dates – numbers. But they are more than just numbers; every one was a husband, a wife, a father, a mother, a son and a daughter. Numbers and statistics such as these cannot be comprehended. They are almost impossible to fathom. Now as an adult, a number and date that I can comprehend and relate to is 20 and 1995: My age. My year of birth.

In February I was privileged to travel to Bosnia and Herzegovina with the charity Remembering Srebrenica, as one of five people born in 1995 – the year that the genocide took place – as part of a documentary discovering more about the Srebrenica genocide.

During my visit, we were given the chance to visit the Sarajevo tunnel, which was constructed during the Siege of Sarajevo, linking the neighbourhoods of Dobrinja and Butmir as a way of providing food, war supplies and humanitarian aid to the city. We heard stories first-hand of how our guide, Resad Trbonja and countless others ran, doubled over through the flooded tunnels only slightly higher than five feet and often waist deep in filthy water, with a 30 kilogram sack on their back. In Tuzla we were shown around the headquarters of the International Commission on Missing Persons (ICMP) and the Prodrinje Identification Project (PIP) – a forensic facility dedicated to providing DNA identification of the human remains of missing people as a result of armed conflicts, violations of human rights and natural disasters.

We travelled to Srebrenica, a town haunted by the single largest genocide in Europe since the Nazi regime. Before laying a wreath at the Potocari memorial, we met with the Mothers of Srebrenica, the most moving part of my trip. They spoke of the anguish of losing their entire families and how the Bosnian Serb soldiers responsible still taunt them to this very day, boasting of their pride in their actions. One particular comment that struck me was how, like countless other survivors, twenty years on, people are still receiving parts of the bodies of loved ones unearthed in newly discovered mass graves. In one case, only two fingers were recovered and returned to the mother. Two fingers. Two small bones. She was a wife, a mother and in her words she “did not give birth to a few bones, she gave birth to four beautiful babies”.

It is always said that a parent should never have to bury their children. What about when it is all four of your children? And what happens when there is nothing to bury apart from two bones? “I died the day my children died”, she told me.

We spent time in the Potocari Memorial Centre where we heard Hasan Hasanovic’s extraordinary tale of survival. It was here that I saw images of soldier brutality towards innocent civilians. Skeletal figures imprisoned behind barbed wire in concentration camps, sites of mass graves and horrifying footage of killings by firing squad. The victims – guilty of nothing other than their identity. I had seen these dehumanizing pictures before. I had seen pictures of homosexuals being beaten in the streets, the disabled shot on sight, political opposition thrown onto carts and driven away, Jewish businesses burned to the ground and distressing images of prisoners enslaved in concentration camps. Those pictures were in black and white. Those pictures were taken 70 years ago in the Second World War. Those people were Jews, political prisoners, Sinti and Roma, disabled and homosexual. Although practically identical in content, I was wrong; I had in fact not seen these pictures before. The pictures I was now seeing were in colour. Instead of Jews, they were Bosniaks (Bosnian Muslims) – they were shown to me not by a historian or by my elderly Grandma, but by a survivor in his late thirties. And instead of Germany and its surrounding countries, they were taken in Bosnia, not seventy years ago, but twenty, the year I was born.

How could this have happened again? A horrific time that I thought and hoped would stay consigned to black and white photographs, behind glass at a museum, only retold by history teachers.

Someone had not coloured in the black and white pictures from World War II with crayons and paint. We had not learnt from the past and this is how these images had come to be shown to a delegation of young students and a BBC camera crew, in colour, in 2015.

In Srebrenica alone, 8,372 men and boys were led away to their deaths, lined up and shot in batches, then buried in mass graves.

When we are exposed to stories of past conflicts and desperation, we always wonder what actions we would be willing to take in such surreal circumstances. Some of us say with confidence that we would like to think that we will be as courageous as Miep Gies and the Bielski Brothers. Some contemplate how we would be able to find the will to survive. Would we be Resad Trbonja running through underground tunnels risking suffocation to retrieve supplies? Would we feel it is our duty to join the resistance even if it meant possible injury or even death? Would we feel the desire to only defend our family in such an unstable era? If we were not the victims of such persecution, would we recognise the evil and defend those affected? Or would we buy into the propaganda and conform to herd mentality? These questions and answers are hypothetical. They concern only the past. We cannot really answer them. Nevertheless, it is fundamental that we learn from the past so as to keep it there. George Santayana once said, “Those who fail to learn from history are doomed to repeat it”.

There is however one question we can answer now in 2015.

What will we – everyone single one of us do to make sure that it does not happen again?

Jun 14, 2015Amil Khan
MAKE A DONATION
Remembering Srebrenica remains committed to honouring the victims and survivors of the genocide.

The Ground is Baklava@sommunism·
16h