Mark Viner co-ordinated the radiography team assisting the forensic investigations of mass graves in Bosnia for seven years. In that time he helped uncover vital evidence to convict those who perpetrated the atrocities in Srebrenica, but also developed techniques that would help in many other disasters across the world. He returned to Srebrenica to learn more about the context and the people in October 2016 and shares his story here. 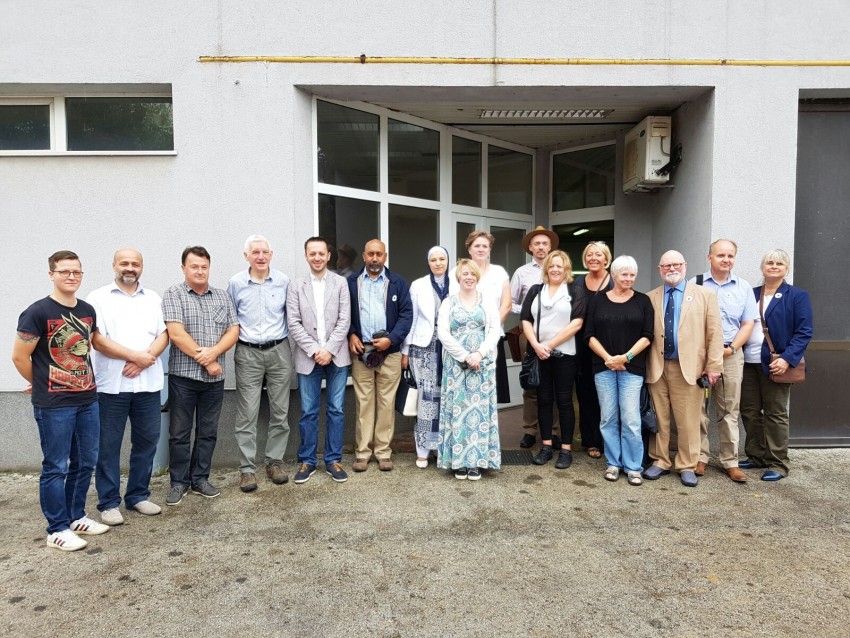 I remember watching scenes of the war in Bosnia on the TV in the early 1990’s. Like many, I cannot claim to have understood at the time what prompted such a vicious conflict in what had been until then a quiet corner of Europe, but I remember being appalled by the savagery of the events that were being reported.

I was contacted in August 1996 by a leading pathologist to ask if I could help recruit radiographers to assist the forensic teams working to investigate the genocide in the former Yugsolavia. I immediately said yes, not really knowing how that one word was to change my life. Over the next seven years I co-ordinated the radiography team; recruiting and scheduling over 50 radiographers from around the world to support the forensic pathology investigations. X-ray imaging technology was used to locate and retrieve bullets from exhumed bodies, document evidence of trauma and provide information that would subsequently allow the victims to be identified. I personally undertook over 14 “tours of duty” working in temporary mortuaries in Bosnia, Kosovo and Croatia alongside an international team of experts and investigators and by far the largest and most significant case that we investigated was the Srebrenica Massacre (as it was known, but now judged a genocide by international courts because of our work) involving over 8000 missing persons.

I remember my first experience of flying into Sarajevo, which at that time was only open to military and UN flights. We had been flown out from London to Zagreb by commercial flight and from there were flown on an old soviet transport plane across war-torn Bosnia to Sarajevo.  As we came slowly into land we could see the bombed out houses of those who had been “ethnically cleansed” sitting next to the untouched houses of their neighbours, and I wondered exactly what it was that could make friends and neighbours turn against one another in such a way.

At that time Sarajevo and much of Bosnia was a large military zone, with the white armoured cars and tanks of the UN forces patrolling the streets and vast no-go areas marked with signs saying “Danger – Mines” We continued our journey by road to the relatively safe town of Visoko where a temporary mortuary had been established to receive the remains of hundreds of victims that had been exhumed from mass graves. Whilst I had seen many dead bodies and victims of trauma in my career – the result of 15 years working in major London hospitals during several Irish terrorist campaigns – nothing had quite prepared me for investigating murders conducted on such an industrial scale.

We worked tirelessly, often for long hours, working with pathologists, anthropologists and investigators to examine the deceased with our x-ray machine, searching for and retrieving bullets, shell casings and other items of evidence that might be able to be used to establish a link to the perpetrators, recording and photographing the trauma inflicted by these weapons on the bones of the victims and giving voice to the pain that they had suffered. In the early days, the equipment that we had to use was sometimes faulty or not ideal for the task and evenings were spent repairing or modifying our tools to better undertake the work. 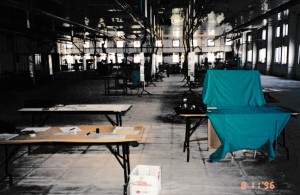 Evidence tables in the temporary mortuary

As forensic experts it is important that we examine the evidence in front of us objectively and impartially and without pre-conceptions. At the time therefore I did not have a great knowledge of the events that had taken place – other than from news reports – and as the mortuary was some distance from the scene of the atrocities we did not directly meet any of the relatives of the victims.

I remember being touched by the warmth of the hospitality of the people of Visoko, many of whom had suffered terribly during the war, who took us into their homes and provided hospitality and friendship. They knew, as we did, that we were performing a vitally important task – to piece together the facts that would enable the true story of these crimes to be told to the world, to bring the perpetrators to justice and hopefully in some way to help prevent such evil ever happening again.

My work in the former Yugoslavia marked the beginning of a journey for me and since returning I have been keen to ensure that the lessons that we learned, both professionally and personally, are disseminated to a wider audience and shared with the next generation of investigators. Using my knowledge and contacts within my profession we established new standards for forensic radiological investigation, and developed courses at a number of UK universities to train radiographers in forensic imaging. The emphasis of such training is not only to develop a better understanding of the scientific and legal principles but also to increase awareness of the importance of such work to the victims and their families and to prepare future investigators for the emotional impact of undertaking such work.

I have continued to advise the United Nations International Criminal Court and UK government departments on the equipment & procedures needed for large scale investigations and I have worked with teams investigating war crimes in Sierra Leone. In 2004, recognising the need for international standards & cooperation I co-founded the International Association of Forensic Radiographers together with some of the other radiographers that worked in Bosnia and as part of this we created a response team for mass incidents. This team was called upon during the SE Asian Tsunami and the London Bombings in 2005 and was integrated into the UK Disaster Victim Identification team formed in 2006.

In 2006 I was fortunate to receive a grant from the Winston Churchill Foundation to undertake research into the role of forensic radiography in South Africa, Argentina and the USA. This study was only possible due to the professional contacts that I had established whilst working on the Srebrenica Investigation and enabled me to better understand the role played by forensic science to expose the truth in the civil conflicts that took place in South Africa and Argentina. As a result of other contacts made during this research I also co-founded the International Society of Forensic Radiology & Imaging in 2012.

I have worked for a number of years with the Inforce Foundation, later becoming the CEO of this charity formed to establish a centre of excellence for the investigation of genocide. In addition to publishing a scientific textbook setting out recommendations for standard procedures for investigating mass graves, we also trained an Iraqi forensic team to examine victims of an alleged genocide in Iraq, established training courses for UK Police involved in Disaster Victim Identification at home & overseas, and undertook training for humanitarian groups seeking to recover the disappeared in Colombia. Since 2007, Inforce has worked with the Forensic Institute at Cranfield University bringing an international humanitarian dimension to the teaching of forensic science at this leading centre.

I feel honoured to have played a small part in the investigations that brought to justice those responsible for Srebrenica and hope that through the forensic identification of the victims I have helped in some way to bring closure to those who mourn them.

It is vital that such horrific events are investigated properly and documented in order that there is irrefutable scientific proof that they took place and can’t be denied. Much of the past twenty years of my life and career has been spent in sharing the experiences of our team amongst the investigators or tomorrow and trying to pass on some of the lessons that we learned in Bosnia.

However, as with many cases that I am involved with I often wondered about the victims and survivors. What happened to all those who were killed?  Were they eventually identified and laid to rest by their families? And what of the survivors and relatives?  Have they been able to find any peace and re-build their lives?  When the opportunity arose to travel back to Bosnia again, to visit the site of the atrocities, the memorial to the victims and to meet survivors and families I knew that it was something that I must do.

It was truly humbling to listen to and talk with survivors of the massacre who had lain for hours amongst the dead bodies of their murdered friends and relatives before crawling miles to safety and to listen to the testimony of the mothers who had searched tirelessly for the remains of their sons for years before finally learning of their fate. For me it underlined the importance of the work that we undertook – not only in bringing the murderers to justice in the Hague but for bringing closure and some small glimmer of hope in a better future for those that remain. 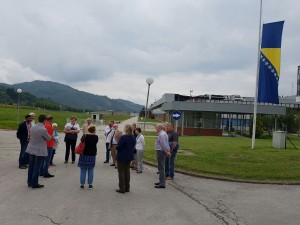 Visiting Potocari, where the Dutch troops handed over thousands of people to the Bosnian Serbs

As a part-time university tutor in radiography and forensic science I often talk about my experiences in the former Yugoslavia both in the UK and at International conferences. The opportunity to return to Bosnia with Remembering Srebrenica has enabled me to complete the picture. To understand the enormity of the crime and the effect that it has had not only on the victims and survivors but also on the country of Bosnia and the International Community. Whilst it was impressive to see the physical rebuilding of the country, there is still much work to do to restore trust and belief in a shared future amongst the population.

As in many other such conflicts around the world, attempts at reconciliation must start with an understanding of the truth surrounding the events that occurred and I believe that forensic science must play a pivotal role in this process. The lessons of Srebrenica must never be forgotten.

Oct 11, 2016Amil Khan
MAKE A DONATION
Remembering Srebrenica remains committed to honouring the victims and survivors of the genocide.