Mustafaen Kamal travelled to Srebrenica with fellow students from the London School of Economics (LSE). Mustafaen, pictured with the group, offers here a personal take on his experience in Bosnia-Herzegovina. 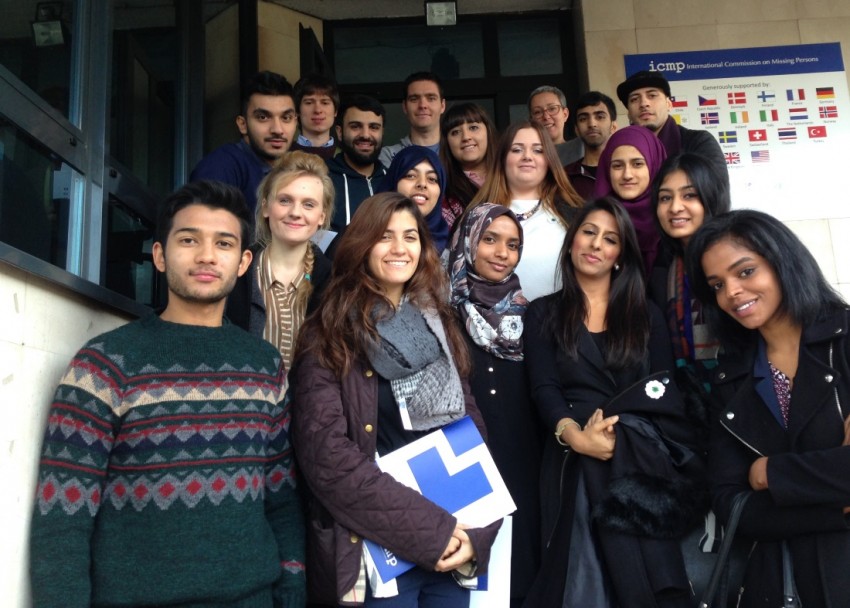 Sarajevo’s main street has the staples of an example of coexistence and harmony. A mosque, church and synagogue lie within 60 metres of each other on the main street in Sarajevo. In fact, upon the advent of the Second World War the heads of the Muslim, Christian and Jewish faiths within the city collaborated to protect a sacred Jewish text, which was under threat of destruction. However, the memories of such cohesion were destroyed in the early 1990s.

Genocide is a term that has a lot of weight behind it and no amount of words can justify the emotion and loss associated with an event, which can be described as a genocide. I was able to visit Bosnia-Herzegovina with Remembering Srebrenica and see at first-hand the aftermath of the atrocities that were committed and the utterly inspirational response of the Bosnian people. Many of the group on this ‘Lessons from Srebrenica’ visit arrived with no preconceived notions about the Bosnian genocide and at best a superficial understanding of what was one of the 20th centuries greatest tragedies and crimes. The trip was truly enlightening both in terms of understanding what happened and the emotional shadow it has cast on such a young nation.

One has to succumb to the realisation that over 8,000 people were systematically murdered and 30,000 were expelled from their homes only two decades ago, well within our lifetimes.

These events are enough to break the soul of any nation, but the resilience of the Bosnian people who have chosen to forgive is truly unparalleled.

Our tour guide, who was robbed of his early adult life, embodies this foresightedness. Resad has chosen to devote his career to displaying Bosnia’s internal and external beauty to fresh-faced visitors such as ourselves, working closely with Remembering Srebrenica in educating Britons about the horrors which occurred in his homeland, a job which our curriculum has so far failed in doing.

Artwork is one of the media by which Bosnia-Herzegovina has externalised its mourning and allowed the world to witness a tragedy that would have otherwise been resigned to the pages of history books. Although born out of a horrible occurrence, Tarik Samarah’s artwork is truly inspirational. We were able to have a tour of his gallery named “11/07/1995.” This is the day that the city of Srebrenica fell to the Serbian army and was subjected to an ethnic cleansing which left an acridness in the city air that could still be felt today. The gallery has a video booth where one can learn of the horrifying tales of suffering and more potently the sheer tenacity of the Bosnian people in refusing to be demoralised and the determination they showed in supporting each other while the world took a pervasively indolent role in diffusing the situation. One of the striking images, which has stayed with me since I visited the gallery, is the faces of 640 victims of the systematic execution which greet you as you enter the gallery. The breadth and depth of the cruelty becomes immediately clear and it only becomes more lucid when you visit the site in person.

Visiting Srebrenica itself is an experience, which words resolutely fail to summarise. They cannot convey the emotions felt when visiting the Dutch battalion headquarters, the place meant to protect the thousands of people who perished.

The facts and figures have been documented and cannot encapsulate the degree of loss which fills the hearts of the mothers, grandmothers and sisters, who we were humbled to meet, during their daily pilgrimage to the mass grave of their fallen loved ones.

I felt a sense of guilt for the gratitude they showed for spreading the word about their loss, but it was us who were in their debt for being allowed to hear their stories. They all spoke articulately and remorsefully about their experience, but their words were punctuated with a sense of hope for the future.

Our final stop was Sarajevo, the capital of the country and also a former host of the Winter Olympics. It was sad to see that a place that had been the centrepiece of global celebration had later become so lonely in the face of inexplicable atrocities. The city was under siege for three and a half years, the longest period in modern warfare. Food and water supplies were restricted and no one was allowed in or out. The impressive ingenuity of a people who would not give in resulted in the construction of an 800-metre tunnel, which ran under a UN head office and out of the city to safety. We were lucky enough to see the remains of it and saw how a small, confined tunnel was the passage to freedom for many during the war. This story is not isolated in exhibiting the Bosnian refusal to submit to a racial war, which should never have occurred. The city itself has now recaptured a lot of its energy and will no doubt overcome its terrible past and flourish in the coming years.

However, hope remains that Bosnians will overcome many of these problems with the same resolve they have shown in conquering far graver ones.

May 7, 2015Amil Khan
MAKE A DONATION
Remembering Srebrenica remains committed to honouring the victims and survivors of the genocide.