A group of London School of Economics (LSE) students took part in an educational visit to Srebrenica. Rahat Siddique, Nadia Raslan, Riz Nasrullah, Mustafaen Kamal and Anisa Ahmed travelled as part of our ‘Lessons from Srebrenica’ programme. Here, they document their thoughts on the experience. 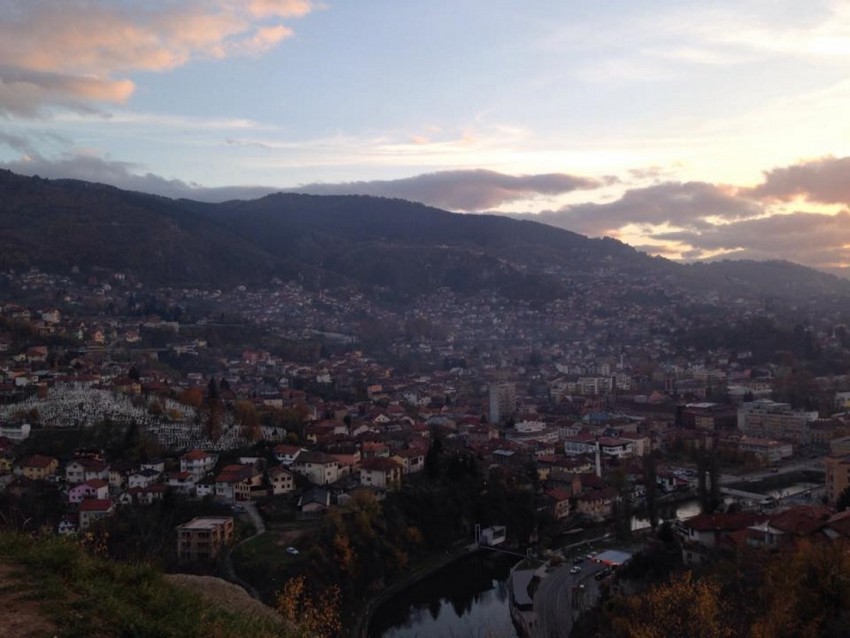 It was a truly eye opening experiencing and although words cannot do justice to the emotions felt, we have diarised what we were able to see.

When talking about the Bosnian genocide one has to realise that this occurred only two decades ago when most of us had been born. Over 8,000 people died and 30,000 were expelled from their homes due to their religious beliefs.

Although it is true that what happened was bleak, the thing, which really struck us, was the resilience of the Bosnian people who have lived through so much but have chosen forgiveness.

This foresightedness was exemplified by Resad, our tour guide, whose twenties were robbed by the war, yet he still showed immense pride in showing us around this beautiful country.

Around the world today there are millions of reported cases of missing persons from armed conflict and human right abuses. When persons go missing as a result of State actions, these individuals can be regarded as missing as a consequence of the crime of enforced disappearance. In such cases, uncertainty about the fate of missing persons can obstruct peace processes, the full implementation of the rule of law and can weaken confidence in democratic and political institutions. Effective measures to address these types of disappearances may also help prevent future atrocities.

Founded at the behest of Bill Clinton at the G-7 summit in 1996 to deal with the problem of the thousands of people missing from the Balkans conflicts, the International Commission on Missing Persons (ICMP) set out to identify, using DNA technology, the mangled human remains of the estimated 8,100 Bosnian Muslim victims of the 1995 massacre at Srebrenica scattered in mass graves around Bosnia.

Seventeen years on ICMP has identified over 85% of these, returning the bodies to grieving relatives for proper burial.

By matching blood-samples taken from living relatives with DNA extracted from bone samples taken from exhumed human remains as well as using traditional means, some 70% of the estimated 40,000 persons missing from the 1990s Balkans wars have been identified. 22 governmental donors now fund the project along with the EU, UN and Interpol.

Governments worldwide trying to cope with missing persons, from Iraq to Colombia, and from South Africa to Norway, now come to ask for the ICMP’s assistance. ICMP is one of the few Bosnian exports that are in demand.

Having arrived in Sarajevo, our first trip was to the city centre to visit Galerija 11/07/95, a memorial gallery showcasing Bosnian photographer Tarik Samarah’s work from the aftermath of the Srebrenica massacre. The date, 11th July 1995 marks the day Srebrenica fell to the Army of Republika Srpska and resulted in the ethnic cleansing and mass rape of Bosnian civilians.

On arrival we were shown a documentary entitled Miss Sarajevo, which followed a variety of Sarajevans’ lives as they navigated through the besieged city. The film captured these people’s stubborn refusal to be demoralised and insistence on living life despite the siege and the civilian targeted offense by the Serbs. This ranged from underground gigs to a beauty pageant which the film is named after, in which the contestants held up a banner “Don’t let them kill us” as an attempt to get attention from the international community.

These acts of resistance showed that although the Serbs destroyed buildings and schools, they were unable to take away the spirit and the will of the people to live and love.

The walls of the first room of the gallery is covered top to bottom with 640 personal portraits of male victims of the war, powerfully humanising the impersonal and systematic mass execution of 8372 men. The gallery consists of haunting photographs of rows upon rows of coffins and bodies, scenes of the lives of survivors, the scattered remains of the victims, broken family portraits and offensive graffiti by the Dutch UN soldiers who were supposed to be there to protect them. All the photographs on display were monochrome; the sharpness of the contrast reflected the harshness of the content of the images and the stories they told. The experience was sobering and poignant.

Following our guided tour of the gallery, Tarik Samarah spoke to us about his work and experiences and we had an opportunity to ask him questions. Through all the horrific things he’s lived through and documented, he insisted that hating on another, even an oppressor, was an admittance of one’s weakness. This inspiring sentiment of forgiveness and tolerance was echoed by many of the people we later met, despite the injustice and loss they have faced.

The journey began, early in the morning, where we drove from Sarajevo to Srebrenica in a coach. The journey was long and when we finally arrived, we went straight to the old headquarters of the Dutch battalion during the war (it has now been transformed into a memorial Centre). Here we met Hasan Hasanović, who had been a resident in Srebrenica throughout the war; he told us about his experiences, at the time only a young boy and how the city has changed since. We also heard the account of a survivor of the massacre, which was a sombre yet humbling moment for us all.

The trip to Srebrenica cemented the detailed accounts of the massacre that had been shared over the past couple of days in Sarajevo.

I remembered the voice of the one Bosnian stating ‘Srebrenica was just a grand finale of an ideology that started three years ago’.

We then progressed to the memorial and cemetery in Potočari, where we were able to meet the Mothers of Srebrenica. The Mothers are the women that lived through the war and had their fathers, son, husbands and brothers killed by the Serbs. One mother lost 43 male members of her family in the genocide. The Mothers are now extremely old, and some still wait to hear about the indemnification of members of their family even 20 years later, yet they remain resolute and strong.

Sarajevo was for centuries an exemplar city of the world, a site of religious and ethnic cohesion in a world fraught with intolerance. The city was founded in 1461 following the conquest of the Ottomans and the social legacy left is astoundingly visible as you walk through the streets of the Old Town, passing by Synagogues, Mosques, Orthodox and Catholic Churches within just a few metres of each other.

Yet the scars and bullet holes, which still mark these grand buildings, are constant echoes of the pain of the war and the end of such a remarkable period of peaceful coexistence.

The Siege of Sarajevo lasted for three and a half years, the longest siege of a capital city in the history of modern warfare. These were years of survival, mass loss and destruction where friendships were shattered by the necessity to take sides. A survivor of the siege recounted that he had only one regret, that he lost his youth. The crucial period in his early twenties which many of us are experiencing now, the freedom and unbounded fun that is a point of blissful recollection in adulthood and a time which we hark for when we are old. The sweet joys in between the transition from youth to adulthood were skipped for him, a sombre regret that he will forever have an unfinished chapter in his life.

May 5, 2015Amil Khan
MAKE A DONATION
Remembering Srebrenica remains committed to honouring the victims and survivors of the genocide.