Minister For Faith visits Sarajevo and site of Srebrenica genocide 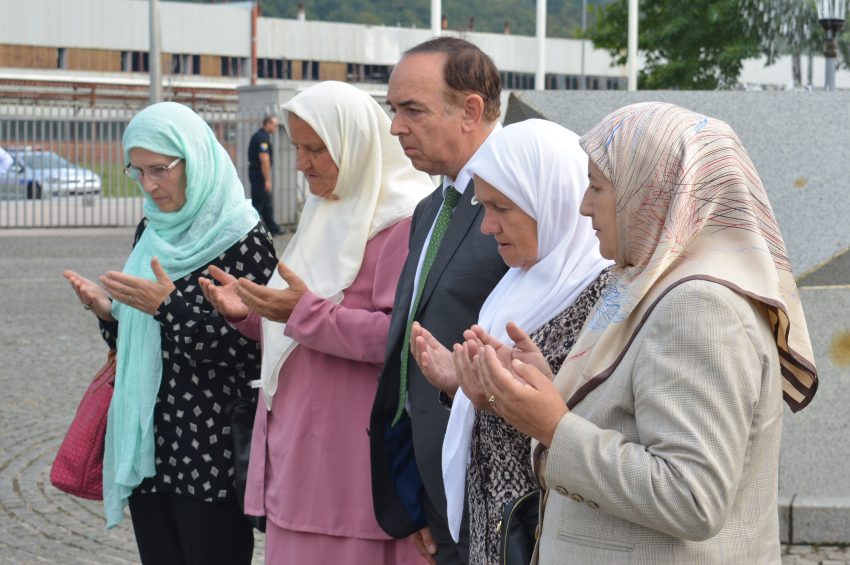 On Monday 27th August, the Minister for Faith, Lord Bourne, made a poignant visit to Sarajevo and Srebrenica– the site of the worst atrocity on European soil since the Second World War. During the visit which has been organised by the UK charity Remembering Srebrenica, Lord Bourne heard testimony from survivors of genocide and ethnic cleansing, met civic and spiritual leaders and paid his respects at the Srebrenica–Potočari Memorial and Cemetery for the Victims of the 1995 genocide.

While in Sarajevo, the capital of Bosnia-Herzegovina, Lord Bourne visited different places of worship to witness the religious diversity of the city. Sarajevo is one of the few places in the world where you can find an Orthodox Cathedral, a Synagogue and Mosque less than a five-minute walk apart.

The Minister for Faith learnt how even a city with a centuries-old tradition of multiculturalism can be torn apart by hatred and intolerance.

Commenting on his visit to Srebrenica and Sarajevo, The Minister for Faith, Lord Bourne said:

“The tragedy of Srebrenica holds vital lessons for communities across the UK and serves as a constant reminder of the importance of challenging hatred and bigotry, wherever and whenever it occurs.

“I am grateful for the opportunity to visit Srebrenica, and to meet with survivors and pay my respects to those who died. It has been hugely valuable to gain a deeper understanding of the Srebrenica genocide and to hear how different faith groups can work together to rebuild their communities.”

Lord Bourne paid his respects at the Srebrenica Memorial site in Potočari where over 8,000 Muslim men and boys were systematically killed over the course of one week because of their faith. While in Potočari, the Minister for Faith will meet the ‘Mothers of Srebrenica’ who lost sons, husbands and other male relatives in the genocide.

Dr Waqar Azmi OBE, Chair of the charity Remembering Srebrenica, accompanied the Minister for Faith on his visit to Srebrenica and Sarajevo.

“Until you see the graves at Potočari and breathe in the silence and grief, you do not truly understand the significance of the events in Srebrenica in July 1995. I am delighted to have the opportunity to attend this delegation with the Minister for Faith and pleased that Remembering Srebrenica has been able to facilitate meetings for the Minister with survivors of genocide and ethnic cleansing.

“It is my hope that Lord Bourne is able to bring all he learns in Sarajevo and Srebrenica back to government and will help Remembering Srebrenica continue to raise awareness about the genocide.”

Since being established in 2013, Remembering Srebrenica has taken over 1,200 British citizens to Srebrenica to learn about the consequences of hatred. On their return from the ‘Lessons from Srebrenica’ programme, delegates fulfil their pledge to tackle hatred by setting up social action projects and bringing communities together to remember the victims as well as becoming ‘Community.

Over the last five years the charity has brought communities together by organising almost 5,500 Srebrenica memorial activities across the UK and has educated 75,000 young people about the dangers of hatred left unchecked. It has created 1,200 Community Champions Against Hate in local communities across the UK.

Aug 29, 2018Amil Khan
MAKE A DONATION
Remembering Srebrenica remains committed to honouring the victims and survivors of the genocide.