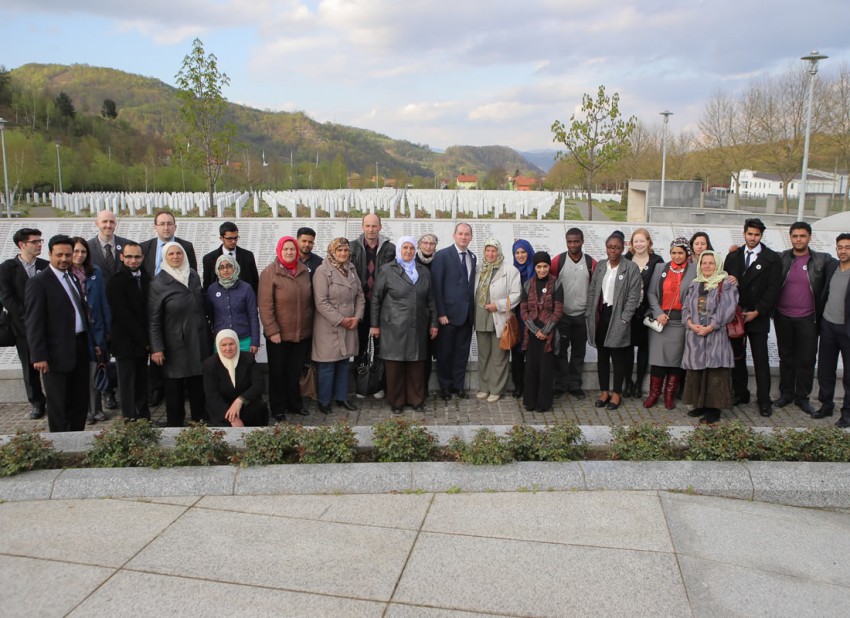 A delegation of young leaders led by Stephen Williams MP visited Bosnia as part of our Lessons from Srebrenica initiative.

It was an emotional visit for the delegates, from which they all took something that they could apply to their own lives. Meeting the survivors themselves was a particularly affecting experience because they were able to relate to individual stories on a personal level. The Mothers of Srebrenica’s ability to support one another and fight for justice, despite their mourning, inspired Ezimma Chigbo, a charity worker in London, “to fight against racism and injustice to ensure their struggle is not in vain”.

The strength, courage and hope of the survivors struck Michael Greene, head of Safe and Cohesive Communities at Kirklees Council, who came away with the sense that “despite the most horrific experience, people can start to rebuild their lives and turn hurt and anger into positive actions. It really made me think that despite how difficult things are, we as humans can find the strength and courage to continue.”

Lloyd Brown, chief of staff for Rob Flello MP, learned “the extremes of what human beings are capable of; the evil required to commit acts of genocide simply because of racial or religious differences, but also the strength of those who survived to campaign for justice and rebuild their shattered lives.”

“I will be an advocate for integration, cohesion and racial tolerance in my community and can actually understand the reason for doing so, thanks to the lessons learned in Srebrenica”  – Aaron Garvey

Mashuda Shaikh, who works on the Community Cohesion team at Kirklees Council also noted that “[the mothers’] strength and resilience is a lesson to us all”. Mashuda was struck too, by the warmth of the Grand Mufti, the senior Islamic official within Bosnia-Herzegovina, who spoke about the “difficult but important road to reconciliation”. His inspiring words also touched Aidan Stonehouse, outreach manager at Remembering Srebrenica, who was left “feeling that we can retain positivity for the future” and noted that: “[The Grand Mufti’s] words were a timely reminder of humanity at the end of an emotionally affecting visit.”

Some of the delegates were particularly inspired to take what they had learned in Srebrenica and apply it to their local community. Noordad Aziz, councillor for Hyndburn Borough Council, noted that he had learned that we have “a duty to tackle hatred and intolerance in our communities, and share the message of the Mothers of Srebrenica in our communities across the United Kingdom”.

Emma Keeling, who is currently studying for an MA in Youth and Community work, explained this sentiment further: “Perhaps the most important phrase that stayed with me is the fact that ‘Evil doesn’t have a side’. In our multicultural world, it struck me once again how important it is that we respect each other and yearn even more for community cohesion. Equally this doesn’t mean the watering down of beliefs and differences, but rather the celebration of the richness of life. It is hard to spend time with a group of miraculously brave women who have simply lost everything and to be told to ‘do good in the world’ and not sit up and take notice.”

Aaron Garvey, social entrepreneur and founder of Trapped Stars C.I.C., describing himself from a diverse innercity community that isn’t completely integrated, felt that to see “the effects [of violence] first hand in such an ‘integrated society’ lets you know that this atrocity could happen anywhere without the right knowledge, awareness or guidance”.

Finally, Husna Rasul, who works in international development, believed that the most powerful messages were to be found in individual reactions to war – one of which was from our Bosnia coordinator Resad Trbonja who summed his feelings up on the conflict succinctly, noting “war… nothing is worth it”.

Disgraceful to see children at a school in Srebrenica celebrating Chetniks. Such behaviour is part of a wider and worrying trend in which we are witnessing an increasing number of provocative acts that have caused much distress amongst the local community https://t.co/7pIY0OPP1n

Delighted that phase two of the pioneering conflict transformation & Srebrenica programme has been launched which will provide over 20 further participants with a unique opportunity to be part of a powerful & unique learning experience. https://t.co/FiJleS5jF5 #MEASrebrenica

'This experience has hardened my resolve to bring all our communities together so that never again can such horrors take place'. Powerful speech in Parliament from our community champion @charlotte2153 who spoke about the impact of her visits to Auschwitz and Srebrenica.

I spoke in Parliament in Thursday's emotional Holocaust Memorial Day debate, on my experiences visiting Auschwitz and Srebrenica, and standing together.