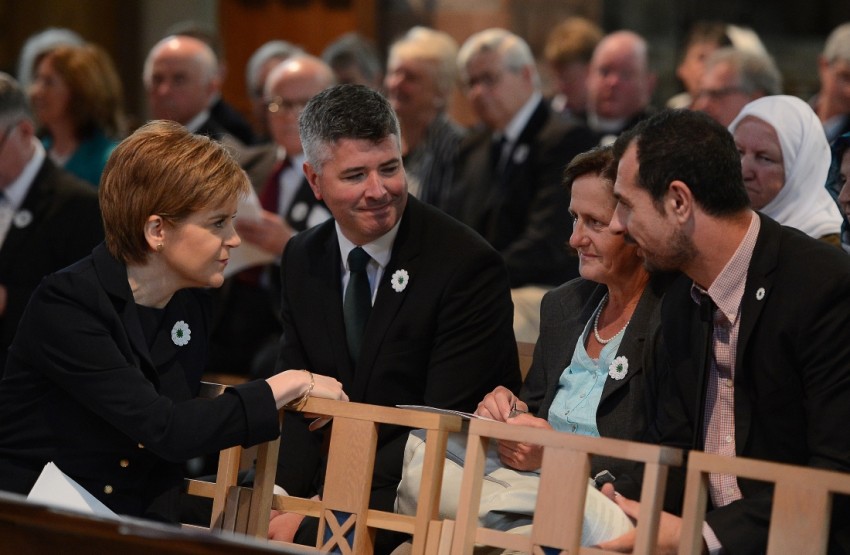 The service at the Cathedral was organised by the Scotland Board of the UK charitable initiative Remembering Srebrenica, working with the First Minister’s office.

It was attended by a genocide survivor with Srebrenica mothers, who lost husbands, sons, fathers and brothers in the worst atrocity on European soil since the Second World War, which saw over 8,000 mainly Bosnian Muslim men and boys systematically murdered.

The service on Friday 10 July was part of a series of high-profile events across the UK to commemorate the genocide in the week leading up to 11 July – Srebrenica Memorial Day. Her Royal Highness The Princess Royal representd the UK in Bosnia and Herzegovina at the Srebrenica-Potočari Memorial Complex on that day.

The First Minister spoke at the service, which was led by the The Rt Rev Dr Angus Morrison, Moderator of the General Assembly of the Church of Scotland. Faith and community leaders, as well as representatives from Scotland’s Youth Organisations, took part in the service honouring the victims and survivors of the genocide.

Today, two decades on from the genocide at Srebrenica, we honour both its victims and survivors in our commemorations.

We must also pause and realise the real consequences of allowing hatred and division to go unchallenged. We must recognise our responsibility to ensure that diversity is celebrated and protected so that everyone, regardless of their race, faith or nationality, can feel safe and be safe in their own communities.”

The St Giles’ service was followed by a reception at nearby Parliament Hall, hosted by the First Minister, to welcome the Bosnian visitors to Scotland.

It crowned a week of commemorative events including a service at Westminster Abbey, London, on Monday and the Welsh Assembly Building, in Cardiff, Wednesday. People also gathered at City Hall, in Belfast, on Sunday 5 July to mark the beginning of Srebrenica Memorial Week.

Today’s service gave the people of Scotland the opportunity to stand alongside our brothers and sisters from Srebrenica in their pain and continued fight for justice. Their stories remind us that Srebrenica was the black hole of humanity and marks our failure in letting such genocide happen in our lifetime.

“But we dispelled the darkness of this inhuman crime with representatives from our youth organisations praying for the future, whilst leaders from our faith communities lit candles symbolising our dedication to work together for peace and respect for our common humanity.”

Srebrenica Memorial Week leads up to the EU-wide day of remembrance on 11 July and will include a range of some 150 regional events across the UK. From Bradford to Birmingham, Surrey to Stoke-on-Trent volunteer organisers are holding memorial events, poetry readings, exhibitions and more.

Srebrenica Memorial Day commemorates the men and boys systematically murdered in the small town in eastern Bosnia and Herzegovina in July 1995, during the Balkans conflict of 1992 – 1995.

This year is the 20th anniversary of the genocide that occurred in Srebrenica – the single greatest atrocity committed on European soil since the Second World War and a brutal reminder of man’s inhumanity to man.

“The magnificent memorial service in Scotland is about honouring the victims and learning the lessons from the past to help illuminate the future by involving people of all faiths and none to help build a better, safer and cohesive society for all.”

Remembering Srebrenica’s Scottish Board was established in March this year. The charitable initiative raises awareness of this genocide in the UK. It works with individuals and organisations to help strengthen British society by learning the lessons of history to help tackle hatred, racism and intolerance wherever it occurs.

Jul 10, 2015Amil Khan
MAKE A DONATION
Remembering Srebrenica remains committed to honouring the victims and survivors of the genocide.