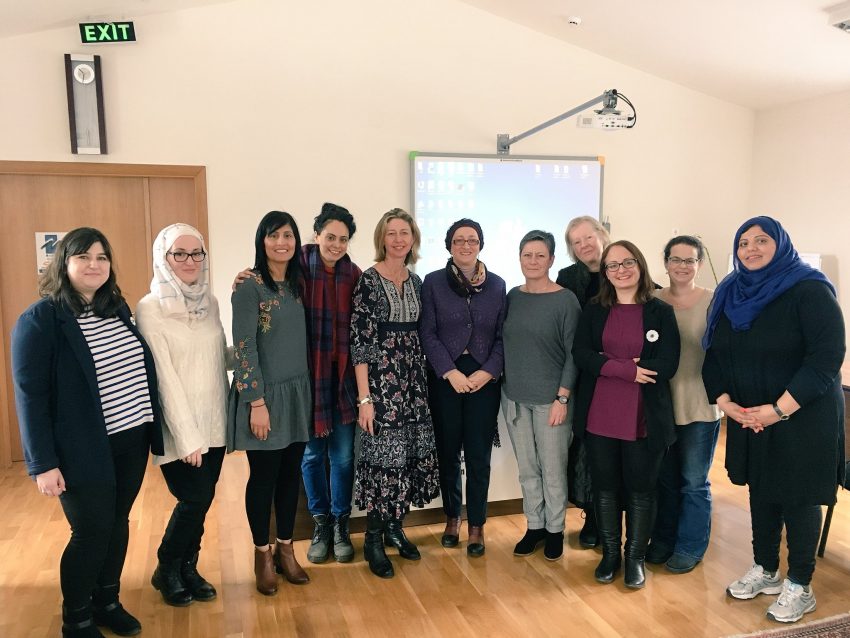 An influential delegation of women, who are all leaders in their fields, travelled to Srebrenica in Bosnia-Herzegovina (BiH) on Sunday 18th March. Over a four-day programme, delegates learnt how lessons from the worst atrocity on European soil since World War Two can be used in their work to prevent violence and discrimination against women in the UK.

Amongst the group who travelled to BiH, are The Times War Correspondent and Co-Author of I am Malala Christina Lamb,  Rabbi Deborah Kahn-Harris who is Principal of Leo Baeck College in London and Nicki Norman of Women’s Aid Federation England.  Also in attendance were Pavan Amara, founder of the ‘My Body Back’ project that supports women who have experienced sexual violence and Professor Nicola Slee, Director of Research at the Queen’s Foundation for Theological Education in Birmingham. This delegation coincides with Women’s History Month, which is held in March every year.

Commenting on the ‘Lessons from Srebrenica’ delegation, Rabbi Kahn-Harris said

“It was so important for me to come on this visit and bear witness to the trauma that has happened in Srebrenica.  Coming from the Jewish community, I know how often we say never again, then to come here and find it has happened again is very difficult.

It was so important to hear these stories, but its also vital for me now to focus on how do we in the UK work together, not just as Jews or Christians or Muslims but across all the things that divide us as human beings to ensure these things happen never again.”

‘Lessons from Srebrenica’ delegates learnt about the genocide in Srebrenica which happened 23 years ago, when General Ratko Mladić and his Bosnian Serb forces marched into the town of Srebrenica, systematically murdering over 8000 Bosnian Muslim men and boys and raping thousands of women and girls. The delegates heard the testimonies of genocide survivors such as Dr Fatima Dautbašić-Klempić, a gynaecologist and the only female doctor in Srebrenica during the genocide. This delegation also sought to highlight the issue of violence against women in the UK.

Founder of the ‘My Body Back’ Project, Pavan Amara said

“This visit to Srebrenica has truly moved me but has also helped me to understand what people who have been through genocide have experienced. In my own work, it will help me greatly when I am treating refugee women and the range of issues those who have been through conflict face and how we must help with all aspects of that and the long-term impacts this can have.

It has been so important to come here, hear these stories, learn from people and take these lessons back to the UK.  I have been deeply saddened by what we have seen, but also so inspired by the work that is being done”

This year, Remembering Srebrenica will be holding events and ceremonies to mark the 23rd anniversary of the genocide between 8th-15th July, which will include a UK Commemoration at the Guildhall in London, faith and interfaith events at churches, mosques and synagogues, concerts, art exhibitions, film screenings, a football tournament, peace walks, school workshops and assemblies.

Remembering Srebrenica’s theme for commemorations this year is ‘Acts of Courage’. Commenting on this and her experience of the ‘Lessons of Srebrenica’ delegation,

“There are so many acts of courage I have seen whilst in Bosnia, particularly of people giving back and supporting others. But there are many women who experienced horrific sexual violence, death and trauma and still cannot speak about what happened to them and remain silent, yet are getting on with life, supporting their children, building communities.