Community leaders and teachers from across Manchester have vowed to take action in their communities to tackle hatred and intolerance after returning from a powerful and moving visit to Srebrenica. 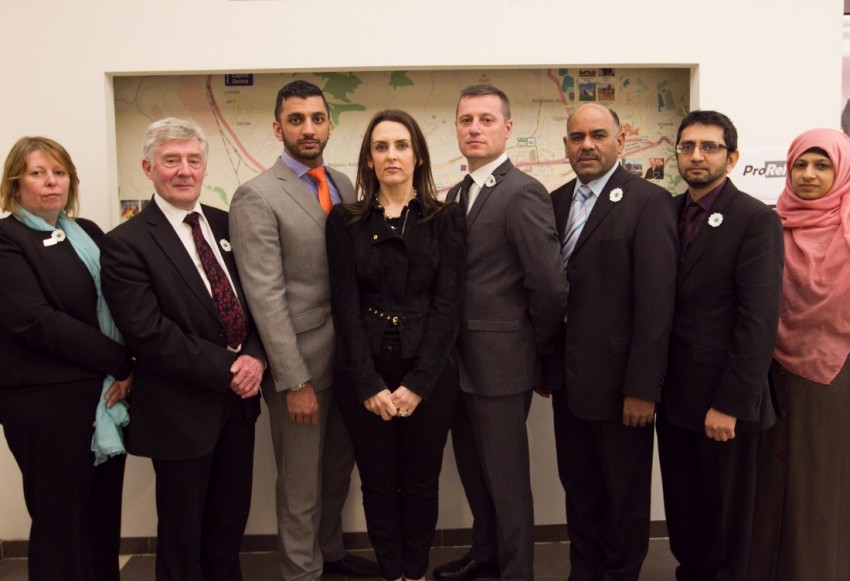 Moved by the experience of meeting survivors of the 1995 genocide – as well as listening to the stories of women whose husbands, brothers, fathers and sons were killed – they have pledged to keep alive the story of the atrocity.

They travelled to Bosnia-Herzegovina this week as part of the educational visits programme organised by Remembering Srebrenica. The UK charitable initiative is dedicated to raising awareness of the genocide, which saw 8,372 men and boys systematically murdered.

As well as meeting survivors and the Mothers of Srebrenica, during the four-day visit, the 18-strong group visited the Srebrenica-Potočari Memorial Complex where some 6,200 genocide victims are buried.

They also visited the International Commission for Missing Persons (ICMP), in Sarajevo and Tuzla, which has played a key role in uniting families with their loved ones’ remains.

Delegation leader Elinor Chohan is from Hale Baines and an active member of the Muslim community in Altrincham.

She said that the group is now planning a civic memorial service in Manchester during Srebrenica Memorial Week, in July, along with commemorations in religious institutions across Greater Manchester. Teachers are looking at using educational materials relating to Srebrenica in Manchester schools.

“We simply could not believe that such a terrible thing could happen 50 years after the Holocaust in such a well-integrated, multi-cultural European community,” she said. “If it happened in Bosnia, it can happen anywhere. The visit renewed our determination that we must learn from this.”

We need to be active in educating our communities about the dangers. It’s hard to comprehend how neighbours could fight neighbours. Meeting the Mothers of Srebrenica and feeling their pain and loss was a stark reminder of the atrocity. We cannot let this happen again.”

Carol Powell, Principal of Gorton Mount Primary Academy, in Gorton, said that her experience in Srebrenica would inspire her to work with colleagues at her school and the seven others in the Bright Futures Education Trust to introduce Srebrenica themes into lessons.

“Now that I am returning to Manchester, I would like to use Srebrenica-based resources as part of the social, moral and cultural curriculum at Gorton Mount and in sister schools across our Academy.”

Greater Manchester’s Police and Crime Commissioner Tony Lloyd was also part of the delegation. He was visiting Srebrenica again – almost a decade after he accompanied the first group of refugees who returned to their homeland following the genocide.

“This is a very powerful experience,” he said. “We met family members whose sons, brothers, husbands and fathers were murdered in the prime of life. How could this have happened in an integrated society? The lesson for us is that the cost of not learning to live together is enormous.

“I want to convey to the people of Manchester the horror of the human tragedy, but also share the humanity of those trying to rebuild Bosnian society. We want to use the experience of a significant Manchester delegation to share the lessons from Srebrenica with our communities.

“In this 20th anniversary year of the genocide, we’re looking to host a showpiece event in Manchester, as well as using all our backgrounds to lend support to ongoing action across all our communities. This must never happen again.”

Remembering Srebrenica organises the UK Srebrenica Memorial Week, which leads up to the EU-wide day of remembrance for victims of the genocide, Srebrenica Memorial Day, on 11 July. Its educational visit programme sees delegates pledge to organise projects in their communities to strengthen community cohesion and create a better society.

“Srebrenica demonstrates what happens when an integrated society disintegrates. The visit of our Manchester delegates to Srebrenica will, undoubtedly, inspire them to apply the lessons of history in strengthening and protecting the diverse communities of Greater Manchester.”

May 6, 2015Amil Khan
MAKE A DONATION
Remembering Srebrenica remains committed to honouring the victims and survivors of the genocide.