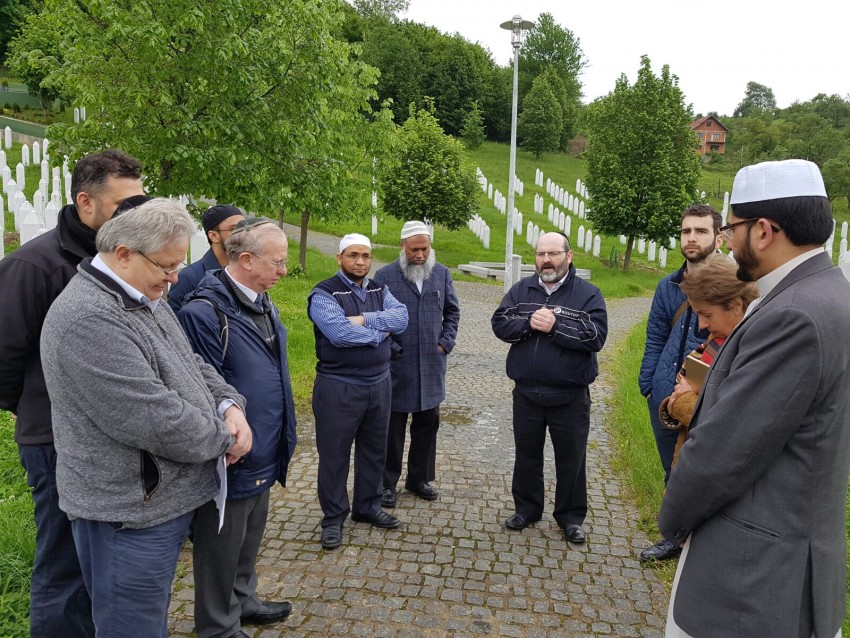 A group of senior Jewish and Muslim faith leaders have taken part in an interfaith “Lessons from Srebrenica” delegation this week to learn how lessons from the worst atrocity on European soil since World War Two can be used in communities across the UK to help create a better, safer and stronger society.

The senior Rabbis and Imams, all of whom are members of the National Council of Imams and Rabbis of the Joseph Interfaith Foundation, travelled to Bosnia with the UK charity Remembering Srebrenica who help people learn lessons from the genocide in order to build strong communities relations in Britain and to demonstrate where hatred and prejudice can lead.

The group learnt about the genocide in Srebrenica which happened 21 years ago when General Ratko Mladić and his Bosnian Serb forces marched into the town of Srebrenica and systematically murdered 8372 Bosnian Muslim men and boys. The faith leaders heard from survivors of the genocide and relatives of the victims, as well as the British Ambassador to Bosnia and Herzegovina and officials from the International Commission on Missing Persons which has spearheaded the effort to locate and identify the 40,000 people who went missing during the conflicts in former Yugoslavia.

The faith leaders have all pledged to return to their communities and hold events to encourage their congregations to celebrate diversity and live together harmoniously with people of all faiths and none.

The delegation was led by Mehri Niknam MBE, Executive Director of the Joseph Interfaith Foundation that is committed to fostering engagement through constructive and realistic dialogue and interaction between the Muslim and Jewish communities in Britain.  She reflected upon the important lessons learned on the visit saying:

“The work of Remembering Srebrenica is vital in helping us not only to mark the anniversary 21 years on from the brutal genocide, but to learn the lessons and take action alongside our friends, families, neighbours and colleagues to celebrate our multi-faith society in opposition to those who spread messages of hatred and division. All the participants in this visit have returned even more determined than ever to do this and ensure that people of all faiths live happily and peacefully in a cohesive society.”

“Taking faith leaders such as these on our programme sends a powerful message that, 21 years after the genocide, we are determined not only remember the victims, but to take action to prevent similar atrocities happening again.

“This year we are saying that it is time to act. Never has it been more important for us to learn the lessons from Srebrenica. We must take action to build better and safer societies for all, otherwise those who spread divisive messages will go unchallenged in their efforts to breed hatred and intolerance.”

The ‘Lessons from Srebrenica’ educational visit programme will be taking a number of high profile delegations out throughout the next three years. This year the participants include MPs, faith leaders, teachers, barristers, journalists and students all of whom pledge to organise projects in their communities to strengthen community cohesion and create a better society on their return.

May 18, 2016Amil Khan
MAKE A DONATION
Remembering Srebrenica remains committed to honouring the victims and survivors of the genocide.