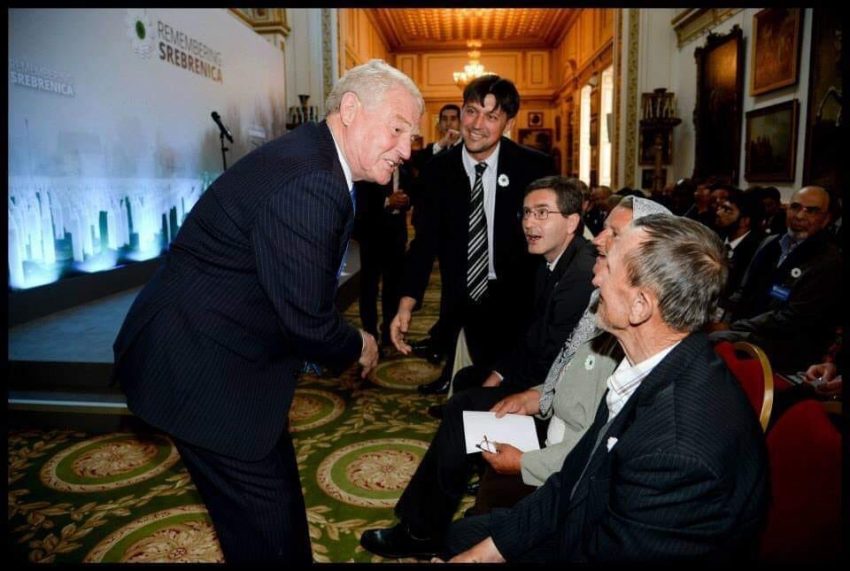 We are deeply saddened by the death of our friend and loyal supporter, Lord Paddy Ashdown. He has been one of the strongest supporters and advocates for Remembering Srebrenica and the Bosnian people in recent times. At a time when few were prepared to hear about Bosnia-Herzegovina and its suffering, Lord Ashdown repeatedly called for international intervention and an end to the years of bloodshed.

After the war, Lord Ashdown returned to Bosnia-Herzegovina where he served as the country’s High Representative from 2002 – 2006, a role he embraced with a purpose and determination to remember those who were so brutally killed and to support their loved ones who had survived. It was not part of Lord Ashdown’s job as High Representative to create a memorial at Srebrenica, yet he did so, seeking the funding from the international community and working with the Mothers of Srebrenica to create a memorial to the thousands of victims of genocide. Years later at a Srebrenica memorial event, he described this act as one of the proudest moments of his life.

As well as helping to build a memorial for the victims, Lord Ashdown was passionate about helping survivors to return to the land they had been ‘ethnically cleansed’ from. He personally stayed with some of the returnees to Srebrenica to “pay homage to the sheer courage of those people who have come back”.

Upon stepping down as High Representative in 2006, Lord Ashdown continued to speak up for Bosnia, advocating for its people in the House of Lords, the media and speaking at numerous Remembering Srebrenica commemoration events, most notably at the 20th anniversary of Srebrenica Memorial Day at Westminster Abbey.  At his moving speech, Lord Ashdown said:

Nothing can diminish the culpability of those who perpetrated this genocide, but in condemning this evil, it is right also to acknowledge our passive complicity as members of the international community for what happened in the UN safe haven of Srebrenica. We could have prevented this horror. We chose not to.”

Today, the world has lost one of its most powerful voices for Bosnia who stood up for the victims and survivors of genocide. I admired his energy, passion and determination to make a difference.  We mourn with his family and thank him for all he did”.

Dec 22, 2018Amil Khan
MAKE A DONATION
Remembering Srebrenica remains committed to honouring the victims and survivors of the genocide.