A special event hosted by Ruth Davidson MSP and Johann Lamont MSP at the Scottish Parliament brought together MSPs from all parties who pledged to remember the victims of genocide in Bosnia-Herzegovina and bring communities in Scotland together to tackle hatred.

Yesterday’s White Armband Day marked the 25th anniversary of the decree being issued by Bosnian Serb authorities in Prijedor that non-Serbs must mark their houses with white flags or bedsheets and wear white armbands when leaving the house. Just over 50 years after the Nazi decree that required Jews to wear a yellow Star of David to segregate them from the non-Jewish population, once again members of an ethnic or religious group were marked for extermination.

Ruth Davidson MSP explained why it was important to hold this event: “I became involved with Remembering Srebrenica after travelling to Bosnia with them to meet genocide survivors and relatives of those who died. They want to share their stories because the lessons of what happened there are still so relevant today and can be used in tackling the problems in other countries. 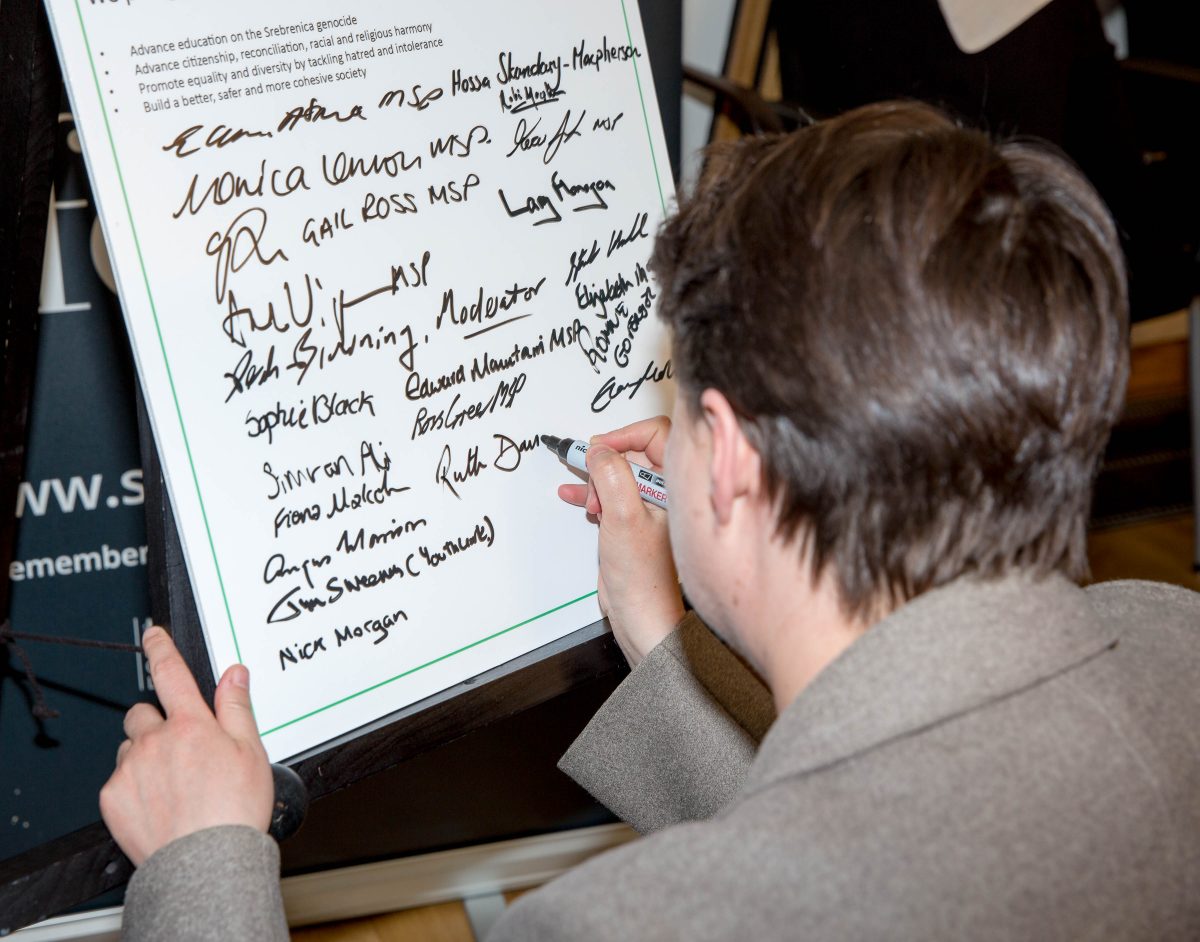 As MSPs, we must all be bold in leading efforts to tackle hatred and bring our communities together.”

Johann Lamont MSP added: “Genocide is a gradual process, the seeds of which are sown when social and cultural differences are not celebrated, but used as reasons to exclude or marginalise. To think that, only 25 years ago, people were being marked for extermination in the heart of Europe purely on the grounds of their faith just 50 years after The Holocaust is horrendous.

We need to ensure that our young people learn about this and do everything we can to stop it from happening again.”

MSPs attending the event all signed a pledge to honour the victims of genocide in Bosnia-Herzegovina and promote Remembering Srebrenica’s education pack, which has been tailored by the Scottish Government to the requirements of the Curriculum for Excellence. This resource is designed to raise awareness of the potential for ethnic tensions to escalate into violence and promote learning of the lessons from the past.

Remembering Srebrenica Scotland Chair, The Very Rev Dr Lorna Hood, said: “I would like to thank the Scottish Government for their help in tailoring this wonderful educational resource for Scotland. With their help and the support of leading politicians such as Johann and Ruth, as well as the cross-party endorsement that our work has gained, we can ensure that more young people in Scotland learn the lessons from Srebrenica to build stronger, more cohesive communities.”

White Armband Day is marked by Bosnian communities across the world on 31st May, not only to remember the victims, but also to raise awareness of continuing human rights violations taking place in the area today. To this day, local authorities in Prijedor have refused to permit the construction of a memorial for the innocent civilian victims killed in the notorious concentration camp at Omarska or a memorial to the children that were killed in the war.

Remembering Srebrenica Scotland Secretary and Treasurer, David Hamilton, was also representing the charity at an event at the Institute of Foreign Affairs in Stockhom, Sweden on 31st May.

Jun 1, 2017Amil Khan
MAKE A DONATION
Remembering Srebrenica remains committed to honouring the victims and survivors of the genocide.

Number of confirmed cases of #COVID19 in #Bosnia now at 89.
First 3 cases registered in #Sarajevo. https://t.co/IuVaSxji6e

So many emotions after a long day of hearing stories of horror and such visceral courage. I imagine that my own reflections are going to take a while to unfold but I hope I can to bring back just a snippet of the wisdom I managed to witness through the survivors. @RemSrebScot

@InterfaithScot @RemSrebScot delegation watching harrowing film of events at @SrebrenicaMC. No matter how often I’ve watched it, I still find it emotionally disturbing & upsetting. And suspect always will.

@InterfaithScot delegation with @RemSrebScot stopping at usual petrol station for coffee on way to Tuzla & Srebrenica.

So glad I had time to meet with @RTrbonja on our @RemSrebScot delegation. He sends his love to Scotland.