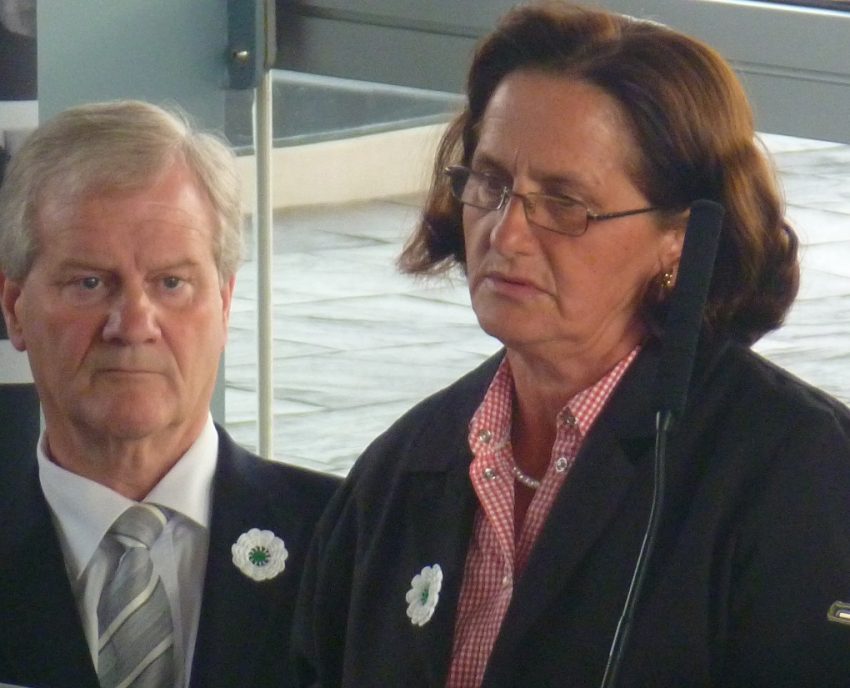 The commemorative event at the Senedd was organised by Remembering Srebrenica. It was one of three official commemoration events in the UK including Westminster Abbey, in London and St Giles’ Cathedral, in Edinburgh.

Four Mothers of Srebrenica – who lost husbands, sons, fathers and brothers in the atrocity – and a genocide survivor took part in the event on Wednesday 8 July.

Some 120 people from across communities in Wales gathered to listen to Mother Nura Begović – pictured above with Master of Ceremonies Howard Tucker – and survivor Nedžad Avdić speak about their moving and harrowing experiences of the genocide.

“I, along with colleagues in the Assembly, were guests of Remembering Srebrenica in Bosnia in April where we heard harrowing first-hand accounts from survivors and the mothers of those killed,” said Deputy Presiding Officer, David Melding AM.

It is still hard to believe that this happened in Europe just 20 years ago. I am proud that the National Assembly will play its part in ensuring that we never forget. We will welcome survivors to the Senedd to remember what happened in the killing fields of the Balkans just two decades ago.”

The Deputy Presiding Officer led a delegation of AMs to Bosnia in April, where they laid a wreath at the Srebrenica-Potočari Memorial Centre.

First Minister of Wales, Carwyn Jones said: “Some of the darkest moments in Europe’s recent history, we will not forget Srebrenica here in Wales. We want to live in a society that spurns prejudice and embraces tolerance, that’s why it’s so important we remember and ensure that the intolerance and religious and racial hatred that took place in the Balkans, only twenty years ago, will never be repeated.”

Dr Waqar Azmi OBE, Chairman of Remembering Srebrenica said: “This year is the 20th anniversary of the genocide that occurred in Srebrenica – the single greatest atrocity committed on European soil since the Second World War and a brutal reminder of man’s inhumanity to man.

“Memorial events in Cardiff and across the UK will not only commemorate those men and boys who were systematically murdered in Srebrenica, but allow those present to consider how they might make a personal contribution to help build a better, safer and stronger society through learning the lessons of history.”

Jul 9, 2015Amil Khan
MAKE A DONATION
Remembering Srebrenica remains committed to honouring the victims and survivors of the genocide.