It is said that there are five stages of grief: denial, anger, bargaining, depression, and acceptance. For some women in Bosnia, the stages are on loop. For every time a woman thinks she has buried the remains of her husband or her son, another piece of him resurfaces, and she must re-live the anguish all over again. 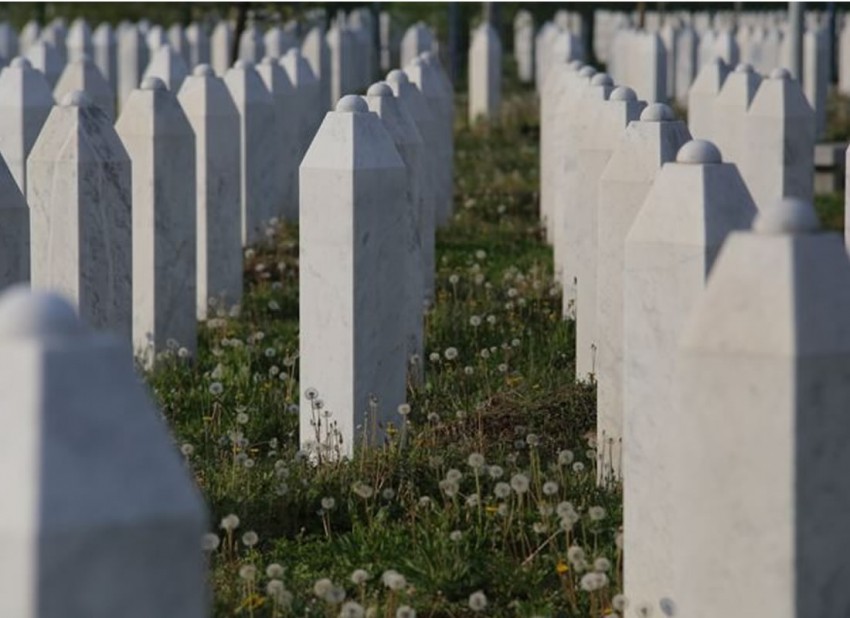 DISCLAIMER: Please be advised some of the images are graphic and disturbing.

It is said that there are five stages of grief: denial, anger, bargaining, depression, and acceptance. For some women in Bosnia, the stages are on loop. For every time a woman thinks she has buried the remains of her husband or her son, another piece of him resurfaces, and she must re-live the anguish all over again.

What is ironic though is that to retrieve her loved-ones from the blood- shed they were lost to, she must first give more blood. The International Commission of Missing Persons (ICMP) has taken 71,195 blood samples from the families of the missing since it was established in 1996. Matching DNA from blood and bone samples has become the only accurate way to identify the thousands of Bosniak bodies recovered from mass gravesites.

At the end of the Balkan wars, a staggering 40,000 people were estimated to be missing. Almost all of them were thought to have disappeared as a direct result of human rights violations during the war. So far, 91 mass gravesites have been uncovered in Srebrenica alone, yielding 6,877 positive identifications out of a possible 8,100 reported missing.

“We uncovered the remains of one man in four different gravesites, 50 kilometers apart. We had to carry out 13 separate DNA tests to identify him.”

The remains of victims are not only found in gravesites, but on ‘surface sites’ such as caves and rivers. Five hundred and twenty victims were identified last year alone; among them were six children and four women. Adam Boys, Chief Operating Officer of the ICMP, has lived in Bosnia for almost 20 years. “My children were born here, and sometimes it’s difficult to explain to them exactly what happened.” Boys, a Scotsman, arrived in Bosnia in the midst of the conflict. He explains that the foundation of the ICMP is as much political, as it is social. “The basis of the initiative is to remove any political barriers to the peace process. Our objective is to put pressure on the governments to work together and ultimately, to take responsibility for the process.” The ICMP currently operates the world’s largest DNA human identification facility. However, the process of identification has not been easy. “The families are also victims of the crime.

They have to be sure that their genetic data will be protected, that it will only be used for the purposes of identification, and that it will not be shared unless they give their permission.” Ethnic tensions are still rife in Bosnia. With the Srebrenica massacre targeting Bosniaks (Bosnian Muslims) in particular, it is unsurprising that some families may be weary of providing a blood sample, which reveals their identity to a Bosnian Croat, or Serb. This mistrust, and fear that their sample may, for example, be somehow polluted to prevent a positive match, is being tackled directly by the ICMP through a barcoded system, which conceals the identity of the sample.

Beyond this, the initiative places a direct emphasis on ensuring successful multiethnic interaction through the identification process. “Our aim with this initiative was to get all Bosnians – regardless of their ethnicity – looking for other Bosnians. By giving their blood samples, these families are making a very strong political statement: they want to know what happened to their loved ones. And we all share a common responsibility in searching for those answers.

The commitment to ensuring validity in testing has led to the development of a complicated yet efficient identification process. “We have a facility housed in a large sports center in Tuzla where we collect all the blood samples. Requests are sent out all over the world to relatives of the missing person. Those who provide a blood sample are then asked to fill in a form documenting their kinship to the deceased.

Asingle spot of the blood sample is then placed on chemically treated paper, which protects the DNA within the blood. Each blood sample is given a unique bar- code, correlating with the family details. The samples are then sent off to our lab in Sarajevo, and then they are cross-referenced with the genetic profiles in our database to determine a match.” The procedure is lengthy, and costly. Since 2000, the operation has cost approximately £5million annually. This includes the cost of running the DNA labs, as well as the teams sent out on excavations to recover bodies. “We have an expert team of archaeologists, who are sent out to mass gravesites to ensure any mortal remains found are handled with care.” A small section of any bone recovered is then sent to a lab in Banja Luka to be pre- pared for analysis, and then sent back to Sarajevo for DNA testing. Once that process is complete, the results are sent to Tuzla to deter- mine a match. “In Srebrenica in particular, we use approximately seven DNA tests per single set of remains.” This practice has become necessary after the mass reburial effort led by the Bosnian Serb Army.

Several months after the Srebrenica massacre, the US Secretary of State released a statement, which alluded to the US being aware of the mass gravesites the Bosnian Serb Army had erected from satellite photos the US had taken. To hide the remains again, a division of the Bosnian Serb Army issued an organised effort to dig up primary mass graves using heavy equipment. This ‘reburial’ of graves was carried out during the night, with several gravesites in Srebrenica being dug up, and remains moved to secondary, sometimes tertiary sites. As a direct result of this, multiple DNA tests have become necessary to correctly identify numerous remains of the same victim, scattered in different gravesites. “We uncovered the remains of one man in four different gravesites, 50 kilometers apart. We had to carry out 13 separate DNA tests to identify him”, Boys recounts. Some gravesites have yielded a mixture of partial remains only, making the process of recovery and identification even more painstaking and complicated. Until then, the remains of victims are kept in large mortuaries in Sarajevo and Tuzla. The forensic science behind the process is of little significance to those awaiting phone calls, however.

“Every time a woman thinks she has buried the remains of her husband or her son, another piece of him resurfaces, and she must re-live the anguish again.”

For them, grieving for loved ones has become more of a game – a jigsaw puzzle of anatomical remains they first must assemble, in order to move onto the next level – burial. In the event that only partial remains have determined a match, the process becomes even more difficult. “There are some families who simply refuse to accept the results in the hope that their loved one is still living,” notes Boys. “They’ll say ‘well, you only found an arm. That doesn’t mean they’re dead.’” For those who choose to bury the partial remains, if further remains are uncovered, the Bosnian authorities take responsibility for re-exhumation. But for some, funerals are an unattainable privilege; they have waited years for even a fragment of bone, or a lock of hair – something to show that those they loved once lived. Then there are those who are yet to be reported missing. “Entire families were massacred; lineages were wiped out. So, some are simply not reported missing because there is no one living to file the report”, explains Boys. To attain some fragment of closure, the families of the dead convene on 11th July every year to bury what remains of their loved ones at the Srebrenica- Potočari Memorial Center.

This commemorative act is healing and simultaneously painful, as families of the massacre share their grief. Last year, genocide survivor Mujo Musić was finally able to bury his 26 year old son. “We escaped through the forest when Srebrenica fell”, recounts Mr. Musić. “When we reached Snagovo, they started firing at us from Kula. Eight people were killed, including my son. His body remained in the field. I found two bones. I have buried many relatives already. My wife died of grief. I do not know what to do any more.” Another woman buried only four bones of her deceased husband, for that is all that was found of him. But with every year, the amount of green coffins carried for burial is decreasing. Yet, considering the scale and sheer brutality of the massacre, it is difficult to estimate when the work of the ICMP will be complete. Recently, an officer tried and convicted at the International Criminal Tribunal for the former Yugoslavia (ICTY) was asked to estimate the number of Bosnian Serb soldiers who had committed war crimes. He answered, “20,000”.

To date, out of those probable 20,000, a mere 500 have been convicted. For the families of the victims, justice is a distant hope. All they ask now is to be reunited with a single piece of their loved one, so that they may finally have a grave at which to grieve.

The ICMP is funded through voluntary grants, donations, and contributions. Find out more by visiting www.ic-mp.org